This guest commentary was written by Julie Zimmerman, Jeanette Howard, Jon Rosenfield, and Rene Henery in response to The Final Demise of Unimpaired Flows, guest commentary by Robert Shibatani

As river ecologists that work on environmental flows, we’re often confused by the strong reactions we hear at the mention of unimpaired flows. In general, we do not advocate for, nor have we ever experienced discussions contemplating allocation of 100% of unimpaired flow to the environment in rivers that support other critical, beneficial uses. Our work, and the discussions we are party to, are focused on leaving a portion of the unimpaired flow in a river to mimic natural patterns of variability while allowing a portion of the water to be diverted for human use.  In fact, our current water rules in California (and elsewhere) are all hydrologically-sensitive, meaning they change by season and year type to reflect hydrology and allow diverters to still divert in drier years. For example, D-1641 – water quality rules that govern flows into, through, and out of the Delta – is based on unimpaired flow at a coarse scale. What’s potentially different about the “unimpaired flow” approaches currently under discussion are that they would apply on a shorter time step (e.g., weekly) and at a finer scale (a continuous percentage, rather than a blocky year type). This would retain more of the natural variability in river flow.

Aquatic and riparian species co-evolved with the dynamic hydrology of unimpaired rivers. A great wealth of recent research demonstrates that, in the absence of those unimpaired conditions, mimicking the natural variability in river flows is essential to support species taking advantage of their evolutionary and adaptive survival tools, and achieving a positive biological response. Other environmental flows approaches, such as functional flows, are also based on unimpaired hydrology. As defined in the recent literature (see https://ceff.sf.ucdavis.edu/), functional flows are those aspects of the flow regime that directly relate to ecological, geomorphic, or biogeochemical processes in riverine systems, and all functional flow components must be incorporated into flow prescriptions to be ecologically protective. In our application of functional flows, key ecologically-relevant flow components (dry season baseflows, fall pulses, wet season baseflows, wet season pulses, and spring recession) are based on the unimpaired hydrograph. As opposed to an approach that overengineers flows and ignores key ecosystem processes (which some have inappropriately termed “functional”), this functional flows approach defines and accounts for hydrologic variability inherent to all rivers and streams. 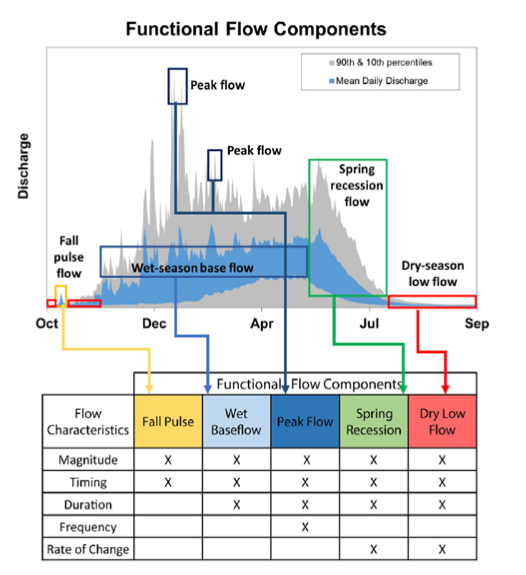 River ecosystems are an interplay of flow, landform, and vegetation that form habitat, and organisms that make up the food web. A change in any of these components has consequences for living things. Native and endemic species are found in local rivers because they have adapted to specific natural conditions in those locations, including natural flows, variability in those flows, and the habitats created by the interaction of flow with the landscape.

From an ecologist’s perspective, river habitat and species population sizes and life histories were shaped by unimpaired flow patterns (including volume and natural variability) across seasons and years. Science from across the world, other regions in the US, and right here in California suggests that we can take some of that flow for other uses, but must preserve adequate volume and natural patterns of variation if we want native species to survive. Whenever we decide to significantly deviate from those natural patterns, we are making trade-offs between human needs and ecological outcomes. In some cases, those trade-offs may be necessary to balance demands on existing water supplies. Without information about unimpaired flow, however, the nature of those trade-offs is unknown, and the results are much less likely to achieve the maximum benefit. It’s true that climate change is altering the unimpaired baseline in California, but base seasonality, river processes, and the needs of native species will not change. Climate change only makes the articulation of trade-offs more important and building in resilient water supplies for native species even more crucial, to protect our aquatic ecosystems.

In the world of river ecology and environmental flows, the concept of maintaining flows as a proportion of unimpaired has not been replaced by the creation of novel flows. Quite the opposite; decades of application of novel (or highly engineered) flows have demonstrated that they are ineffective at maintaining even the single species they are often designed around — much less supporting a thriving aquatic ecosystem. Novel flows may be necessary in heavily altered, novel ecosystems, in which unimpaired flows can no longer provide benefits to native species because humans have so greatly modified the landscape. Even in these systems, however, novel flows are most often effective for a given native species because they mimic a portion of the unimpaired hydrograph and/ or the effect of some portion of the unimpaired hydrograph on habitat conditions. As such, understanding the unimpaired hydrograph and the way species have adapted in response, also informs how best to structure a novel flow and to understand its potential to be effective. Even in California’s most heavily altered landscapes, rivers that are so changed that they require novel flows are the rare exception. In most rivers, environmental flows that provide the functions of a natural hydrograph are the best hope to allow native species to persist and thrive.

Note:  The views expressed in this commentary are the author’s views, and should not be attributed to Maven’s Notebook.