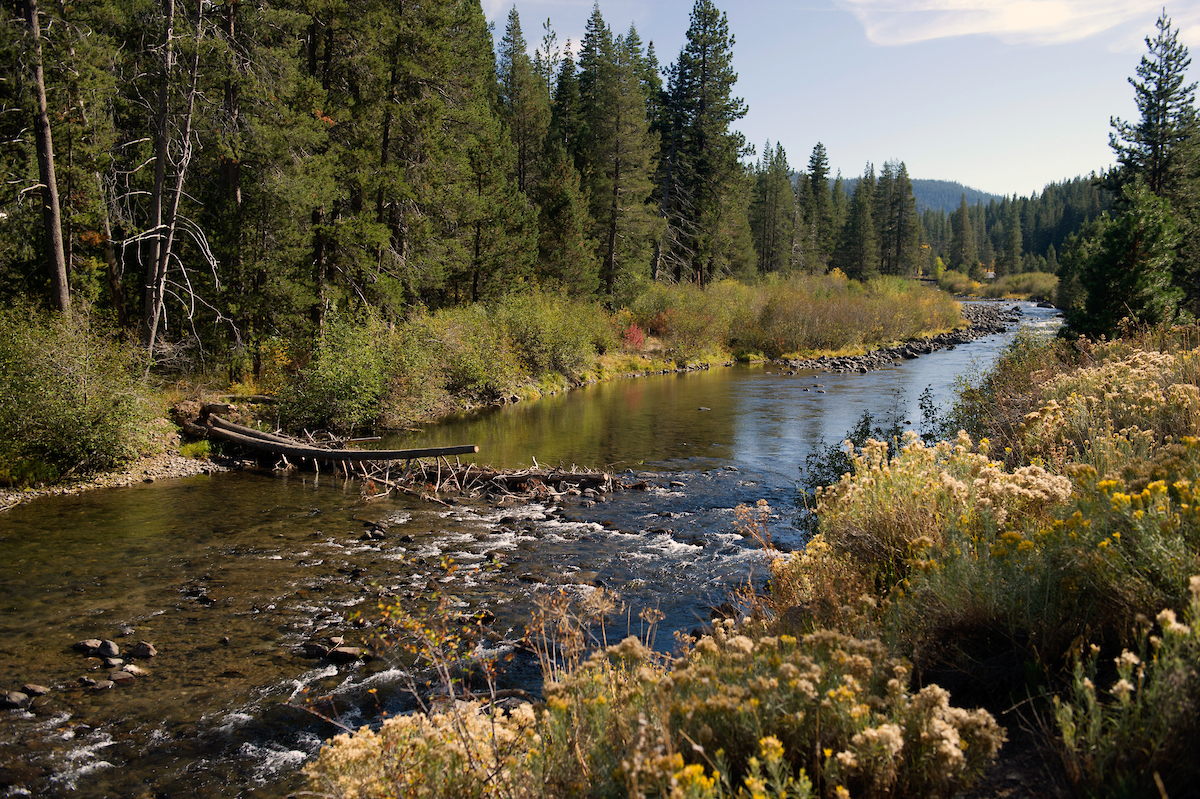 A view along the Truckee River between Interstate 80 and Olympic Valley, California. Photo by Steve Payer / DWR 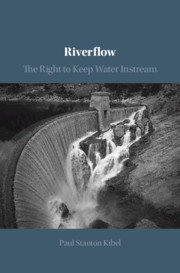 “Riverflow: The right to keep water instream” is the latest book authored by Paul Stanton Kibel, a professor at Golden Gate University School of Law and the Director of the Center on Environmental Law.  Riverflow examines the diverse and creative ways people are using the law to restore rivers, both here in California as well as internationally.  In Riverflow, Professor Kibel asserts that the legal tools already exist to preserve our waterways; the question is whether there is the political will to deploy them.

“Professor Kibel offers a way to use these tools, and to narrow the gap between science and policy – not necessarily to restore all waters to their original pristine shape at enormous cost to the communities and industries dependent upon the diversion of those waters, but in ways that share those waters more equitably between people and fish and wildlife,” writes Felicia Marcus in the book’s foreword.  “We rely on these waters for food, for our sense of connection to the earth, and for our shared sense of what it means to be human. That is perhaps one of the most interesting things about both the ancient and more recent sources of law detailed in Riverflow– whether old or new, these sources of law require us to use our human skills to balance competing uses, rather than demanding that we simply turn back the clock or defer to the status quo.”  Click here to read the foreword by Felicia Marcus.

Below, an excerpt from the book:

As we think about how to overcome this tendency for policy to remain disconnected from science in the water policy sector, one strategy is to consider whether it is fair or politically feasible that particular stakeholder’s bear the lion’s share of the economic loss associated with the policy changes that flow from the science.

We may need to remove certain dams or install improved fish passage on existing dams to restore declining salmon stocks, but does this necessarily mean that dam operators or those reliant on the hydropower and water from dams should shoulder all of the costs associated with this change? If we want to improve water efficiency and water conservation in the agricultural sector, should the public assist farmers with financial support to help upgrade irrigation systems rather than requiring farmers to bears all of these costs? If there are broader societal and environmental benefits resulting from these changes, then might it be appropriate for the public to share in absorbing some of these costs and in helping those stakeholders acutely reliant on the status quo to transition to a new paradigm? By reducing the acute and severe ways certain stakeholders are likely to be economically impacted by acknowledging good science, we might lessen their resistance to such good science. Therefore, it is not simply a question of fairness; it is a question of what may be politically feasible.

Consider the recent experience with dam removal efforts on the Klamath River, which flows through Southern Oregon and Northern California. There are four dams on the Klamath River – Iron Gate Dam, Copco 1 Dam, Copco 2 Dam, and J.C. Boyle Dam – that were constructed in the early 1900s without any passage for salmon. The removal of these four dams would open up hundreds of miles of prime spawning habitat for salmon, habitat at cooler higher elevations that may enable salmon to better adapt to climate change. In the context of the relicensing proceedings before the Federal Energy Regulatory Commission (FERC), tribal and conservation groups initially proposed that the agency order the dam’s owner, Pacific Corporation, to decommission and remove the dams, with this decommissioning and removal to be paid for entirely by the Pacific Corporation.

The 2010 settlement that ultimately emerged, however, provided for cost-sharing by the dam operator, federal government, state governments, and the ratepayers for the electricity provided by the dams. The total estimated costs for removal of the four dams came to around $400 million. Pacific Corporation agreed to provide approximately $200 million toward the removal and decommissioning costs, but this was a cap, with California (through funds made available through a state water bond) agreeing to cover excess costs. Under the settlement, the states of California and Oregon also allowed Pacific Corporation to seek adjustments in electrical utility rates, to recoup some of the costs of removal and decommissioning from ratepayers. With this cost-sharing framework in place, Pacific Corporation agreed to voluntarily surrender its FERC license and abandon efforts to relicense its four Klamath River dams.

Although most conservation groups and tribes were pleased with the end result of the settlement, the four dams on the Klamath River were coming down, the cost-sharing elements of the settlement were controversial. Some groups believed that it was inappropriate to allow Pacific Corporation’s shareholders to shift much of the costs associated with the dam removal to taxpayers and utility ratepayers.

Yet, if all of the costs of removal had fallen on Pacific Corporation’s shareholders, it is uncertain whether the company would have voluntarily agreed to removal, and the company might have pressed for FERC to relicense its Klamath River dams. The controversial cost-sharing elements are what lessened Pacific Corporation’s opposition to dam removal, and made it possible for the company to justify the decision to abandon FERC relicensing to its shareholders. It is also true that there was a broad and diverse constituency that might benefit from removal of the dams, including commercial and sport fisherman and including tribes that were culturally and economically dependent on salmon. Under these circumstances, there is a credible argument that cost-sharing was not only the most feasible option for dam removal but perhaps a relatively fair option as well.

Does the Klamath River dam removal cost-sharing model work in all situations? No, it does not. But what this cost-sharing model suggests is that, when it comes to steps needed to improve how we manage water resources to improve instream flow, sometimes there may be a more feasible middle course between (on the one extreme) insisting that the current beneficiaries of the status quo pay for all the costs to achieve this objective and (on the other extreme) shielding current beneficiaries of the status quo from any of these costs to achieve this objective. The cost-sharing approach, in some but not all situations, can help shift the conversation from whether to make the changes to better align policy with science to what is an equitable and feasible way to pay for making these changes.”

For more information, see below.