Hey, are you ready for a good water news story?

In 2007, Mexico and the United States agreed to establish a formal process managed by the International Boundary Waters Commission to discuss issues of mutual concern to both nations related to the Colorado River.  This has resulted in increased cooperation between the two countries and ultimately led to an agreement that Mexico can store water in Lake Mead as well as how Mexico would share in shortages of Colorado River supplies.

At the September meeting of Metropolitan’s Water Planning and Stewardship Committee, Laura Lamdin, an associate engineer in water resource management, gave a presentation on how the United States and Mexico built a collaborative relationship, the many accomplishments that have come as a result, and a look at the work currently in progress.

A brief history of the treaty and the minutes

In 1944, the United States and Mexico signed a treaty regarding the Colorado, Tijuana, and Rio Grande Rivers.  That treaty has been amended over the years and those amendments are called minutes.

In the early 2000s, the US and Mexico did not have a working collaborative relationship to address emerging issues on the Colorado River such as the surplus and sharing agreements that were developed with the seven Colorado River basin states.  However, both countries recognized this needed to change, and so they signed Minute 317 in 2010 as a commitment to build a better relationship.

Minute 317 established workgroups that explored opportunities for cooperation on a variety of topics.  However, initial progress was slow.

Soon after Minute 317 was signed, a significant earthquake rocked the Mexicali Valley and the resulting damage left Mexico in a bind.  As a show of good faith, the US and Mexico signed Minute 318 which gave Mexico essentially free storage in Lake Mead and created the beginning of a foundation of trust and progress.  Afterward, the Minute 317 workgroups developed much more rapidly.

In 2012, Minute 319 was signed which implemented a number of collaborative river management actions. Minute 323 continued and expanded upon Minute 319.  These minutes provide for Mexico sharing in both surpluses and shortages, and Minute 323 added provisions for a binational water scarcity contingency plan which is Mexico’s version of the DCP.  This became effective at the same time as the Drought Contingency Plan was finalized, and under this agreement, Mexico will also be making contributions to Lake Mead on a similar schedule as US agencies.  The minutes further provided Mexico with the ability to store conserved water and emergency supplies in Lake Mead.

Both minutes provide US funding for water conservation in Mexico for the benefit of both countries, as well as established several workgroups to continue pursuing ongoing areas of interest between the two countries, including the projects and environmental workgroups.

The project workgroup explores new water sources and implements conservation projects in Mexico.  Under Minute 319, the US and the local funding agencies contributed $21 million for conservation in Mexico in exchange for a portion of the conserved water.  The distribution is shown in the pie chart on the lower left.  The US contributed $11 million while each of the local funding agencies contributed $2.5 million.  In exchange, each local funding agency received 23,750 acre-feet of binational ICS, while the US’s portion of the water was put toward environmental purposes and system water. The overall cost was $105 an acre-foot.

The Minute 319 funds paid for a mix of system and on-farm improvements.  System improvements included canal lining, lining transmission pipelines, and the installation of automated gates and telemetry.  While there were some on-farm improvements as well, the vast majority of projects were related to improving the canal infrastructure that will provide lasting benefits to Mexico, Ms. Lamdin said, noting that overall, Minute 319 funds paid for improvements for approximately 120 miles of canals that were spread across 30 to 40 different projects across the Mexicali Valley.

Under Minute 323, the US and Metropolitan are continuing to fund conservation projects in Mexico in exchange for conserved water.  This time, a total of $31.5 million will be made available to Mexico which includes $16.5 million from the federal government and $3.75 million from each of the four local funding agencies.  The increase is due to a combination of inflation, reduction in ‘low hanging fruit’, and an increase in the amount of water that will be continued to be conserved through the continued work on identifying projects.  The four local funding agency contributions are split into three equal payments in 2020, 2023, and 2026.

As in Minute 319, these funds will pay for conservation projects in specific categories that are developed through the projects workgroup.  “The intent is for Minute 323 to fall more on the canal lining and system operational improvement side with projects that once again will generate lasting conservation for Mexico,” she said.  “One of the lessons learned from this Minute 319 is that a lot small projects can be burdensome from an administrative perspective, and so the projects workgroup hopes to develop fewer but bigger scale projects to ease administrative issues.  The projects workgroup is also still touring larger projects and new water sources.  The workgroup is developing a report that will evaluate various options, including desal and reuse projects, that could benefit both countries.”

“The accomplishment of the Minute 319 environmental workgroup with the pulse flow, which released 105,000 acre-feet from Morelos Dam and achieved the same goal of connecting the river to the Sea of Cortez, even if only for a brief window in time,” Ms. Lamdin said.  “Prior to the pulse flow, the river bed was quite dry.  Many stretches had not seen water for years or even decades, so the pulse flow often arrived as more of a trickle and less of a flood, but the water did arrive.”

While no second pulse flow is planned, Minute 323 provides for ongoing water for the environment.  The environmental workgroup is focused on managing and applying the water for maximum benefits.

“One of the lessons learned during the pulse flow was that much of the water soaked into the ground before reaching the main habitat creation zone,” said Ms. Lamdin.  “To remedy this situation, the workgroup plans to deliver water through irrigation canals, thereby bypassing certain areas of the dried river bed.  With these improvements, the workgroup hopes to grow and maintain the habitat created under Minute 319.”

Minute 323 provides multiple benefits to both countries, Ms. Lamdin said.  It provides for binational cooperation for a shared resource, it increases the elevation of lakes Mead and Powell, which helps delay or avoid lower basin shortages and DCP contributions, and it creates conserved water shared by both countries, and generates water for habitat created with the Minute 319 pulse flow.

“Overall, the various workgroups and the river operational structure built by these minutes is working and working well,” she said.  “However, Minute 323 is expiring at the same time as the 2007 interim guidelines and the 2019 Drought Contingency Plans, and so Mexico will be participating in the upcoming negotiations for setting new reservoir operating criteria and will be part of the solution as we try and make the Colorado River more sustainable.”

And now for the not-so-good news …

Yeah, I couldn’t let you get away without throwing some chill on those warm fuzzy feelings.

Satellite photo of the Salton Sea, the Imperial Valley, the Mexicali Valley, down to the Sea of Cortez

Bill Hasencamp, manager of Colorado River resources, said that this is the year that the climate scientists warned us about.  “Climate scientists have been telling us that the Colorado River basin is ground zero for the heat associated with climate change, and in fact, 122 years of data, this is the hottest summer ever on record for the four corner states of Colorado, Utah, New Mexico, and Arizona,” he said.  “To demonstrate how hot it has been, Phoenix in an average year has 19 days of 110 degrees or more; the record was 2011 when they had 33 days of over 110.  This year so far, 53 days in Phoenix have been 110 or higher, so smashing all heat records in Phoenix and the entire Colorado River basin.”

“The scientists also said accompanying the heat will be dryness, and in fact, this is also the driest summer ever for the four corners region,” he continued.  “So when you have very hot temperatures and very dry weather, it does bad things to the water supply.  We saw that last year with a healthy snowpack that only provided 50% of average runoff.  But beyond that, when it’s this hot and dry, the soils would be so dry that next year will be impacted also, even with a good snowpack, a lot of it will be lost to replenish the dry soils.  So, not a good omen on the Colorado River basin this summer.”

“The one silver lining is that even though it’s been hot and dry, demands are again down this year, and the lower basin demands are down by 650,000 acre-feet, so the incentives in the drought plan have been helping to reduce demands that have really saved the Colorado River from where it otherwise would be under these terrible conditions,” he concluded.

In other bits of news, Mr. Hasencamp noted the Lake Powell draft EIS came out recently, and the other basin states are concerned that the NEPA process isn’t the best place to address the issues that arise from a project of this magnitude, so the seven states have been meeting to try to urge Utah to delay the EIS process until the operational and legal concerns of the other states could be addressed.  Those talks were not fruitful so the six basin states sent a letter to Secretary Bernhardt, requesting him to not issue a record of decision or a final EIS unless and until those operational and legal questions have been resolved.  So far, there’s been no word out of the Interior as a response yet, he said.

It was also noted that, due to the pandemic, there will be no Colorado River users meeting this year. 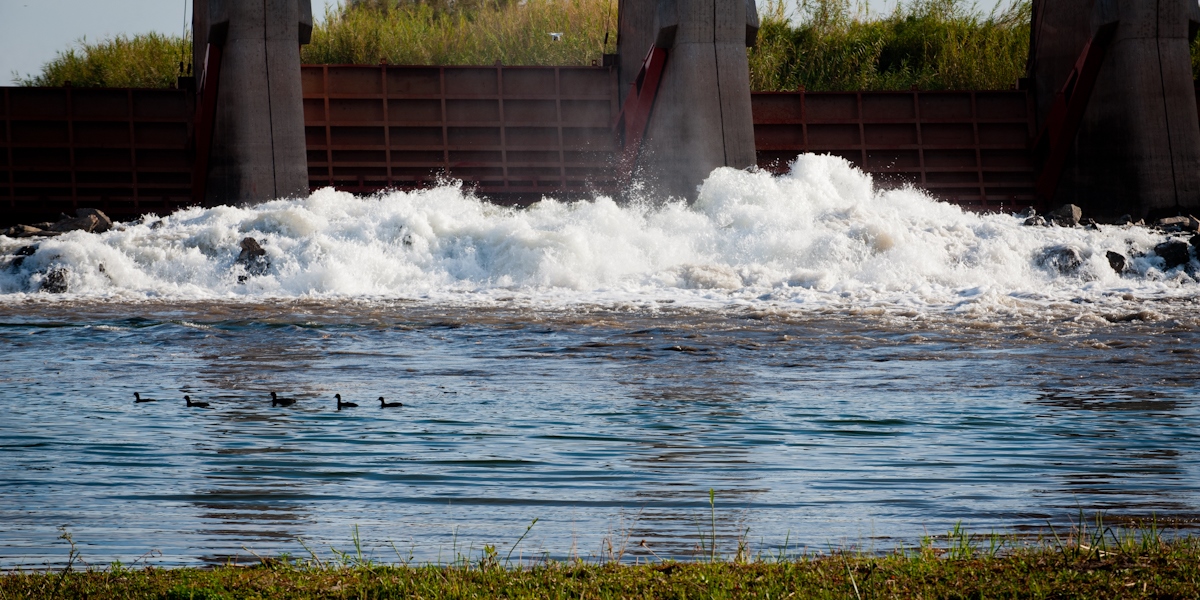