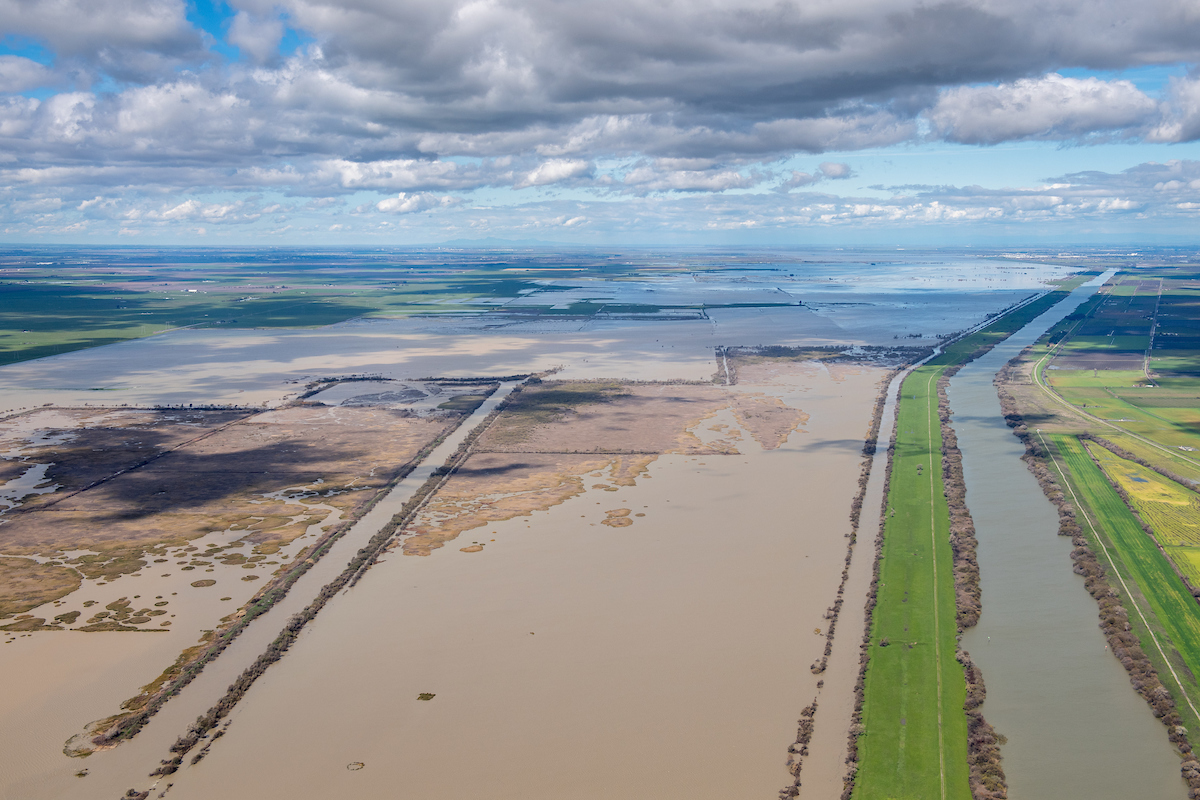 At the January meeting of Metropolitan’s Bay Delta Committee, Program Manager Randall Neudeck updated the committee on some of the projects and activities happening underway the Yolo Bypass.

OVERVIEW OF THE YOLO BYPASS

The Department of Water Resources has an easement to flood that area, so there is a set of weirs throughout the system.  Mr. Neudeck explained that weirs are just engineered low points on levees so that during the high flow periods, water will go over the weirs and into the bypass rather than flowing uncontrolled into urban areas downstream.

“During high flows, water will overtop the weirs and water will come down and start filling up the bypass,” he said.  “In 2017, over 400,000 cfs went down that bypass because the river can only hold 100,000 cfs, so altogether that would have been 500,000 cfs – almost a million acre-feet a day flowing through the Delta for a two week period.”

In the Delta today, there are two large rivers flowing in, the Sacramento River from the north and the San Joaquin River from the south; both of those rivers have been widened and deepened for ship traffic and there’s a deepwater port in Sacramento and in Stockton.  The green patchwork is agricultural land throughout the area, not only in the Delta, but up through the Yolo Bypass/Cache Slough area.  All those channels have been rip-rapped and aligned as well.

Historically, there were numerous smaller channels that were thinner and shallower, not only throughout the Delta area but throughout the Yolo Bypass.  This provided better access to the food production for the fish, it allowed better access to habitat, and it allowed for water in the summertime that would raise up in these marsh areas, cool it down and keep the temperatures lower in the water during the hot summer months, he said.

The key landscape changes that have occurred have had effects on the habitat for fisheries; the Delta used to have almost 500,000 acres of tidal marsh habitat, but today, a little more than 10,000 acres remains.

The landscape changes have also affected the production of phytoplankton and zooplankton (basically, fish food), making the San Francisco Estuary rank low in terms of primary production as compared to other estuaries.

“If you look at this green highlighted area going through, you can see that those islands are well situated on a habitat corridor or habitat connectivity where adult salmon can move up through the system to spawning grounds and juvenile salmon can move down the system and go out to the ocean,” he said.

The California Eco Restore program was initiated in 2015 with the goal of restoring upwards of 30,000 acres of habitat in the system.  25,000 acres of habitat improvements is being funded mostly by the State Water Contractors who are required to restore habitat under existing mandates under the NMFS biological opinions to operate the state and federal water projects.  There is another 5,000 acres that was approved through Prop 1 grants.  In the Yolo Bypass area, there are about six projects that have been completed over the last 5-6 years, one that’s still under construction and another six or so that are still in the permitting phase.

Mr. Neudeck then highlighted four projects: the Wallace Weir Project, two at the Fremont Weir, and a project to benefit the Delta smelt. The map on the above right shows the location of the first three projects.  The Sacramento River and the Feather River are coming down from the north next to the Sacramento Airport and the city of Woodland is on the left.  When those rivers get high, the water flows over the weirs and into the bypass.  In addition, there is the Colusa Basin drain which is canal that brings water down to adjacent agricultural fields.

The Colusa Basin Drain has a weir inside the canal; normally what happens is when the water backs up, they pond the water there and use it to feed the local agricultural fields.

What happens is fish such a sturgeon, salmon, and others will stray up there, and in many years, hundreds of fish would be stranded, and wildlife officials would have to go in by hand and pull them out  by hand.  So in 2017-2018, the Wallace Weir Fish Recovery project was built to capture those fish and transfer them back into the system.

Mr. Neudeck played a video in which Jacob Katz spoke of the project, saying “The retrofit of Wallace Weir is going to help fish.  The first way is it’s going to block adult fish that are moving up to their doom out in these canals, and instead we’re going to redirect them back to the river.  That’s huge.  These are the most important fish for reproduction.  They are ready, they are full of eggs, and they’ve made it four years out through the Delta, into the ocean, and back and now, they are taking a left when they should be taking a right and they are dying out in these fields.  This project will save them.”

The Wallace Weir project is now in operation and is being monitored to see if any further improvements are needed.

As shown in the slide on the upper right, when the water recedes, a lot of fish are stranded.  They have to find their way back to the Sacramento River.  The weir presents about a six foot wall which most fish cannot jump, so they have to find the existing fish notch – a 4×6 passage structure along a 2-mile concrete weir.  Department of Fish and Wildlife personnel would have to go in after each high water event and try to catch the stranded fish.

“In some cases, there are six or seven foot long sturgeons trying to wrangle them into nets and then bring them up over and walk them over to the river itself,” said Mr. Neudeck.  “You can imagine there’s a lot of mortality involved in this.”

The new facility was completed in 2019.  The facility is now in operaion.  He indicated there were some problems with undercutting during the initial operation, but they had addressed that and are continuing to monitor the facility.

This project is considering putting in an additional set of gates along the Sacramento River to put water into the Yolo Bypass to inundate some of the floodplains there.  Three locations were identified in the EIR; the eastern location was selected.

The main purpose this project is to take juvenile salmon off the Sacramento River, put them on to flooded fields in the bypass so they can grow larger before they head it out to the ocean.  It will also help in any additional stranding of adult fish coming up the system, he said.

Mr. Neudeck presented an animation of how it works.  When the Sacramento River rises to flood stage, they would open up the gate structure; eventually it would fill up the Yolo Bypass floodplain with water.  This would allow larger fish such as sturgeon and adult salmon to come up through the system and make their way up to the spawning grounds in the upper part of the Sacramento River and for the juvenile salmon to migrate down onto the bypass and use the benefits of the food and food production of the bypass to get bigger.

There have been several studies which have shown that a lot of fish food can be produced on the floodplains of the bypass, and this results in substantially bigger fish than those that stayed in the river.

Mr. Neudeck said they are also working with the Department of Water Resources, the Bureau of Reclamation, Reclamation District 108, and a number of other agencies on the Delta smelt resiliency strategy.  One of those actions is the North Delta flow action, which is an action to try to take some of the food being produced on the bypass and bring it down Colusa Basin drain to try to create a phytoplankton bloom and shunt that out to the Sacramento River and into the Suisun Bay to provide food to help the Delta smelt.

“The concept is good, trying to produce additional food for fish, but the scientists are still analyzing to see, does this water coming down actually produce the desired effects,” he said, noting that most of the funding for this project came from the Department of Water Resources and the Bureau of Reclamation.

Mr. Neudeck closed with a listing of the projects that Metropolitan is funding in the Yolo Bypass.  Some of those include looking at seasonal rearing habitat on the floodplain as well as evaluating salmon food production and other elements.

“The goal of this is as we build some of these projects, they cost a lot of money and we want to be sure we use this research that’s being done to effectively operate the project, to effectively put the right amount of flows on it to produce the right amount of food for the fish – not too much flows … the level of flows will depend on how much density of the food on the bypass and the location as well.”

Click here for the full agenda, meeting materials and webcast for the January meeting of Metropolitan’s Special Committee on the Bay-Delta.