On Friday, the Bureau of Reclamation announced the water allocation for the Central Valley Project, delivering the news that those north of the Delta would be receiving full supplies, but south of Delta farms would recieve just 5%.  Here are the reactions:

“Today’s paltry allocation announcement is nothing short of absurd,” said BBID General Manager Rick Gilmore. “It is the result of rigid and ultimately ineffective environmental regulations that prioritize fish while punishing the people provide food for California and the rest of the country.”

Growers and ranchers in BBID’s 6000-acre, CVP service area in San Joaquin County have already struggled to endure three straight years of zero-percent supply from the CVP, forced into purchasing supplemental water at skyrocketing, unsustainable rates for the very survival of their multi-generational family farms. An El Nino winter brought desperately-needed precipitation and rekindled hope of an improved allocation this year.

“While a 5% allocation is better than nothing, it will ultimately do little to avert the disaster facing our farmers whose livelihoods are being threatened, not only by the drought, but by failed regulations and crippling mismanagement,” Gilmore added. “Holding water back from our communities has provided no measurable benefit to the fisheries.”

“At some point, logic and reason must rule the day,” Gilmore said. “We understand the need to carefully evaluate our water supply given the drought, but hoarding water for fish while sacrificing our crops and our farmers flies in the face of good governance and common sense. The future of our communities is at stake.”

From the California Farm Bureau Federation:

Continued, severe water restrictions for Central Valley farmers show the chronic inadequacy of California’s water system, according to the leader of the California Farm Bureau Federation. The federal Central Valley Project announced today it would be able to supply only 5 percent of contract supplies to many of its agricultural customers.

California Farm Bureau President Paul Wenger referred to concerns expressed by many water managers during the winter about the amount of water released from reservoirs during storms.

“We’ll never know how much water might have been available this summer, if we had captured more of the water that flowed to sea at the height of the El Niño storm surges,” Wenger said. “That lost opportunity will haunt rural California throughout the summer.”

Wenger noted that farmers continue to squeeze more crop production from every gallon of water, but that the same efficiency standards aren’t required for water dedicated to fishery uses.

“One thing is clear: What’s happening now isn’t working for fish and it isn’t working for people,” he said. “We haven’t been able to operate our existing system to take best advantage of storms when they arrive, which leaves us even more vulnerable to the next dry year. Farm Bureau will continue to press for improved flexibility in both our water system and the regulations that govern it.”

The California Farm Bureau Federation works to protect family farms and ranches on behalf of more than 53,000 members statewide and as part of a nationwide network of more than 6.2 million Farm Bureau members.

Today’s announcement of a 5 percent allocation for Central Valley Project water users south of the Delta is another blow to farmers, rural communities and consumers who buy California farm products.

If last year is any indication a number of specialty crops grown on the San Joaquin Valley’s Westside will once again be on the chopping block. In 2015 Westside acreage planted to tomatoes and garlic fell 9 percent and 17 percent, respectively. The combined spring and fall season lettuce acreage was hit even harder with a 53 percent decrease because of water shortages. This year’s dismal water allocation, despite near normal rain and snowfall, is an indication of how inefficiently the federal fishery agencies are managing segments of California’s water system.

“If federal water allocations continue at these disastrous levels, more of the food that consumers 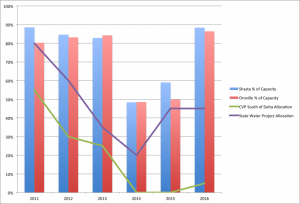 buy will be grown on foreign soil that does not have the food safety and security requirements of California-grown food,” said Mike Wade, executive director of the California Farm Water Coalition.

Eastside farmers in the Central Valley Project’s Friant system are receiving just 30 percent of their water this year. A portion of the Friant supply is being used to fulfill other contract obligations that the federal government is unable to meet because of restrictive water management decisions. In the last two years an estimated 25,000 acres of mature citrus trees, or almost 10 percent of the state’s production area, were removed in response to water shortages. California produces 85 percent of the nation’s fresh citrus.

Federal fishery agencies are restricting water deliveries to large swaths of California farmland and urban communities under the guise of protecting threatened and endangered Delta smelt and Chinook salmon. Despite 20 years of the same kind of pumping restrictions, fish populations are continuing to decline and the agencies have been unable to point to any hard science that justifies those decisions.

Above normal winter rains in Northern California have helped fill the state’s largest reservoirs, Lake Shasta and Lake Oroville, to above 85 percent of capacity and over 100 percent of year-to-date average. Urban communities are now making decisions to relax watering restrictions that were put in place during the drought.

In contrast to today’s disappointing federal announcement, California’s State Water project is expected to deliver 45 percent of requested water allocations. The much lower federal allocation flies in the face of the fact that the federal project’s Lake Shasta currently holds 31 percent more water, or a million acre-feet more than the State project’s Lake Oroville.

“We are furious with today’s allocation announcement. At a time when water supplies have returned to normal and the major reservoirs are in flood control operations, the federal fishery agencies continue to hoard water instead of using a balanced approach that includes water for productive California farms and businesses and many of its people.

“Mother nature has given us all the water we need. There is no question that failed regulations imposed on Reclamation are not achieving their intended goals as the extreme limitations on moving water to farms and cities has had no measurable benefit to the fisheries. President Roosevelt started building this great water project 80 years ago. The mismanagement of it over the last 20 years has crippled its ability to serve thousands of California farms, people in urban areas, as well as our rural economy.

“We forecast fishery controls will cause 1.5 million acre feet of water to flow to the ocean and deprive farms and cities the ability to put it to productive and beneficial use.

“We prayed for rain and Mother Nature blessed us. We begged for a water supply and instead are handed a pittance that is destroying farms, jobs and communities. The faith we once had in the government to intelligently manage our public water resources has also, sadly, been destroyed.”

The following statement was issued by Western Growers President and CEO Tom Nassif in response to the announcement by regulators of the Central Valley Project (CVP) that farms and cities south-of-the-Delta will receive only a five percent water allocation this year:

“For months before the El Niño rain and snow arrived, we and many others pleaded with the federal government to capture and store as much water as possible when massive storm runoff reached the Delta.  We have seen huge flows into, and out of, the Delta this year.  Today’s announcement of a measly five percent allocation to farms and cities in the San Joaquin Valley, contrasted with the State Water Project’s 45 percent allocation, provides dark confirmation that a policy of destruction of farmland is in place.  Already, well over 600,000 acre feet of water that could have been diverted to San Luis Reservoir has been lost to the ocean, and projections suggest that number will reach 1.5 million acre feet if common sense is not restored.  The drought has hit farmers, farmworkers and thousands of families hard, but now with the northern reservoirs filled and spilling water to make room for spring snowmelt, the federal government has very deliberately chosen to deny available relief to thousands of Californians in the San Joaquin Valley.  This action represents more than a failure of common sense.  A government that deliberately chokes off water for its people is a government that has lost its moral compass.”

From the Westlands Water District:

Despite above average runoff into the Sacramento-San Joaquin Rivers Delta and near average snowpack in the northern Sierra Nevada this year, farmers on the westside of the San Joaquin Valley, from Tracy to Kettleman City, will suffer from grossly inadequate water supplies from the Central Valley Project. Although the Bureau of Reclamation’s announcement that these farmers will receive a 5% allocation is certainly better than zero allocation they received in 2014 and 2015, today’s allocation announcement clearly illustrates the degree to which the once-lauded Central Valley Project is broken.

Since December 2015, more than 8 million acre-feet of water has flowed into the Delta, while pumping into key south-of-the Delta reservoirs has been severely limited by the 2008 biological opinion for the Delta smelt. Indeed, through January and February of 2016, the Central Valley Project Jones Pumping Plant diverted less water than in January and February of 2015, when extended drought conditions resulted in very little inflow into the Delta.

Notwithstanding Reclamation’s ability to make some water available to farmers, it is likely that we will experience another year when more than 200,000 acres of prime farm land in Westlands will be fallowed. This means not only increased costs and a loss of revenue for farmers, but a loss of tens-of-thousands of farm worker and farm related jobs. In other words, despite the significant improvement in rain and snow produced by the 2016 El Nino, economic hardship will continue to plague the people who live and work on the westside of the San Joaquin Valley.

We often hear that in order to make California’s water supply system work, we have to implement a “big gulp, little sip” strategy; to take advantage of periods of high flow so that additional water can be left in the Delta during dry periods. But if the first three months of 2016 were not a time when a “big gulp” could be taken, there will not exist such a time. Simply put, the rigidity imposed on operation of the Central Valley Project by the 2008 biological opinion for Delta smelt has failed our communities. But tragically, the current federal policy, which wasted more than 250 billion gallons of water into the ocean in January, February, and March, has failed to protect the species while simultaneously allowing the health of the Delta to rapidly decline.

As people, communities and agriculture try to survive this disaster, we should not forget that these decisions are affecting the consumer. Jobs and farmland will continue to be eliminated and the safest food supply grown in our nation will be compromised as local farming operations are outsourced to foreign soil.

The decisions made today will have lasting impacts on the viability, strength and resilience of our nation’s most abundant, safest source of food.

Is that the legacy we want for our future generations?