On February 12, 2013, agency officials held a press conference to announce that mandatory restrictions put in place to protect Delta smelt had reduced water deliveries from the Delta by 700,000 acre-feet since November 1, which they say is enough to supply 1.4 million homes for a year or irrigate more than 200,000 acres of farmland.

Perhaps most troubling is that even though we’re just four months into the water year, the pumps have already reached 75% of the incidental take limit for the entire water year, which is not slated to end until September 30.  Additional curtailments have been ordered, meaning less water will be delivered from the Delta and less water will be available for California farms and cities this year.  Agency officials used the news to push for the Bay-Delta Conservation Plan.

So what’s going on?

The Delta smelt, a species only found in the Delta, is widely considered to be an indicator of the overall health of the estuary.  The Delta smelt was first listed as threatened in 1993; the population experienced a steep decline in 2004 and has yet to show signs of recovery, demonstrating that existing regulatory mechanisms have not proven to be adequate to halt the decline of the species.  In recent years, the Delta smelt has become a key player in determining how much water can be exported from the Delta by the water projects each year.

The Central Valley Project and State Water Project are regulated to comply with federal and state endangered species laws through “biological opinions”, complex documents issued by federal regulatory agencies that mandate certain actions when necessary to protect the species.

From the final draft of the Delta Plan. Click on the picture to enlarge.

The operation of the pumps in the south Delta disrupts natural flow patterns, which is known to cause problems for the Delta smelt, as well as other migrating fish species.  In a normal flow pattern, water from Sacramento River flows into the Delta from the north and joins with the San Joaquin River from the south to flow westward into the San Francisco Bay; however, when the water project pumps in the south Delta are operating, instead of flowing westward, the currents in some channels tend to change direction, flowing south towards the pumps.  This can pull the smaller and weaker swimming fish such as the Delta smelt into the south Delta, drawing them into dead-end channels where predators lurk or into the pumps where they can become entrained.  The Delta smelt biological opinion restricts the pumping rates in order to reduce the negative or reversed flows in southern Delta channels when the species are present.

It is acknowledged that some of the species will perish as a result of normal project operations.  Section 9 of the Endangered Species Act as well as federal regulations prohibit the ‘take’ (read: kill, or mortally wound, if you prefer) of endangered and threatened species except when a biological opinion grants an incidental take permit.  Incidental take is defined as “take that is incidental to, and not the purpose of, the carrying out of an otherwise lawful activity” and is allowed if the reasonable and prudent alternative as specified in the biological opinion is followed.  The amount of incidental take allowed for Delta smelt is determined in part by the results of the Department of Fish and Game’s fall midwater trawl.  This year’s trawl found only 42 Delta smelt, making it “one of the lowest indices in fall midwater trawl history,” reports a DFG memo.  The take limit for the current water year (October 1 through September 30) was determined to be 305.

TAKING IT TO THE LIMIT 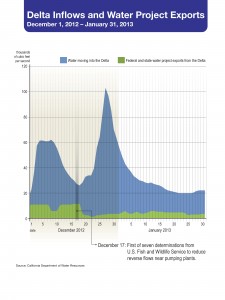 From the California Natural Resources Agency. Click to enlarge.

In early December, the likely combination of a high ‘pulse’ flow from the heavy precipitation along with the high pumping rates at the water project pumps pulled many Delta smelt into the south Delta.  After 90 smelt were salvaged at the pumps, the US Fish and Wildlife Service made the first determination on December 17 to restrict pumping operations in order to protect the species.  Despite the pumping reductions, the salvage of smelt at the pumps continued with Scientist Lauren Hastings reporting to the Delta Stewardship Council meeting on January 24th that the water projects were already at nearly half of the incidental take limit; to contrast, the water projects are usually at 30% of the take limit by the end of June.

By early February, the number of smelt salvaged at the pumps reached 232 of the 305 take limit, and the USFWS determined that further pumping reductions were required.  As long as Delta smelt remain in the area, the pumping restrictions will remain in place.

The effect on California’s water supply is still unclear; certainly less water is being delivered, but just how much less will depend on how long the pumping restrictions will continue.  Add to that a winter season that, after a wet start, is now looking to be rather dry, and we’re certainly assured to be arguing by summer whether it was more the Delta smelt restrictions or the lack of precipitation that was responsible for reduced water deliveries.

Officials used the news to push for the emerging Bay-Delta Conservation Plan, pointing out that a new diversion point in the north Delta would eliminate the reverse flow conditions in the south Delta, and contending that if the north Delta diversion had been in place, roughly 700,000 acre-feet of additional water could have been diverted while remaining in compliance with water quality standards and endangered species regulations.  Under development since 2006, the controversial Bay Delta Conservation Plan calls for the construction of new intake facilities in the Delta, and twin-tunnels to carry the water under the Delta to the existing facilities in the south Delta.  Drafts of the Plan’s documents are expected to be made available later this month.

“This winter provides a case study in why we must find a better way to balance needs in the Delta,” said Department of Water Resources Director Mark Cowin in a press release. “The current plumbing configuration in the Delta serves neither people nor fish and wildlife well. Climate change will only increase the stress and conflict. California needs a rational discussion of the options presented by the BDCP, because to do nothing invites disaster.”

“The current approach is untenable: It too often puts our native and imperiled fish species in the West Coast’s largest estuary too close to the south Delta pumps,” said California Department of Fish and Wildlife Director Charles Bonham. “State and federal fishery agencies will continue to cast a critical eye on BDCP’s specifics, but we are confident that in concept a new diversion point can reduce this conflict between a healthy estuary and water needs in our economy.”

In recent weeks, a smaller tunnel along with efforts to increase regional supplies has been proposed by a coalition of environmental groups and some water agencies, but whether that proposal will be given serious consideration remains to be seen.

Others are opposed to any tunnel, no matter what size.  “There is no solution to taking half the water out of the estuary,” Bill Jennings, head of the California Sportfishing Protection Alliance, told the Stockton Record.

NOTE:  Alex Breitler has a lot more information and quotes from the press conference in this blog post.