The California Water Commission hears an update on dam safety

With so many dams in California and the current dismal budget climate, perhaps you might have been concerned about the status of the state’s dam safety program?  Or maybe you hadn’t thought of it, but with over 1250 dams in California, it’s no doubt an important  issue.

Today’s Maven’s Minutes covers the presentation that David Gutierrez, DWR’s Chief of the Division of the Safety of Dams, gave to the California Water Commission on the status and update of the state’s dam safety program at the September 19th Commission meeting.  He talked about the strength of California’s program, the functions and roles of the Division, and some of the current projects underway, including one unique project to actually move a river. 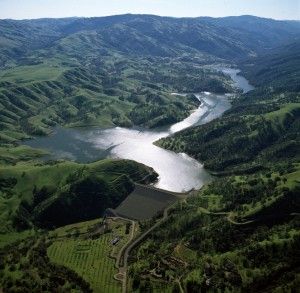 Mr. Gutierrez began by pointing out that dam safety is an important issue that ‘never sees the light of day’ unless something bad is happening.  Dam failures are important for two reasons:

The Division of the Safety of Dams has four main activities:

Earthquakes and dams:  Dam safety remains an evolving science.  In 1971, the Lower San Fernando Dam in Southern California held water that was 40 to 50 feet below the crest of the dam.  After the San Fernando earthquake, the dam slumped into the reservoir, leaving only 3 or 4 feet to the crest of the dam.  With 80,000 people downstream, it would have been by far the worst disaster in the U.S.  But since then, our knowledge about earthquakes has increased significantly: we know about liquefaction, we know where the faults are, we know how they rupture, and we know how they will affect dams.  Since that earthquake, California began a program to evaluate all dams in California.  A new paradigm is constantly evolving in terms of our understanding of how earthquakes affect dams, so we must continually go back and check dams.

Emergency response:  After an earthquake, within a minute, Mr. Gutierrez is notified on his cellphone as to which dams were affected and how, and inspectors are sent out quickly to evaluate the dams and evacuate people if necessary.

Mr. Gutierrez was questioned further on the San Clemente Dam removal project and the moving of the Carmel River:  Mr. Gutierrez explained that the topography of this area makes this situation very unique.  The river comes down to the dam, there’s a small knoll that we can take advantage of to move the river over for a few thousand feet and then return it to the channel.  It’s not a simple process; the river wasn’t there before, so how is it going to behave in that new channel?  Consultants have been working on those questions, and I think we have a good handle on them.  We haven’t started construction yet.  “I think it’s a unique project, a one of a kind.  I can’t think of any time where we’ve actually removed a dam of this height with the complexities that we’re dealing with from an environmental standpoint as well as an engineering standpoint.” (For more on the San Clemente Dam Project, click here.)

How common is sedimentation in California dams?  Sedimentation is more of an issue in the western part of California, Mr. Gutierrez said.  The rock there is beat up by the tectonics of the area; the rocks are sheered and much more erodible than in the Sierra.  The two dams with the biggest problems are San Clemente Dam and Matilija Dam in Southern California.  Sedimentation is a difficult and expensive issue to deal with, but it’s not a major issue:  “It’s hard to put a percentage on the number of dams with this problem, but it’s a low number, a couple of percent that have a significant problem like this.”

Question about the size of the dam and when it falls under the Division’s jurisdiction:  It depends upon  the height of the dam and the volume of the reservoir behind it.  If the dam is higher than 25 feet and if there is more than 50 acre-feet is in the reservoir, it will be under the Division’s jurisdiction.  There are a few other rules: if the reservoir is less than 15 acre-feet, it doesn’t matter how high it is, and if the dam is less than 6 feet tall, it doesn’t matter how much water is behind it.