California EcoRestore is an initiative started in 2015 under the Brown Administration with the ambitious goal of advancing at least 30,000 acres of critical habitat restoration in the Delta and Suisun Marsh by 2020.  The project includes a broad range of habitat restoration projects, including aquatic, sub-tidal, tidal, riparian, flood plain, and upland ecosystem.

At the August meeting of the Central Valley Flood Protection Board, Bill Harrell, gave an update on the Eco Restore program and the progress that has been made over the past five years.

Bill Harrell started with a map of the current projects, noting there are 32 projects shown on the map.  The projects are color-coded to help distinguish the main habitat features of each project such as tidal wetland, floodplain restoration, setback levee, fish passage, or subsidence reversal.

“So under construction right now in the Delta region there are over 7600 acres of habitat projects,” said Mr. Harrell, noting that many of these projects are multi-benefit projects with both flood benefits and habitat benefits.   “To date, we’ve completed over 3600 acres of tidal and non-tidal wetland production.” 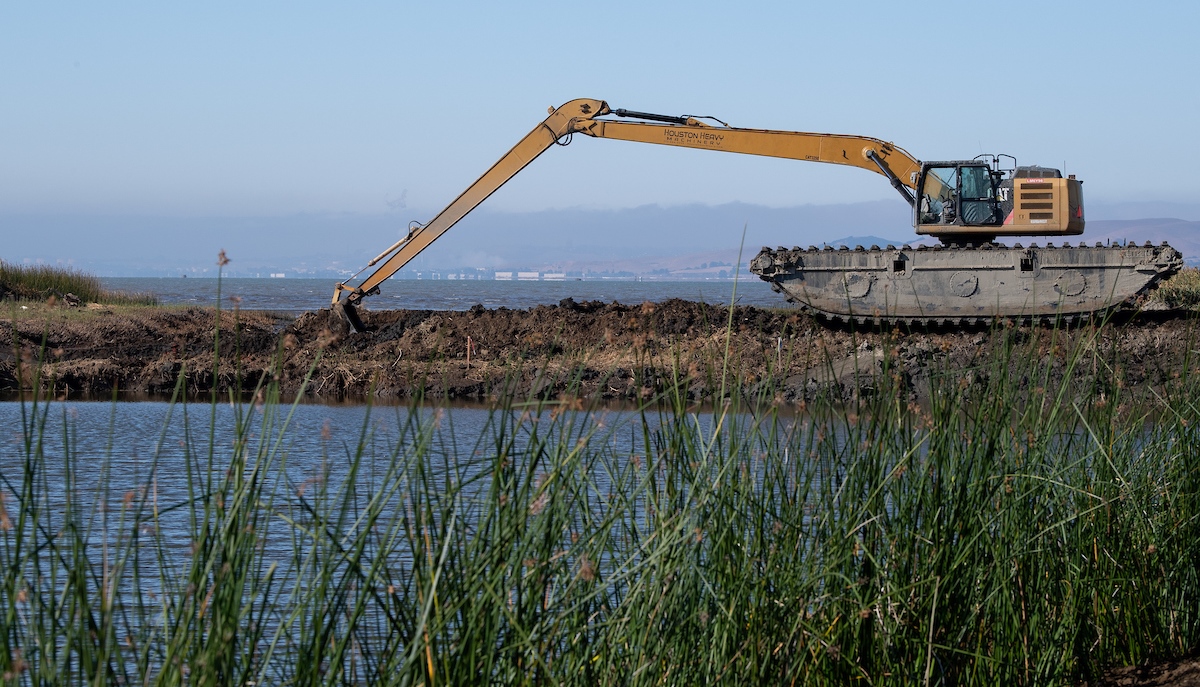 An excavator breaches a levee at the Tule Red Tidal Restoration Project breach ceremony in 2019.  9 months later, longfin smelt have been seen in abudant numbers.  Photo by Kelly Grow/DWR.

Progress over the first 5 years

This spring marked the 5th anniversary of the Eco Restore initiative which was established in 2015 to accelerate restoration on at least 30,000 acres of habitat across the Delta.  “After 5 years, we’ve made some impressive progress, I think, and collectively we are on track to accomplish the initial goal of Eco Restore,” said Mr. Harrell.  “However, there’s a lot of work to do, a lot of challenges to overcome.”

To mark the 5th anniversary, the state has released the Eco Restore highlights fact sheet.  “As this graphic depicts, Eco Restore is off to a great start and we will continue to rely on a lot of agency support and private partnerships as we move forward,” he said. 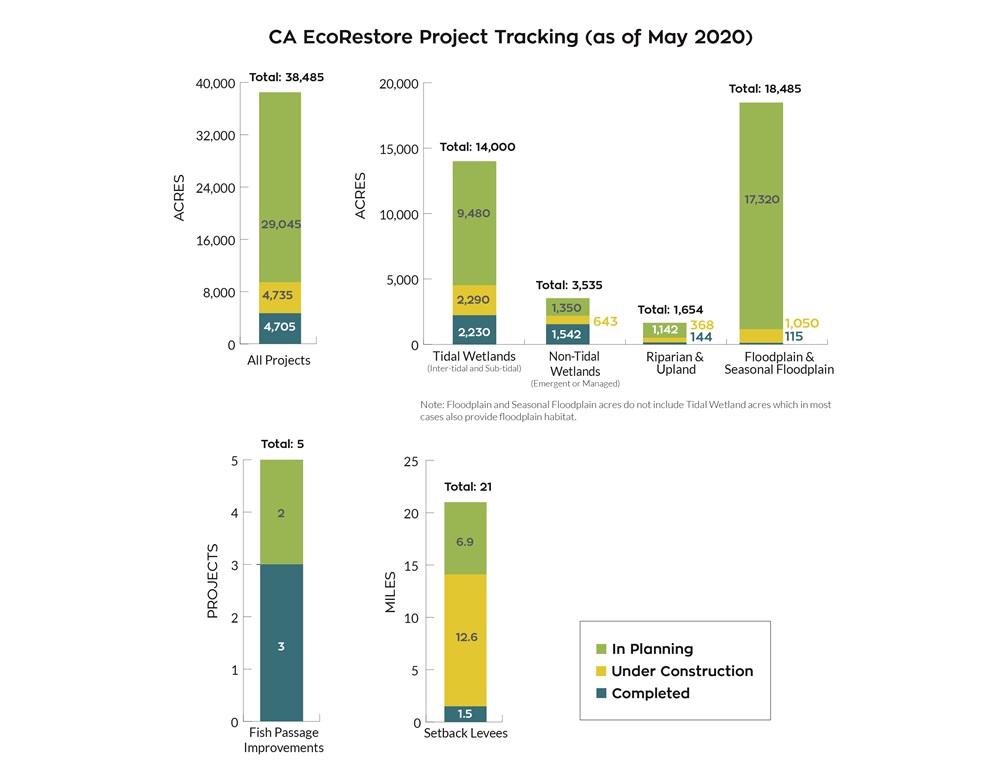 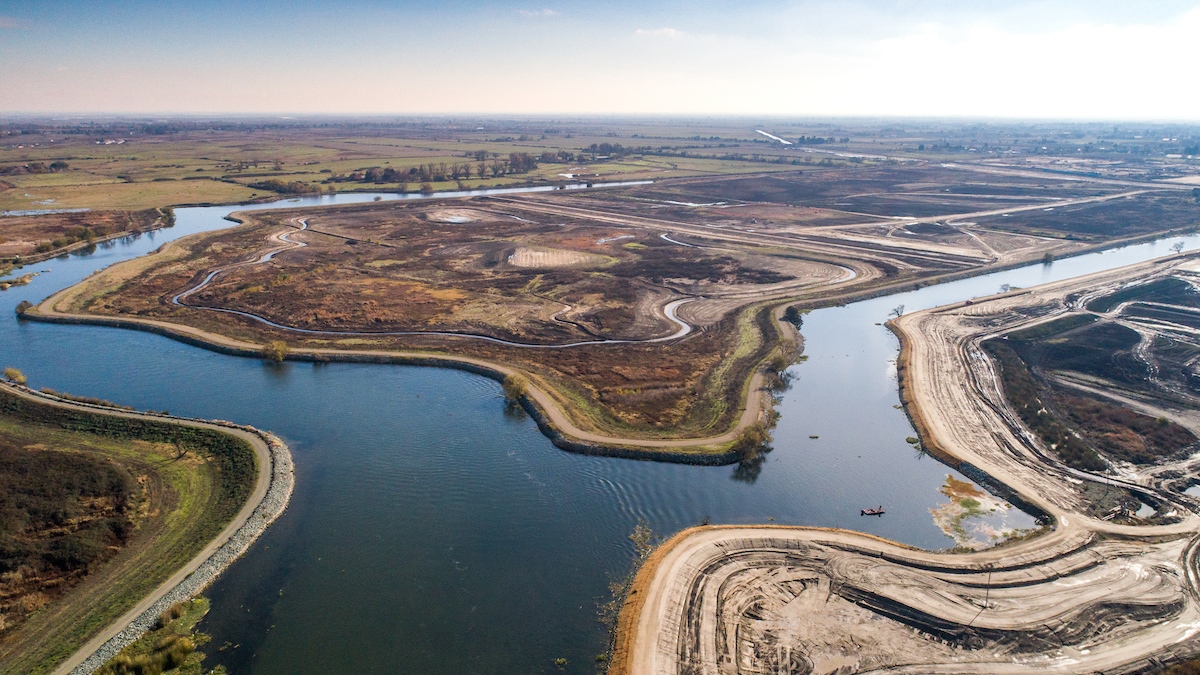 In February, a volunteer planting day was held at Dutch Slough in Contra Costa County which marked a major milestone for that project following 2 years of construction.  Now with the new vegetation in place, they are preparing to breach that site next year.

In May, they broke ground on the Whale’s Belly wetland project on Sherman Island in Sacramento County.  That site is a major step forward for a carbon sequestration project on state-owned land.

In June, they found the return of longfin smelt in abundant numbers to the Tule Red habitat restoration project in Solano County just six months post-construction.

They recently broke ground on the Lower Elkhorn Basin levee setback project in Yolo County which is a multi-benefit flood and habitat restoration project that aims to restore about 900 acres to floodplain habitat.

Also, the Lower Yolo Tidal Habitat project in Yolo County will restore 1600 acres adjacent to the recently completed Yolo Flyway Farms.  They are partnering with Westlands Water District project to develop the site, and then Westlands will hand it over to DWR for long-term O&M. 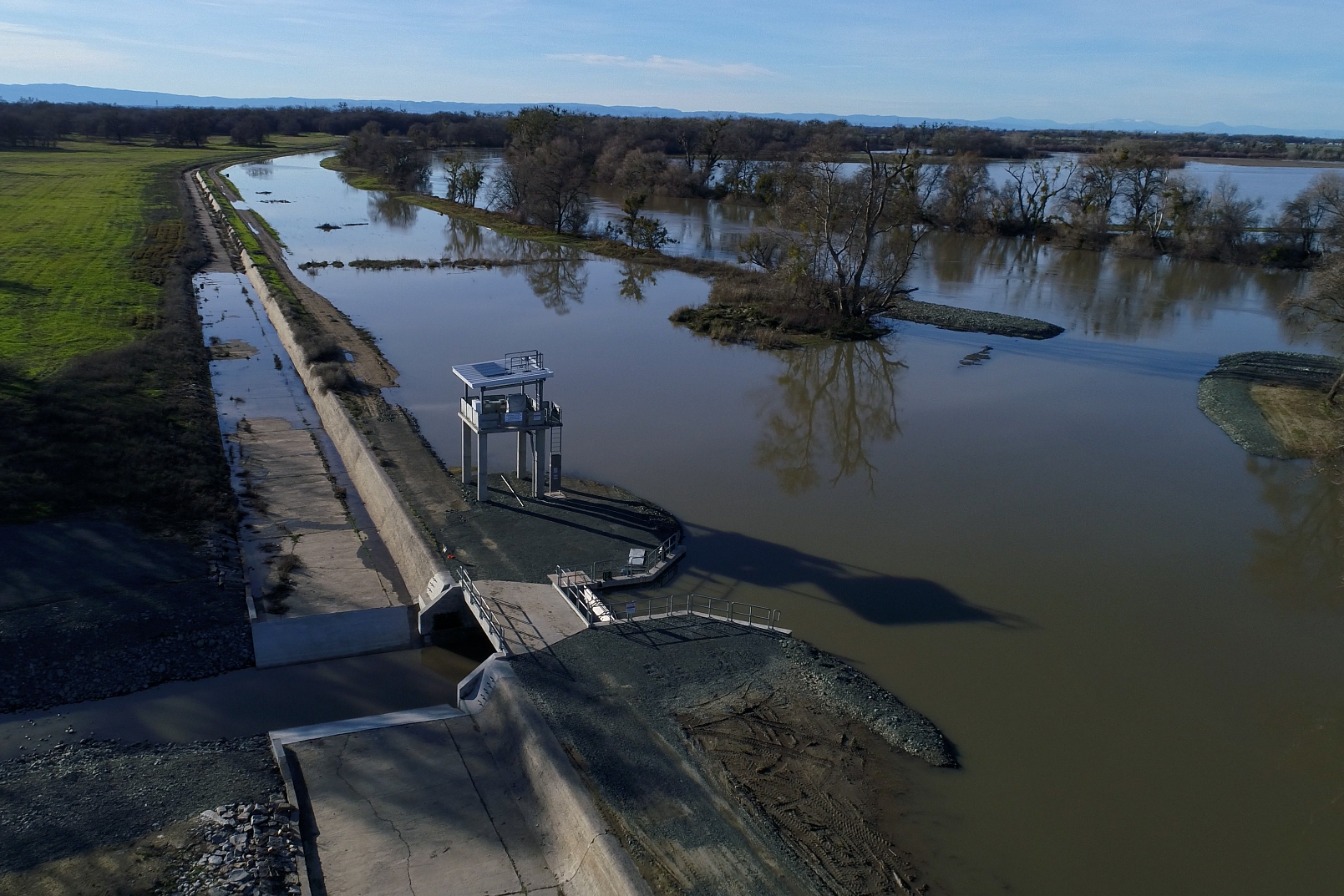 The Fremont Weir Adult Fish Passage Project which prevents adult fish from becoming stranded in the Yolo Bypass when waters recede, began operations in the winter of 2019. Photo by DWR.

And many more projects in the works …

The Yolo Bypass Salmonid Habitat Restoration and Fish Passage Project up at the Fremont Weir recently completed their EIR/EIS in late 2019 and they were issued their biological opinion.  They are a little over 35% design and currently in the permit acquisition process for the remaining state and federal permits.  Last year, DWR and partners completed the Yolo Bypass Adult Fish Passage Project that improved fish passage at the Fremont Weir for returning adults, a long-needed project to prevent stranding of adult fish in the Yolo Bypass when the waters recede.

DWR is working in conjunction with CDFW on the Prospect Island project to convert roughly 1,609 acres of flooded uncultivated land to fully tidal habitat.   The EIR has been certified the EIR, they have a settlement agreement with the folks on Ryer Island, and they are hoping to break ground next year.

The Lookout Slough project aims to restore the approximately 3,400-acre site to a tidal wetland, creating habitat and producing food for Delta Smelt and other listed fish species. In addition to the restoration of important tidal wetland habitat, the project will also provide flood protection by expanding flood conveyance and storage for the Yolo Bypass. The Lookout Slough project completed their draft EIR this year, hoping to have their final EIR in a matter of a couple of months, and final permitting at some point next year.

The Wings Landing project is a tidal restoration project in upper Suisun Marsh.  It is part of the Fish Restoration Program effort that will count towards the biological opinions and the Suisun Marsh Management Plan restoration targets.  The effort is being implemented by a private sector partner through a contract with the DWR and DWR will take on ownership of the parcel and long-term O&M.

The Bradmoor and Arnold projects are adjacent projects in the northeast Suisun Marsh that together, will be over 1000 acres of habitat that is scheduled to go to construction next year.  A unique part of the project is there is a large upland island associated with it.

Chipps Island is a 900 acre+ island right in the heart of Delta smelt habitat at the confluence of the Sacramento and San Joaquin Rivers.  It is mostly owned by DWR, and they are working on obtaining the last parcel.  The project is expected to go into planning and design next year.

Twitchell Island levee setback project is broken up into a series of phases with the highest priority sections of the levee to be restored first and set back.  They are ready to go on the next phase and are just waiting for the funding to get put in place.

The McCormick and Williamson Tract project completed Phase 1 this past year with the interior levee resloping and the construction of an interior ring levee around the Hearst Communications Tower.  Phase 2 will be in design and planning through 2021 with construction in 2022, and that will open that island up for flood control as well as tidal habitat.

There are 7 videos documenting the progress that are available at the DWR Eco Restore website or on DWR’s You Tube channel.  Mr. Harrell noted that four of the videos were featured as part of a film symposium at the National American History Society and Wildlife Society conference and were well received.