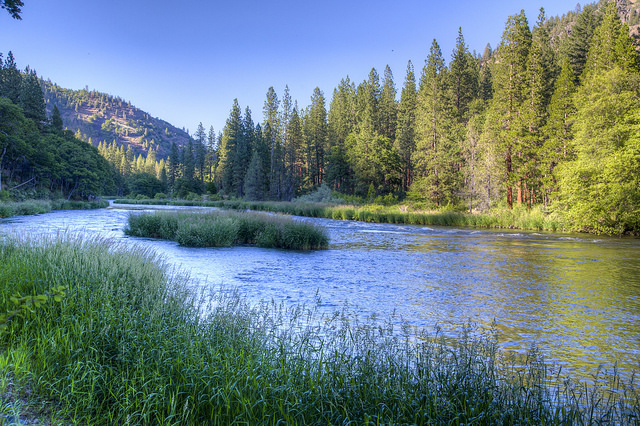 Klamath RIver; photo by the Bureau of Land Management

The State Water Board today issued key documents that move the Klamath River Renewal Corporation (KRRC) significantly closer to removing four dams and re-opening 360 miles of the Klamath River and its tributaries to imperiled salmon.

The board issued a Final Water Quality Certification permit and Final Environmental Impact Report. The permit conditions will become part of the broader Lower Klamath Project License Surrender Order that must be issued by the Federal Energy Regulatory  Commission (FERC) before the dams can be decommissioned and removed.

One of the largest dam-removal efforts in U.S. history, the project primarily consists of removing three dams in northern California (Copco No. 1, Copco No. 2, and Iron Gate) and one in southern Oregon (J.C. Boyle).

The State Water Board action comes after an extensive process that began with the KRRC’s application for a Water Quality Certification in 2016. The process involved numerous public meetings in the project area and resulted in adoption of an environmental impact report that considered and responded to more than 2,600 comments.

“Decades in the making, this historic and comprehensive project will help restore native fish populations, and improve water quality in the Klamath Basin,” said State Water Resources Control Board Chair E. Joaquin Esquivel. “The strategic removal of aging dams contributes to the restoration of our watersheds and reconnects our landscapes and ecosystems in critical ways.  This major restoration project that began in 2008 to remove the dams is now one step closer to becoming a reality.”

As analyzed in the State Water Board’s Environmental Impact Report, long-term water quality benefits of dam removal include a more-natural range of water temperatures, reduced fish disease, and elimination or reduction of the growth of the toxic blue-green algae that threatens the health of humans, animals, and fish.

The project incorporates portions of the 2010 Klamath Hydroelectric Settlement Agreement, a collaboration that includes the owner of the dams (PacifiCorp),tribes, federal, state and local agencies, nongovernmental organizations, and conservation and fishing groups.  PacifiCorp is asking FERC to transfer ownership to the nonprofit KRRC, which was formed in 2016 to carry out the dam-removal project.

The State Water Board supports efforts to improve the Klamath River watershed, but it is not a party to the Klamath Hydroelectric Settlement Agreement.  California’s Natural Resources Agency and Department of Fish and Wildlife signed the document as representatives of the state.

The Water Board’s regulatory role in this process as the state agency responsible for implementing the Clean Water Act is limited to protection of water quality.