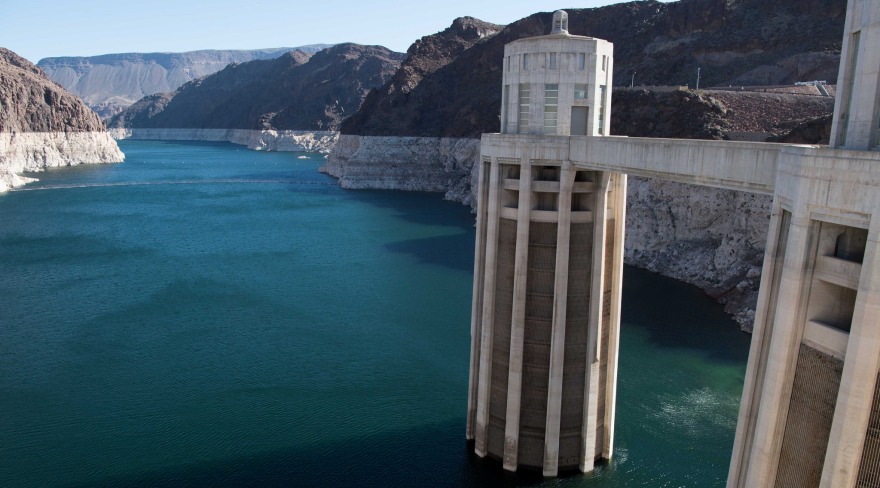 On Wednesday, the major headline in California water news was the impending agreement on a drought contingency plan for the Colorado River.  The details of the plan were discussed at Monday’s meeting of Metropolitan Water District’s Water Planning and Stewardship Committee.

Program Manager Shanti Rosset gave a presentation to the Committee on the risk of Lake Mead declining to critical elevations and the Drought Contingency Plan (DCP) that has been developed to reduce that risk.  Here’s a summary of that agenda item at the meeting.

As of the year 2000, Lake Mead was nearly full, but since 2000, the Colorado River basin has been in an historic 19-year drought.  During this time, Lake Mead has declined from being nearly full to its current capacity of only 42% full.  The Bureau of Reclamation has modeled future reservoir elevations on the Colorado River Basin on both the historic record from 1906 to 2015, as well as years 1988 through 2015 which is known as the stress test hydrology.

“Reclamation’s modeling from the last month shows that the likelihood of Lake Mead declining to elevation 1020 during the interim period is over 45% using the stress test hydrology,” Ms. Rosset said, noting that the consequences of dropping below elevation 1020’ include the difficulty for Reclamation to make water releases to both California and Arizona, a drop in hydropower generation at Hoover Dam, and Metropolitan and the others would be unable to access their Intentionally Created Surplus (ICS) storage.

In every year since the guidelines were adopted in 2007 except for one, releases from Lake Powell have been at and some times well above the minimum 8.23 MAF required under the long range operating criteria, but even with these releases, Lake Mead elevation has continued to decline, she pointed out.

“The Lower Basin could have been in shortage as early as 2016 if it hadn’t been for one very wet winter in the upper basin in 2011 and a combination of voluntary storage and conservation efforts taken by the lower basin during this period,” she said.  “In summary, the guideline have not been enough to keep Lake Mead elevations stable and above the shortage tiers.”

Given the situation, the seven basin states and the Department of Interior have been working together to develop approaches to keep both Lake Mead and Lake Powell above critical elevations through the interim period; this effort has resulted in a package of a number of interstate agreements:

The Lower Basin Drought Contingency Plan Agreement would be among the Secretary of the Department of the Interior, California, Arizona, and Nevada, and the contractors, which include Metropolitan.

“In this agreement, the parties agree to forebear claims to the delivery of any Drought Contingency Plan – Intentionally Created Surplus; the Secretary commits to create or conserve 100,000 acre-feet of Colorado system water annually, subject to funding availability and other considerations; and the agreement permits contractors within one or more lower division state to make DCP contributions on behalf of another lower division state,” said Ms. Rosset.

The Lower Basin operations plan establishes rules for delivery, borrowing, and repayment of the Drought Contingency Plan and Intentionally Created Surplus (ICS) capability.  The agreement also permit ICS delivery at lower Lake Mead elevations than were permitted under the previous guidelines, she noted.  The operations plan increases each state’s storage limit by 200,000 acre-feet and it permits interstate banking in Lake Mead down to elevation 1045’.

The upper basin’s Drought Contingency Plan is made up of two agreements: the Upper Basin Demand Management Storage Agreement and the Drought Response Operations Agreement.

“Implementation of the DCP would substantially reduce the risk of Lake Mead declining below 1020′,” said Ms. Rosset.  “It would provide additional certainty in Lake Mead operations through 2026, it would realize the benefit of the Mexican water scarcity plan, it would protect ability to continue hydropower generation, and it commits all seven basin states, water agencies, and the Secretary to work together in good faith through the interim period for the benefit of basin operations.”

Ms. Rosset said that the next steps are receiving feedback from the board and finalizing agreements within California and the Lower Basin; an action for the Metropolitan Board’s approval will likely be offered before the end of the year, and Congressional authorization for DCP may happen later this fall.

General Manager Jeff Kightlinger added that he hoped that an informational board letter with all the documents and agreements would be available by the November Board meeting, with Board action happening at the December meeting.  Even so, Metropolitan would likely be one of the last acting agencies on the agreements, he noted.

The Drought Contingency Plan has been in the works for a number of years now, and it looks like the states are getting close to agreement, although Mr. Kightlinger noted that things are still in flux within Arizona.   “There are a lot of intra-Arizona discussions taking place and it’s by no means certain that it will be finalized, but we have reached agreement with our other California counterparts on how we would be making contributions and moving forward, and that’s what we’ll be bringing forward to the board, and should Arizona reach its agreements, then all the seven states would be acting in this time frame,” he said.

“Eventually the hope is to bring this to Congress for potential action and ratification of this approach,” Mr. Kighlinger added.  “The reason for Congressional action is since we’re dealing with seven parties, interstate agreements as well as compacts, that it’s usually wise to get Congressional concurrence on course of action.”

The floor then was opened for questions by members of the committee.

Question: “I’m trying to understand the relationship between conservation and actual water in the lake and the whole basin,” said Director Abdo.  “It seems to me that the more we do conservation here, the better it is for the Colorado River basin.  Could you explain that a little bit so I understand it better?“

General Manager Jeff Kightlinger noted that Metropolitan has lowered its demands.  “You recall, just a few years ago, we would need almost 1.9 MAF to meet our demands and now we’re in the lower 1.7 range,” he said.  “That extra 200,000 acre-feet provides Metropolitan with some flexibility.  Last year, for instance, with that extra flexibility we had with lower demands and a high water year on the State Water Project, Metropolitan was able to store 400,000 AF in Lake Mead.  As long as we keep demands low in our service area, that provides us with flexibility both as how we use and implement our Colorado River supplies and our State project supplies, and we believe makes it possible to do programs like this, like this Drought Contingency Plan, so that’s one of the reasons.  It’s all related in how we manage our supplies back here.”

“So if I said to people that the more we conserve in our areas, all of our areas, the more water is available in a sense from the Colorado River to the places that need it, is that correct?“, asked Director Abdo.

Question: Director Hogan asked about the Secretary’s commitment to conserve 100,000 AF of Colorado system water annually.  “What does that mean?  What do we expect to happen?”, he asked.

Mr. Kightlinger noted that there are a number of programs that have been discussed on the Colorado River that don’t necessarily belong to any one state, but could create overall system efficiencies.  The classic one is Senator Wash, which is a holding reservoir that was built on the lower Colorado system but never really functioned well as it wasn’t correctly constructed, which was in part why the Brock Drop 2 Reservoir was built.  “There are some other opportunities on the river that the US could fund, so the Secretary will look within the Colorado River system for projects that would conserve 100,000 acre-feet that wouldn’t be assigned to any state but just create system efficiencies,” he said.

Director Hogan then asked about the impact on the Salton Sea.  What is the status of their participation and the Salton Sea issue?

Mr. Kightlinger said that they looked at three different metrics as to how much each entity within California should contribute.  “One is the seven basin states priority system that was agreed to in 1928, with Metropolitan being a junior priority with a priority 4 and 5; we also at the projected use and the percentages of projected use under the QSA, and then finally we looked at what programs were available to the entities and Metropolitan’s as well as agricultural entities without extreme environmental complications.  That’s how we ended up with IID contributing 250,000 acre-feet in 60% increments because they already have that 250,000 acre-feet conserved and it does not have Salton Sea impacts, it’s already covered.  Further programs could have environmental problems with the Salton Sea and so therefore they were capped at that amount.”

“Metropolitan is taking an impact here,” acknowledged Mr. Kightlinger.  “We’re going to show you some charts at the next meeting that shows some of the risks to Metropolitan as well as the other contributors and to Arizona.  If in a period of time when Metropolitan is making contributions and we’re very short on the State Water Project, that has the potential to have some issues for Metropolitan.  We’ve been discussing with the Southern Nevada Water Authority about the ability to potentially backstop Metropolitan in a given year if we get into a particular crunch with all our water supplies, such as a significant drought in California and on the Colorado, and Southern Nevada has agreed that they would step in and make a contribution with caps on it on behalf of Metropolitan, but only if we need it; we would then have to pay it back down the road, so that’s what those words mean.  We’re going to be finalizing those arrangements with Southern Nevada.  It’s been a very strong robust partnership that Metropolitan has with Southern Nevada, and this would be an example of that.”

Director Steiner notes that on slides 12 and 14 together, the percentages are different.

Mr. Kightlinger explained that on slide 14, it depends on what ends up happening.  “In some years, it may end up with only a half a million acre-feet contributed, in which case it’s less than that, the other is goes up in which case we’re contributing more as we cover for IID amount.”

“For example, on Palo Verde, it says that it’s coming from fallowing from us and that’s the 8%,” Director Steiner said.  “It sounds like whatever works in our fallowing program, we’re putting into the Drought Plan.”

“We would be making a higher call on Palo Verde, and they acknowledge we’ll be making a higher call within the program,” said Mr. Kightlinger.  “I think one of the points to be made here is that the water being stored in Lake Mead, the DCP contribution water, keeps Metropolitan’s name on it and can be withdrawn as the system recovers.  It’s not as if it’s just contributed and lost, it is stored in Metropolitan’s name, and that would include the water that is generated through IID, Coachella and Palo Verde.”