In preparation for the initial 2015 water supply allocation announcement in late February, the Bureau of Reclamation provided an update today on water supply conditions for the federal Central Valley Project (CVP). The water year in California runs from October 1 to September 30; the contract year for most CVP contractors runs from March 1 to February 28.

“While we were encouraged by storms in December, this very dry January illustrates just how precarious our water supplies can become,” said Mid-Pacific Regional Director David Murillo. “Since 2015 may be another critically dry water year, we are being extremely cautious as we develop initial operation plans and allocations for CVP water contractors. By building on what we learned last year, I am confident that we can maximize operational flexibility for the benefit of all water users.” 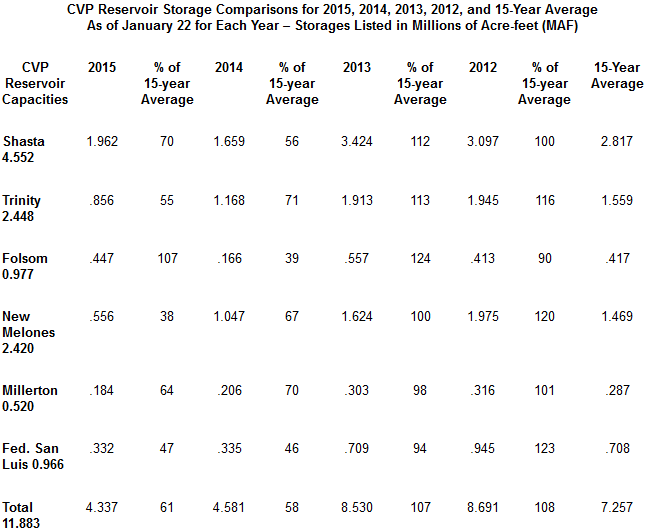 Water conditions in the Sacramento Valley have progressively become dryer since the very wet year of 2011going from Below Normal in WY 2012, Dry in WY 2013, Critically Dry in WY 2014, and Below Normal as of January 1, 2015. The California Department of Water Resources’ first snow survey for 2015, based on January 1 conditions, showed the statewide mountain snowpack water content to be about 57 percent of normal for the date, which is only 17 percent of the average April 1 measurement when the snowpack is normally at its peak before the spring melt. With the lack of snowfall in January, those numbers have fallen to 35 percent of average for the date and only 15 percent of the average April 1 measurement.

In December 2014, Reclamation, the U.S. Fish and Wildlife Service, the National Marine Fisheries Service, DWR, and the California Department of Fish and Wildlife released a working draft of the Interagency 2015 Drought Strategy, which outlines possible upcoming drought response actions and seeks to inform stakeholders and the public about the five agencies’ planning efforts for a possible fourth year of drought. The document is available at http://www.usbr.gov/mp/drought/index.html.

Last week, Reclamation and DWR also submitted a Drought Contingency Plan in coordination with FWS, NMFS and CDFW to the State Water Resources Control Board. The Plan outlines projected water operations and potential modifications to water quality rules and water rights permits that project operators may seek, depending on the developing hydrologic conditions. The document is available on the SWRCB website: http://www.waterboards.ca.gov/waterrights/water_issues/programs/drought/tucp.shtml.

The first official 2015 CVP water allocation announcement is planned for late February consistent with our contract terms. Water supply updates will then be made monthly or more often as appropriate and will be posted on Reclamation’s website at http://www.usbr.gov/mp/pa/water.

Reclamation balances the operation of the CVP and delivery of CVP water for agricultural, municipal and industrial, and environmental purposes based on factors that include hydrology, changing river and Delta conditions, storage in CVP reservoirs, regulatory requirements, court decisions, biological opinions, environmental considerations, operational limitations and input from other agencies and organizations.