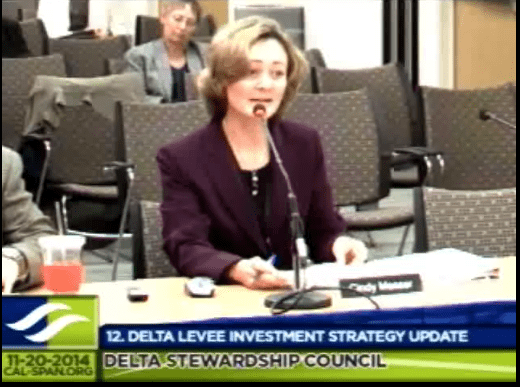 Topics in this month’s Delta Levee Investment Strategy update include the project schedule, upcoming issues for discussion, issue paper comments, and other activities.

Cindy Messer, Deputy Executive Officer of Planning, began by briefing council members on the schedule and pace for the project. She noted that the project is broken out into six phases; they are currently in phase 2. “The work we’ve done so far has been in the background, a lot of getting organized, getting information, figuring out our communication strategy and outreach plan,” she said. “So still heavy around the technical aspects, the information, and launching the outreach.”

Beginning in 2015, they will move into Phase 3, which will include beginning some very in-depth discussions and deliberations around a handful of the issue paper questions. They will also begin the CEQA process by initiating the CEQA process and holding scoping meetings. “We’ll also continue to work on the methodology, so we’ll have the information and be vetting that. Well be beginning to look at the other side of the equation which is the risks, probabilities and consequences, and keep working towards developing that methodology. And of course we’ll continue stakeholder engagement and outreach as well.”

Phase 4 will begin in spring and summer of next year with continuing discussions with the council, agency partners, and stakeholders around issue paper questions, she said. They will also be preparing for the independent review process, so they will bring walk through the methodology with the Council prior to the review; after the review, staff will return to talk about the recommendations, questions, comments from the panel and to talk about revisions to the methodology or any changes that need to occur because of that review, she said. After the independent review is completed, the first outputs from the computer-based decision making tool will be generated and that information brought out to the Council, stakeholders, and other public venues to deliberate and refine the outputs, she said. Also in phase 4, the CEQA process will be developing an administrative draft EIR.

Phase 5 starts in late summer to fall. “That’s when we’ll begin to develop our draft report that includes the investment strategy. We’ll be preparing a draft EIR. We’ll also begin to look at potential revisions to Delta Plan regulations, recommendations, and narrative, and of course bringing that information before the Council to have the discussion and get your guidance and feedback during that time frame. Then putting these public documents out for the appropriate public review comments, and then we’ll move into response.”

Phase 6, the last phase, will be in the first half of 2016. “That’s where we’ll begin to finalize the investment strategy, the EIR, our proposed regulatory changes to the Delta Plan, and other changes,” Ms. Messer said. “Again, much like the Delta Plan and the Delta Plan EIR process, that will include a lot of intensive discussion before the Council, with stakeholders, getting the Council’s feedback, their guidance, eventually your consideration of approval of the changes, and then moving towards finalizing the documents.”

Key issues to be discussed

Seven of the fifteen questions will be scheduled for discussion during the Council meetings likely beginning in January and extending into March. Two questions are technical in nature, and the other five question center around interests, goals and objectives.

“We as staff and the project team will be working to develop an organized and more formalized package to bring back to the Council to begin these discussions to get your guidance to work towards definition,” she said. “What this will do is allow us to provide guidance to our consulting team and the technical folks as they are working their way through developing a methodology and developing the tool. We anticipate we’ll revisit these questions often throughout the process.”

Supervising Engineer Dustin Jones then updated the council members on the ongoing activities. He said that this phase of the project is heavy with stakeholder engagement, data gathering and analysis. “On November 12, we had two workshops with members of our technical resources pool, some technical experts, staff from the state, federal, and some of the local agencies including RDs to give them an overview of what the model can do and what we’re planning to do with the outcomes, solicit their feedback and information and to engage them early in our data development,” he said. “I think that went very well; we received a lot of good feedback from those folks and there’s going to be more coming. They are definitely engaged and interested in the process.” He also noted the upcoming public meetings being held in the Delta on December 8 and 11 (now postponed).

The review period for the Delta Levees Draft Issue Paper closed at the end of October, and since then, staff has been reviewing the comments received. Mr. Jones said that they have divided the comments received into those which apply to the issue paper and those which apply more to the development of the levee investment strategy. “I’ll work with the Executive Staff reviewing those comments to see what we need to incorporate within the paper and what we need to direct more to the levee investment strategy effort,” he said. “We’ll incorporate the comments that benefit the paper and improve it, we’ll work that back in, we hope to bring a draft back in at the December council meeting.”

“We have a broad overview of different comments, but all of them we really appreciate,” Mr. Jones said.

Taryn Ravazzini updated the Council on the recent meeting of the Delta Plan Interagency Implementation Committee, which held its second meeting of the year in November. Ms. Razazzini said attendance was excellent with only a handful being unable to attend and sending their alternates.

The first item on the agenda was to discuss the framework and establish a consensus based forum and the group did agree to accept those guiding principles and therefore move forward pursuing consensus-based decisions. “This is not a voting body, that’s an important point to note,” said Ms. Ravazzini.

Other agenda items included Undersecretary Janelle Beland talking about the California Water Action Plan, a presentation on the activities in the Yolo Bypass, the Interim Science Action Agenda, and aquatic weeds.

“I felt that this meeting kicked off a great new use for the venue,” said Ms. Ravazzini. “I felt that members were much more engaged when they see the value in this particular forum, so we have several active things to be bringing back to them in five to six months.”

Ms. Ravazzini acknowledged the hard work of the staff and presenters for making the meeting a success. Council members in attendance also had enthusiastic words for the tone and accomplishments of the meeting.

Look for upcoming coverage of the Delta Plan Interagency Implementation Committee on Maven’s Notebook in the upcoming weeks.

Ms. Correa noted that several changes made since the agenda was last presented to the Council, including revised executive summary, more information added to the introduction about how the interim agenda will help prioritize science activities for the full SAA, clarified success matrixes, and other changes. She referred to it as ‘a demonstration of community progress’ towards One Delta, One Science, and a first step towards the full Science Action Agenda.

The Interim Science Action Agenda was presented at the Delta Plan Interagency Implementation Committee meeting, and she was encouraged as others were at the level of engagement and dialog that occurred. There was broad agreement from the DPIIC of the need for the prioritized Science Action Agenda and a commitment to work with the science program to develop that, she said.

“Some of the recommended actions that the DPIIC considered were participating in a cross-agency commitment to understanding and implementing the ISAA, meaning that it would commit science and policy managers to work with us, the Delta Science Program, over the next six months to both determine a science prioritization process moving forward, and identify high impact science activities for near-term implementation,” she said. “There was good discussion about what it meant to accept the Interim Science Action Agenda, and there were positive movements towards that and broad agreement that there could be acceptance of the agenda as an interim plan moving forward that lays out the science state and the areas that we could move forward in.”

After words of praise for staff from Council members, the Council approved motion to accept the ISAA unanimously.

The annual review of the biological opinion actions for the state and federal water projects: On November 6 and 7, the annual Long-term Operations Biological Opinions Annual Science Review was held, which is a requirement under the NMFS and USFWS biological opinions. “The agencies themselves don’t skirt around the edges in this,” he said. “Certainly in the three years that I’ve been here running that, they really pick some of the very big contemporary questions. This year, they asked the panel to look specifically at the modified Delta Cross Channel Gate opening criteria that’s described in the 2014 drought operations plan. The second issue they were asked to take a look at was modifications to the winter run salmon juvenile production estimate, particularly looking at the use and application of survival data that was obtained from acoustically tagged salmon releases. … The third topic they were asked to take a look at was a proposal that was put out for an alternative way of calculating the cumulative salvage index values, which is used for estimating take, that is expected to occur under the US FWS Old and Middle River flow RPA for adult smelt.” He noted that there was some very interesting discussion between the science panel and the various agency presenters. The panel report is due in early December.

Make a tax-deductible donation to Maven’s Notebook today and help make an impact on California water in 2015!