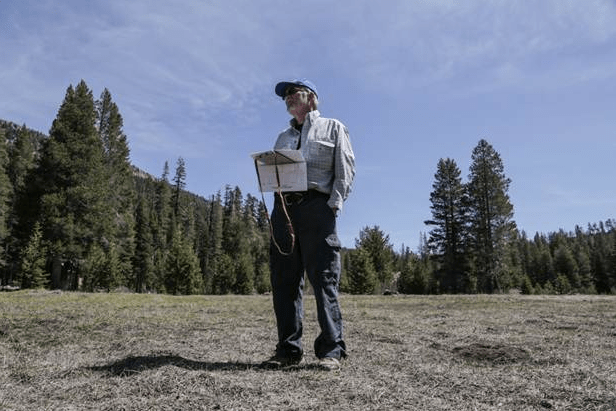 Today’s manual and electronic readings recorded the statewide snowpack’s water content – which normally provides about a third of the water for California’s farms and cities — at a mere ­­18  percent of average for the date.

Just as telling was the April 1 survey that found water content at only 32 percent of average at the time of year it normally is at its peak before it begins to melt into streams and reservoirs with warming weather.

“Anyone who doesn’t think conservation is important should drive up the hill and take a look,” said DWR Director Mark Cowin.  “Coupled with half our normal rainfall and low reservoir storage, our practically nonexistent snowpack reinforces the message that we need to save every drop we can just to meet basic needs.”

Most dramatically, today’s electronic readings show a dismal 7 percent of average water content in the northern Sierra snowpack that helps fill the state’s major reservoirs which currently are only half full.

Electronic water content readings for the central and southern Sierra are 24 and 18 percent of normal, respectively.

Snow surveyors from DWR and cooperating agencies manually measure snowpack water content on or about the first of the month from January through May to supplement and check the accuracy of real-time electronic readings from remote sensors up and down the mountain ranges.

California’s reservoirs obviously will not be significantly replenished by a melting snowpack this spring and summer.

With most of the wet season behind us, it is highly unlikely late-season storms will significantly dampen the effects of the three-year drought on parched farms or communities struggling to provide drinking water.

On January 31, with no relief from the three-year drought in sight, DWR set its allocation of State Water Project (SWP) water at zero.   The only previous zero allocation was for agriculture in the drought year of 1991, but cities and others that year received 30 percent of requested amounts.

After late season storms, DWR on April 18 increased this year’s allocation to 5 percent of requested SWP amounts.  If it stands, this will be the lowest across-the-board allocation in the 54-year history of the SWP.

Collectively, the 29 public agencies that deliver SWP water to more than 25 million Californians and nearly a million acres of irrigated agriculture requested 4,172,536 acre-feet of water this calendar year.

On April 25, Governor Edmund G. Brown Jr. issued an executive order to strengthen the state’s ability to manage water and habitat effectively in drought conditions and called on all Californians to redouble their efforts to conserve water.  On January 17, the Governor declared a drought state of emergency.

Electronic snowpack readings are available on the Internet at: http://cdec.water.ca.gov/cdecapp/snowapp/sweq.action

Electronic reservoir readings may be found at: http://cdec.water.ca.gov/cdecapp/resapp/getResGraphsMain.action