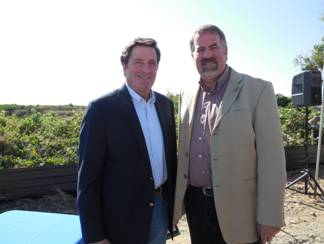 Today, Congressmen John Garamendi (D-CA-03) and Doug LaMalfa (R-CA-01) announced the bipartisan Sacramento Valley Water Storage and Restoration Act of 2014, which would authorize a feasibility study and construction of Sites Reservoir in Colusa County, California. The bill sets a deadline for the completion of the feasibility study and if deemed feasible, authorizes construction of the storage reservoir.  The bill also creates a process by which a non-federal sponsor could develop the project.  Once completed, Sites Reservoir would provide 1.9 million acre feet of water storage capacity for Northern California and would help residents prepare for droughts like the one currently impacting the state. This bipartisan legislation was developed with local stakeholders, primarily the Sites Joint Powers Authority (JPA), a regional consortium of local water agencies and counties who joined together in 2010 to advocate for the project.

“The devastation of the drought has highlighted the need for additional water storage. Sites Reservoir would dramatically expand our water reserves – and create jobs in the process. We must heed the warning of the book of Genesis: stock up during the years of plenty, so that you can get by in the years of need,” said Congressman Garamendi, who served as Deputy Secretary of the U.S. Department of the Interior under President Clinton. “I want to thank Doug and his staff for working with my office and the JPA in crafting this legislation. This bipartisan bill is vitally important for serving the water needs of California communities, agriculture and environment.”

“California’s current drought has made it more clear than ever that we need to invest in our state’s water supply by building Sites Reservoir. While California’s population has grown dramatically over the past few decades, we’re still relying upon a water supply system built generations ago,” said Congressman LaMalfa. “Sites Reservoir will bring 1.9 million acre feet of new water storage to California, enough for both agriculture and cities while also creating environmental benefits and thousands of jobs. It’s time to end the decade of studies and build this project, before the next drought cuts off water to our communities, farms and ranches.”

“The Sites Reservoir bill is a perfect example of what can be accomplished when people find common ground to reach common goals – in this case, addressing California’s water crisis through storage,” said Congressmen Garamendi and LaMalfa.

“We applaud the Congressmen’s bi-partisan efforts to take an important step forward in providing water security for California,” said Bryce Lundberg, Chair of Northern California Water Association. “We need new smart storage in California—the current drought has highlighted the importance and value of surface water storage during these critical times for cities and rural communities, family farms, wildlife refuges and fish in the Sacramento Valley and the Delta.”

“With California facing its most challenging drought ever, the time is right for creative new water infrastructure to provide jobs and water security,” added Fritz Durst, the Sites Project Authority Chair and a farmer and conservationist in the Valley. “Sites Reservoir will help assure nourishment and sustenance from the fields, habitats for migrating fish and the Pacific Flyway, and a special quality of life in the Sacramento Valley—while truly helping to achieve the co-equal goals in the Delta for water reliability and the environment.”

“This year is showing that water is the heart and soul of Northern California and the State of California,” according to Don Bransford, a farmer, conservationist and President of the Glenn-Colusa Irrigation District, one of the members of the Sites Project Authority. “The Act is a commitment to progressive water management in the Sacramento Valley and it will bring greater stability to California’s Central Valley Project (CVP), the State Water Project and California’s water system for future generations.”

Congressman LaMalfa is the lead sponsor of the legislation. The project advances state goals of regional self-sufficiency in water use. Storage is a key component of Congressman Garamendi’s “Water Plan for All of California,” which can be read at www.garamendi.house.gov/water.