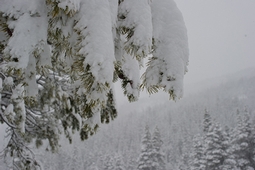 Storms are lightly blanketing the Sierra with fresh snow, but Department of Water Resources (DWR) snow surveyors today reported that snowpack water content remains far below what will be needed by cities and farms this summer.

“We welcome the late storms but they are not enough to end the drought,” said DWR Director Mark Cowin.  “We can’t control the weather but we can control the amount of water we use.  This drought is a wake-up call that we all have to take water conservation seriously and make it a way of life.”

Although freshly fallen snow brightened the scenery this morning as DWR and cooperating agencies trekked into the mountains to conduct the winter’s third manual snow survey, the state’s drought has left the Sierra largely bare for much of the winter.

And reservoirs are low.

On Tuesday, before the current storm system reached the area, water content in the statewide snowpack was 22 percent of normal for the date and only 19 percent of the average reading in early April when snow begins to melt into streams and reservoirs.  These readings were just above the 1991 record lows of 18 percent for the date and 15 percent of the April 1 average.  These records go back to 1960.

Manual and electronic readings today record the snowpack’s statewide water content just slightly improved at 24 percent of average for the date, still far below normal but with more snow expected.  That is 21 percent of the average April 1 reading.

Surveyors from DWR and cooperating agencies manually measure snowpack water content on or about the first of the month from January through May to supplement and check the accuracy of real-time electronic readings.

The snowpack – often called California’s largest reservoir – normally provides about a third of the water used by cities and farms as it melts into streams and reservoirs in spring and early summer.

California’s major reservoirs, mostly bereft of both snow and rain this winter as the drought pushes through its third year, are dangerously low.

With no end to the drought in sight, DWR on January 31 set its allocation of State Water Project water at zero.  The only previous zero percent allocation (water delivery estimate) was for agriculture in the drought year of 1991, but cities that year received 30 percent of requested amounts. This is the first time the allocation has been set at zero across the board.

Despite the “zero” allocation, water essential for health and safety will still be delivered.  And nearly all people and areas served by the State Water Project also have other sources of water, but most of these also are stressed by three successive dry years.

Deliveries will be boosted if storms produce enough rain and snow to boost reservoir storage and the snowpack.

Electronic snowpack readings are available on the Internet at:  http://cdec.water.ca.gov/cdecapp/snowapp/sweq.action

Electronic reservoir readings may be found at:  http://cdec.water.ca.gov/cdecapp/resapp/getResGraphsMain.action

For simple, every day water conservation tips, click on “Save Our Water” here: http://www.saveourh2o.org/