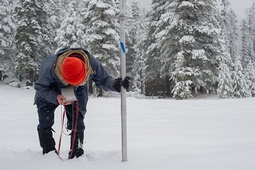 From the California Department of Water Resources:

“This winter remains dry, making it very unlikely our record drought will be broken this year,” said DWR Director Mark Cowin. “Now more than ever, we all need to save every drop we can in our homes and places of work.”

Manual and electronic readings today record the snowpack’s statewide water content at only 12 percent of average for this time of year. That is a mere 7 percent of the average April 1 measurement when the snowpack normally is at its peak before melting into streams and reservoirs to provide about a third of the water used by California’s cities and farms.

DWR and cooperating agencies conduct manual surveys on or about the first of the month from January to May. The manual measurements supplement and check the accuracy of real-time electronic readings.

Not only is water content in the mountain snowpack – often referred to California’s largest reservoir – low, but so are the state’s major water supply reservoirs.  The reservoir storage from winter 2012 storms that got most of California through last year’s (calendar year 2013) record dry weather is depleted, with each day reducing the odds rain and spring snowpack runoff will replenish supplies before summer.

Not only was 2013 California’s driest calendar year on records going back to 1895, but this month may go into the records as the driest ever January.

State Climatologist Michael Anderson noted that statewide, only 1.53 inches of rain was recorded from October through December, also the lowest aggregate total in records going back to 1895. The aggregate average for the period is 7.87 inches. California’s average aggregate rainfall for the entire Water Year (October 1-September 30) is 22.90 inches, meaning the state needs more than 21 inches added to the October-December total just to get back to normal.  “We are in record dry territory and this needs to be stressed,” said Anderson.

Governor Brown has called on all Californians to voluntarily reduce their water usage by 20 percent and last week, the Save Our Water campaign announced four new public service announcements that encourage residents to conserve. Last December, the Governor formed a Drought Task Force to review expected water allocations and California’s preparedness for water scarcity. In May 2013, Governor Brown issued an Executive Order to direct state water officials to expedite the review and processing of voluntary transfers of water and water rights.

Electronic snowpack readings are available on the Internet at: http://cdec.water.ca.gov/snow/current/snow/index.html