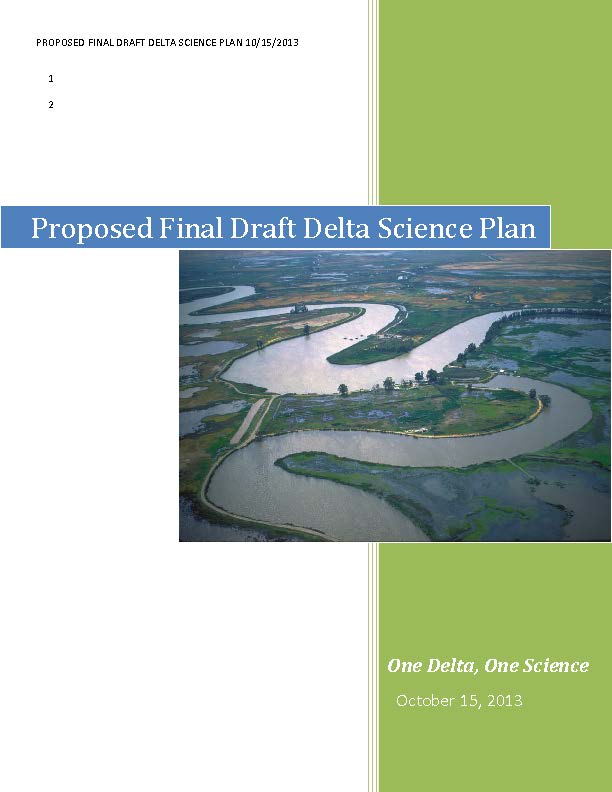 After thousands of comments, several meetings, and three drafts, the first Delta Science Plan has been completed and accepted by the Delta Stewardship Council at their October 25 meeting.

Lead scientist Dr. Goodwin began by noting that it is almost one year anniversary of when the science plan was started.  “We took on the moniker of “One Delta, One Science” early on,” said Dr. Goodwin.  “‘One Delta’ I think everybody understands, but the ‘One Science’ – I thought I would add a slight clarification to.  This does mean that there is one opinion or one model, but it’s science in the broadest sense, and within this, we want to embrace differences of scientific opinion; we want to support different models because this is how you accelerate knowledge discovery, by testing alternative hypotheses, by running models which make different assumptions, and by comparing and contrasting the difference.”

We want to provide a safe environment where scientists can explore different ideas without feeling that they represent a particular interest or that they are going to be attacked, he said.  “Decisions also have to be made in the face of uncertainty. … It is also important to understand the limitations of science and what science can do for you.  Science is not going to make the decisions nor should science make the decisions because for an ultimate decision, there’s value judgment.  What science can tell you is the most likely outcome or what is the most likely future that you’re going to be experiencing as a result of certain actions that are taken.”

It has been a long journey working on the science plan over the last year, said Dr. Goodwin.  “We’ve had well over a thousand individual comments … there were very little comments on how we’re proposing to structure things.  Virtually all of the comments were related to the details – how are we included, how can we participate, how can we support this effort,” he said, “and there were also some really wonderful ideas for conflict management on science issues that we’ve listened to.”

“There is an incredible depth of science here, with seven of the top twenty-five universities in the world here in California, according to recent China survey, and I think that’s really reflected in the comments we received,” said Dr. Goodwin.  “If you look at all of those discussions and comments and in some cases disagreements, it really has an incredible depth of thought.  People aren’t saying this is my opinion, they are saying, have you thought about this and then there are five citations, or they present an in-depth argument in those comments to be considered, so we’ve really appreciated that.”

It’s taken more than just the Delta Science Program staff to complete the Delta Science Plan, said Dr. Goodwin.  “Many of the scientists are totally overwhelmed right now … and yet there is this deep rooted passion amongst the science community here, and many of the big meetings we’ve had were scheduled in the evenings, the weekends, or on holidays, but the fact is that people have really stepped up around many of these issues and we really appreciate it.”  Dr. Goodwin also recognized the Delta Independent Science Board, the Interagency Ecological Program, and California Water and Environmental Modeling Forum for their efforts in completing the Plan.

The Delta Science Plan is built on national and global trends in science, said Dr. Goodwin, displaying a slide with quotes from Dr. Blatecky from the Cyberinfrastructure Framework for 21st Century Science and Engineering.  “Most important thing is that you look across any branch of science right now and you look at how research is being done, how the big breakthroughs are being made, basically science and scholarship are team sports, and hopefully you’ll see that as one of the guiding principles within the science plan.”

“California is somewhat different than the other large ecosystem management programs around the country,” said Dr. Goodwin.  “Most of these other big programs are driven by a single issue.  In Louisiana, it’s about land building or protection of land.  If it’s Chesapeake Bay, the driving issue is water quality.  Here, you’re facing a much more complex problem.  In order to get at the coequal goals, and you look at the stressors, the whole science and what you’re asking the science community to do is much more complex.  This is an enormously complex system.”

There have been a few changes to the plan based on the direction received from the Council at the last meeting.  “You pointed out very articulately about the urgency of the science and this truly is high-stakes science,” said Dr. Goodwin.  “It’s directly affecting 25 million residents in the state of California; we’re looking not at millions of dollars as consequences for many of the decisions, but billions of dollars are on the line, so you’ll see that reflected in the introduction to the plan.”

“What is sometimes underappreciated is that in order to really conduct science from the community perspective, you need the community infrastructure,” he said. “It’s not sufficient just to say let’s have a few meetings, let’s get together.  If you’re really starting sharing data, if you’re building models, if you’re expecting scientists to come to the table who’ve read the same journal articles as everybody else, there’s a lot of infrastructure that is not available to our full science community, and so you’ll see a big emphasis on that.”

The Plan is divided into two new organizational structures, the Policy-Science Forum and the Science Steering Committee.  “The policy-science forum is identifying the issues,” said Dr. Goodwin.  “It’s the way the science community communicates with the leaders – those making policy decisions, and it’s also a way of the policy community of communicating to the science community directly.”

The science steering committee will translate the high level debate into actionable science, said Dr. Goodwin.  “The two rotating that come out of the process are a science action agenda – essentially the work plan … and the feedback mechanism, which is the State of Bay Delta Science, which is the reporting back of what are the advances in knowledge that were highlighted in the science action agenda and the challenges that were set by the policy community.  It is a continuous loop.”

The Delta Independent Science Board told us not to forget what the National Research Council said about synthesis being a priority, and also asked us to refine how the Plan manages scientific conflicts and minimizes ‘combat science’.  So we are proposing to use rotators, similar to the model used in the federal government, said Dr. Goodwin.  “Rotators are when people cycle on to the staff and work with the staff on doing things like distributing research dollars, setting up review panels, putting together invited speakers for workshops and so on.  The idea is that these folks, they come in and keep the science program alive with new ideas.  It also means when those rotators return to their agency or other organization, they understand how the science program operates, so it’s transparent; there’s nothing hidden.”

The Delta Science Plan has a range of tools and a timeline for delivering information, said Dr. Goodwin.  The easier questions can be responded to internally with the expertise on staff or by turning to experts in agencies or other organizations.  If there is a little more time, we can contract directly with expert advisors or invite white papers, he said.

With more time, the science program can invite review panels, said Dr. Goodwin.  “Review panels are held usually when there is a report or a product to review,” he said.  “Workshops are more exploratory, so if there’s a big problem out there and you need some information on a certain topic, it takes a little longer to plan and to execute a workshop like that, but then there is a definite outcome and report with recommendations.”

The collaborative analysis and synthesis mechanism is a process to use when there is a clear legitimate difference of opinion or uncertainty in information.  “This is a way to bring the different groups with an idea together and to spend some time with biostatisticians, postdoc researchers, whatever resources they need, to produce an in-depth analysis and report on a particular issue,” he said.  If there is a long time frame to work with, questions can be put out to competitive bid or science fellows can conduct specific research.

The final Delta Science Plan includes a preamble written by former Delta lead scientists, a revised problem statement, and a prioritized list of actions in the summary table.

Dr. Wagner gave us good advice that mirrored Dr. Weins from the ISB about when is good enough, said Dr. Goodwin.  “He said that we could sit and debate and agonize on the wording of the science plan for many months and we probably wouldn’t get much further, and his recommendation was – it looks pretty good.  If people are comfortable with it, start, but have monitoring throughout that year and do a very strong independent assessment of the science plan after 12 months.  What is working really well, and what areas need tweaking,” he said.  “We thought that was a great idea and we would like to embrace that, so that we would start right at the beginning with an assessment from the outside, you collect data for a year, consider an update in a year.”

With the science plan in place, we’re proposing to create a interim science agenda in the early part of 2014 while we develop a full action agenda, he said.  It’s a two year process to develop one, according to other science programs around the country that have similar programs, and we don’t want to sit around waiting for that, he said.  “Our idea was to do a synthesis of all of the good work that is out there, and look for the gaps and get something we can start running with.”

We hope to have the State of Bay Delta Science completed by the end of next year, which will be the starting point or baseline for this new era of doing science in the Delta, said Dr. Goodwin.

The Council then unanimously voted to accept the Delta Science Plan.

“At times of change, the learners will be the ones who will inherit the world, while the knowers will be beautifully prepared for a world that no longer exists.”  –Alastair Smith  (Quote from one of Dr. Goodwin’s slides)