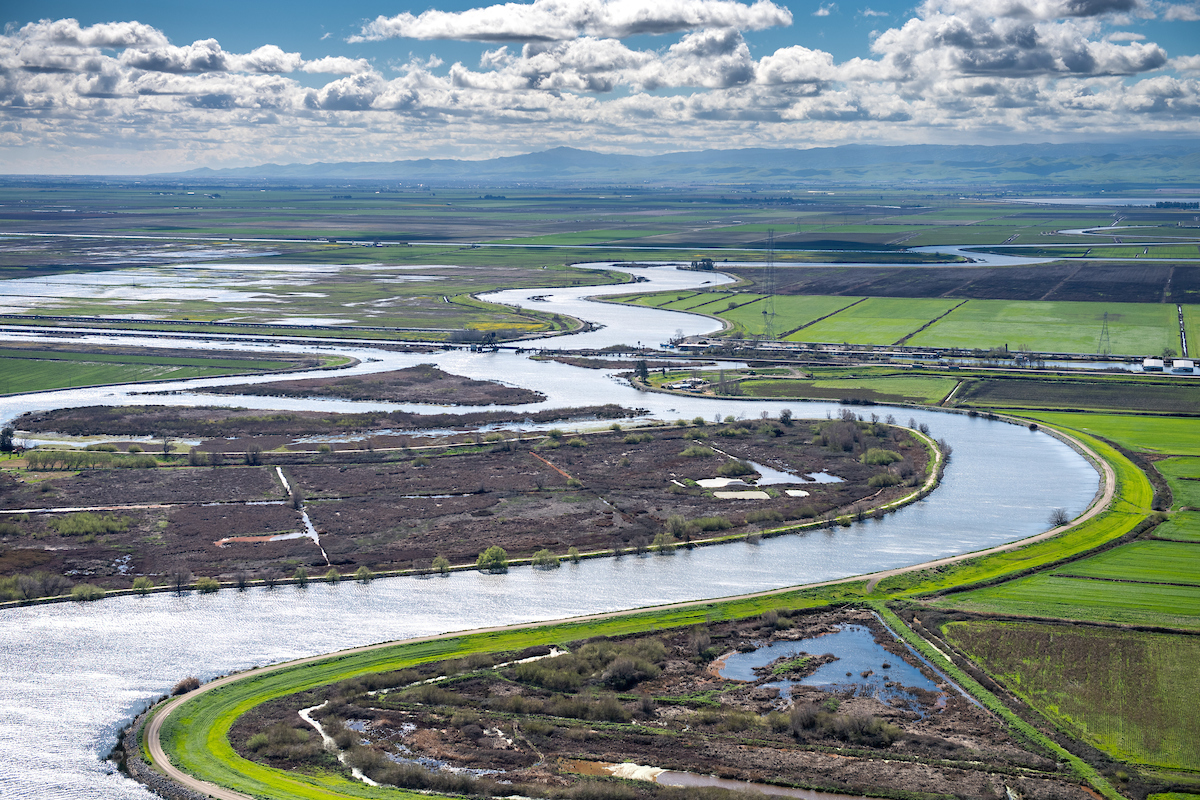 Governance of cross-scale dependent systems such as estuaries requires integrating knowledge about biophysical and ecological connectivity in its multiple forms and scales. While scientists, managers, and policymakers increasingly recognize the importance of connectivity, ecosystems with strong cross-boundary dependencies challenge current environmental governance structures.  In each of its forms, managing connectivity requires building social connectivity to increase the flow of information and social and financial capital among formal and informal governance bodies.

Dr. Annika Keeley and Eva Bush, both senior environmental scientists at the Delta Science Program, are among the co-authors on a paper titled Connectivity Metrics for Conservation Planning and Monitoring, synthesizing this body of work and directly applying it to conservation challenges.  In the article, they reviewed 35 different connectivity metrics and developed a decision tree for conservation managers to help them determine the most appropriate connectivity metric for their conservation objective, given the landscape context, and if applicable, the species of interest.

At the 2022 Bay-Delta Science Conference, Dr. Annika Keeley gave a presentation describing the different types of connectivity within ecosystems and how multiple forms of connectivity can be governed in the Bay-Delta.

Last year, a symposium was held to bring together the many scientists working on many different aspects of connectivity in the San Francisco Estuary.

There are six components to connectivity in estuaries:

Longitudinal connectivity is the linear directional movement up or downriver.  The flow of water from high elevation streams to the ocean is the defining aspect, transporting organisms, materials, energy, and disturbances.  Sediment transport and then deposition creates complex, dendritic river deltas and productive, biodiverse wetlands.

Dr. Keeley noted that an increase in connectivity could also negatively influence ecosystem function. For example, in the San Francisco estuary, channel cuts, straightened river channels, and levees improve water conveyance and navigation efficiency but also increase connectivity. As a result, physiochemical conditions are homogenized, primary productivity is reduced, and there’s a lack of low-velocity refugia that aquatic organisms really need, she said.

The intersection of land and water in estuaries creates complex, dynamic, and biologically rich transition zones; this is lateral connectivity. In addition, hydrologically connected habitats such as tidal wetlands, riparian forests, and flood plains facilitate the exchange of materials, energy, and organisms.

Disruptions to lateral connectivity are widespread. Levees, dikes, ditches, canals, and cities all prevent lateral connectivity. Another negative effect of lateral connectivity between human-impacted areas and estuarine waters is contaminant loading, which can harm organisms inhabiting aquatic habitats connected to sources of pollution, such as fertilizers from agricultural lands and surface runoff from roadways.

Contaminant loading such as fertilizers from agricultural areas and surface runoff from roadways is another negative effect of lateral connectivity between human-impacted areas and estuarine waters, potentially harming organisms inhabiting the aquatic habitats connected to sources of pollution.

Vertical connectivity occurs when there are vertical exchanges between surface waters and the shallow groundwater.  The undulations in a channel bed drive the vertical water exchange, which is vital for nutrient exchange. It can also create thermal refugia for fish in sites of groundwater upwelling.

In estuaries with extensive low-lying plants adjacent to channels, vertical connectivity is closely related to lateral connectivity along river channels.  Downstream in the estuary, mixing of brackish and saline water and tidal forcing add increasing spatial and temporal complexity to these interactions.

“In the San Francisco estuary, vertical connectivity was largely disrupted as an effect of disruption to lateral connectivity,” said Dr. Keeley.  “As wetlands were diked off, drained, or filled, it reduced the area over which floodwaters could spread. As lower reaches of rivers were straightened and dredged, loss of bed undulations resulted in a loss of upwelling size.”

Subsidence of the soil on Delta islands requires pumps to prevent the water table from rising and waterlogging crops, keeping the water table at unnaturally deep levels, and eliminating vertical connectivity between surface and shallow groundwater. As a result, formerly extensive riparian forests and tidal wetlands that the shallow groundwater has supported have been reduced to primarily small isolated patches.

“Reestablishing lateral and vertical connectivity in estuaries, for example, through reconnecting floodplains to the rivers and stopping groundwater overdraft can be a trade-off between water used for humans and ecosystems,” said Dr. Keeley.  “Economic disparities need to be considered in the planning process when leveraging ecosystem services of floodplains such as flood control.”

Lattice connectivity describes omnidirectional movements by species and matter in and among adjacent lattice elements represented by cells or polygons on maps. Lattice connectivity differs from longitudinal, lateral, and vertical connectivity in that movement does not necessarily occur along specific dimensions but can go in any direction.

In the lattice connectivity model, the loss of crucial corridors can severely disrupt connectivity, and the removal or mitigation of barriers has the potential to increase connectivity dramatically. For example, estuaries, marshes, floodplain forests, and riparian areas provide ideal movement corridors for terrestrial wildlife and species that may fly but have short dispersal or daily movement distances, like birds, insects, and also bats.

“Restoring lattice connectivity in the Bay-Delta requires strategic habitat restoration,” said Dr. Keeley.  “We also need to consider where crossing structures over major roads and aqueducts is necessary. In addition, there’s an opportunity to improve the ecological quality of linear features, such as roadsides, levees, agricultural field margins, and ditches, which can enhance habitat connectivity for invertebrates, birds, and other wildlife.”

Connectivity to adjacent and distance ecoscapes

Estuaries in the natural state function as ecological crossroads, supporting many species for only a portion of their life cycles, so maintaining the linkages to the ocean and other coastal areas, adjacent watersheds, and distant ecoscapes is critical.

The green sturgeon is an example of a migratory species dependent on the estuary to be well connected to adjacent and distant ecoscapes.  The green sturgeon moves through the estuary to reach spawning grounds in the upper portions of the Sacramento, Feather, and Yuba Rivers and back to the ocean.  Other species such as butterflies, bats, and birds depend on reliably timed and abundant resources that the estuary can provide, such as western sandpipers who utilize a vast network of estuarine habitats throughout the annual cycle, the San Francisco estuary being one of them.

“No surprise, population declines in both green sturgeon and Western sandpipers have coincided with human alteration of the estuary,” said Dr. Keeley.  “While it now supports conveyance of freshwater through south of the Delta and marine transit, the resulting trophic structure is less complex, and seasonal abundance is less reliable. Human transportation routes also break down natural barriers and bring with them the introduction of non-native species, which can, in turn, disrupt connectivity patterns and processes.”

The cumulative effects of altered connectivity within and among connectivity components can have nonlinear responses to ecosystem functions, Dr. Keeley said.  She noted a good example are the significant population declines of salmon, caused by the loss of habitat and the loss of spawning gravel due to the sediment trapping behind the dams.

“Several of the components of ecological connectivity that I just elaborated on cross the traditional scales of governance, and problems can arise when connectivity for cross-scale dependent ecosystems challenges existing governance structures that were designed for different purposes,” said Dr. Keeley.  “This is known as a scale mismatch between governance structure and ecological processes. Compounding this, the terrestrial and aquatic grounds are often managed by separate natural resource management agencies.  Scientists, managers, and policymakers are increasingly recognizing the importance of connectivity for ecosystem functioning.”

“Because in most cases, existing governing structures are unlikely to change, what becomes really important are organizations that bridge across scales by supporting communication and coordinating knowledge and actions across agencies and organizations,” she continued.

To restore appropriate connectivity, Dr. Keeley and her co-authors recommend:

QUESTION:  The scale mismatch that you point out and the social-ecological fit is the critical question for the Delta in thinking about the multiple levels of decision-making across various institutions.  Based on your work and the system and your embeddedness in the Delta science program, where you see potential barriers or factors that enable moving towards a better fit between the social and ecological components?

Dr. Keeley:  “I think the Delta Stewardship Council is a pretty good example, actually in two directions. One is that its mission really is to connect to make sure that the different agencies work together and plan together and exchange information. But the other aspect is that the work focuses on the legal Delta and Suisun Marsh, which is only part of the huge system.  We also have the Bay Area and the huge watershed. And then all these other ecosystems are connected long distance to the Delta. And we are aware of all the impacts, especially of the larger watershed on the Delta, so I think that there needs to be more work happening between agencies and organizations that work in the different systems.”

Dr. Keeley noted that she’s only been here for two years, so her background is a bit lacking.  “The system is very complex. And I’m still not very familiar with all the different government structures. But the Delta Stewardship Council is definitely a bridging organization set up that way. And I think several of the nonprofit organizations probably work in a very similar way, such as American Rivers or Ducks Unlimited. And scientific organizations like Point Blue are really invested in migratory birds and doing studies there and informing really science at really the cross-scale of two adjacent and very distant ecosystems for migratory birds. So I think there are some organizations and agencies that are working on this, but it’s so complex. There are so many facets to it, I think that there’s always a need for more.”

FINAL THOUGHT: “There’s often a disconnect between terrestrial and marine systems,” said Dr. Keeley.  “And in a way, in the Delta, that is to some degree, bridged by NOAA … they are responsible for marine fish species, among other things, and they are working in the Delta because of the migratory species coming into the Delta. So, the salmon especially, so there’s some overlap between the marine and the terrestrial world, thanks to the species moving through the system.”

Type to search or hit ESC to close
See all results