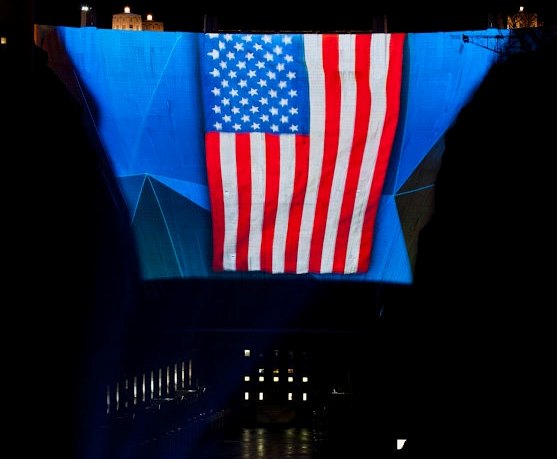 Happy 4th of July!
Wishing you a peaceful and enjoyable holiday …

Maven’s Notebook is going to take a pause for the next couple of days, but I’ll return on Sunday with the weekend edition of the Daily Digest.  In the meantime …

Take a good look at the picture and you will see that it is the flag projected onto Hoover Dam.

Back in 2015, Hoover Dam was used as backdrop for the debut of a new Daimler Freightliner truck – the first licensed autonomous commercial truck to operate on an open public highway in the United States.  Hoover Dam was selected for the unveiling of the truck ‘because it represents America’s ability to dream big and accomplish amazing things, even in the midst of adversity,’ according to the press release.

And, you know, what better place to show off a self-driving multi-ton semi-truck then on the top of a critical piece of infrastructure that supplies water and power to the southwest and would certainly be a catastrophe if something went wrong.  (Anyone seen “Anchorman”? 😆 )

The truck drove on top of the dam while the dam itself was used for a projection surface.  According to the Associated Press, the presentation used the equivalent of about 1,400 household light bulbs from 60 projectors to cast images of videos, animation, historical photos and the American flag onto the face of the dam; the presentation was six years in the making.

(All photos courtesy of Bureau of Reclamation.)