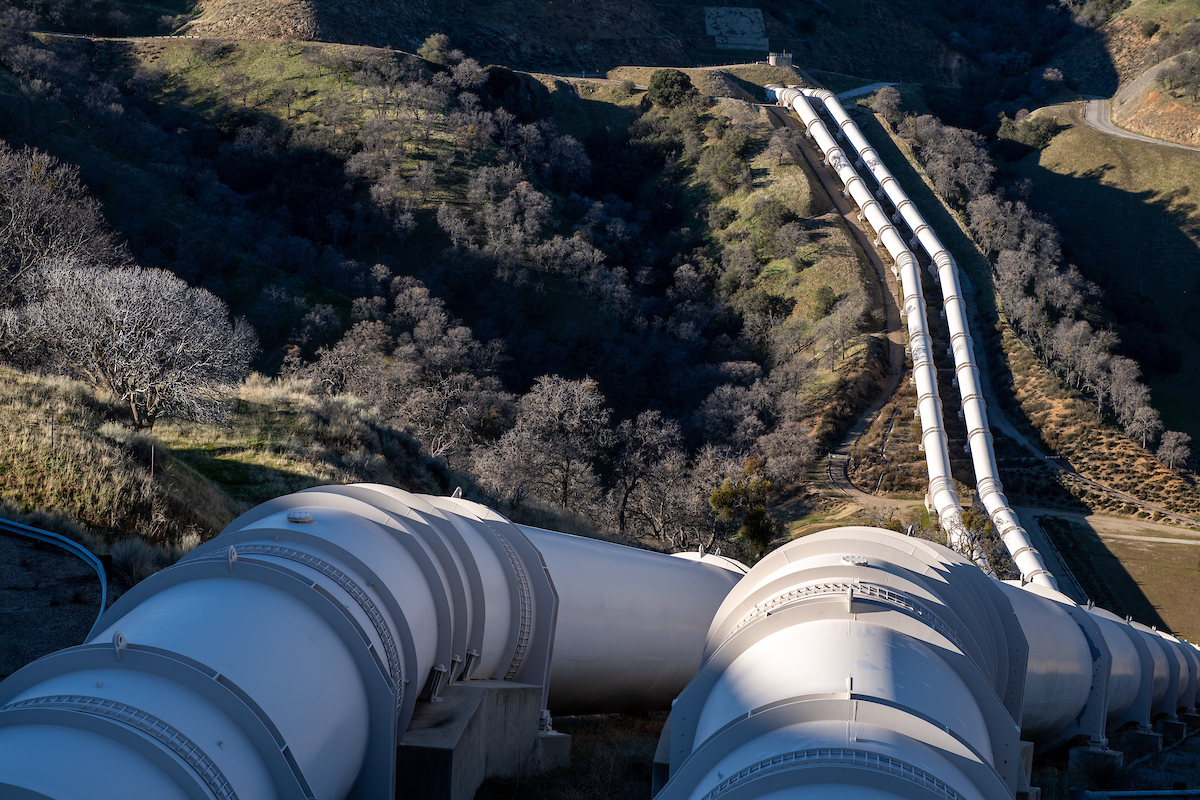 Pastoria Siphon, Twin 16 feet steel pipes, part of the California State Water Project which conveys water from the San Joaquin Valley to Southern California via the Tehachapi Crossing Tunnels. The features at the crossing consist of 4 tunnels and a large diameter siphon. Tunnels Number 1, 2, Pastoria Siphon, Tunnel 3, and Carly V Porter run from north to south across the Tehachapi Mountains in Kern County, California. Photo taken January 24, 2019. Ken James / California Department of Water Resources, FOR EDITORIAL USE ONLY

Ms. Ruffolo began by noting that this was the first year the Commission staff worked closely with the State Water Project to develop the report; there were eight presentations by staff throughout the year covering a wide range of issues that set the stage for this report.

There were three key issues for the State Water Project in 2019.  First, the Department of Water Resources completed the vulnerability assessment that described the expected effects of climate change on the operations of the State Water Project.  Second, Governor Newsom’s Executive Order N-10-19 that called for the state agencies to develop a water resiliency portfolio, as well as directed a different course for the Department on Delta conveyance.  Third, the Department completed the recovery work at Oroville.

John Andrew, DWR’s Deputy Director for climate change, presented the vulnerability assessment at the Commission May 2019 meeting.  The adaptation plan was expected to be released sometime this year.

The assessment qualifies the most likely effects of climate change on the operation of four key performance measures of the State Water Project:

Reduction of Oroville end of April storage, which is the amount of water in storage at the end of the main runoff season; it is likely to be significantly reduced by 2050 with a loss of about 130,000 acre-feet or almost 4%.

Reduction in Oroville carryover storage, which is the amount of water in storage at the end of the irrigation season but before the rains begin.  That carryover storage is expected to fall from the current level of 1.88 MAF on average to 1.53 MAF.  This is highly sensitive to changes in temperature, sea level, and precipitation.

Diminished water deliveries for the 29 State Water Project contractors, which are highly sensitive to changes in temperature and precipitation, so the expectation is that deliveries will diminish faster as precipitation decreases and deliveries are expected to be less reliable, particularly in drier years.

In April of last year, Governor Newsom issued Executive Order N-10-19 instructing his administration to prepare a water resilience portfolio as well as to reassess the approach to Delta conveyance.

The Executive Order called upon the Resources Agency, along with Cal EPA and the Department of Food and Ag to develop the water resilience portfolio.  The draft portfolio was released in January of this year, and a final is expected to be released later this year.  It was expected to be done in March or April but with the COVID-19 interruption, Ms. Ruffolo noted that it is likely to be delayed.

In 2019, the Department of Water Resources completed the reconstruction work at Oroville after the 2017 spillway incident.  Both the gated spillways and the emergency spillways are finished and the main spillway was first used in April 2019.  DWR also reopened public access to the Dam Crest Road and parking area and the spillway boatramp which are popular recreation facilities up at Oroville.

The State Water Project delivered over 3 million acre-feet in 2019.  Contractors received an initial allocation of 10% which was eventually increased to 75% by June 19 of last year.

DWR staff reported that approximately 65% of energy sources were emissions free.  They anticipate reaching 75% in 2030 and 100% by 2045.  The State Water Project is increasing its purchase of renewable energy, solar and small hydropower and reducing its market purchases of electricity down from the current of about 30% to 0 in 2045.  The State Water Project is also shifting its pumping load to take advantage of solar power availability during the day.

Ms. Ruffolo noted that the Department’s efforts to address climate change have not gone unrecognized as on March 5th, the Center for Climate and Energy Solutions and the climate registry presented the Department with the Climate Leadership Award for organization and leadership, marking the fourth time in six years that the Department has received the award.

Last year, DWR initiated an inspection and condition assessment effort at dams and facilities to identify the work that needs to be done throughout the system.  Based on those assessments, DWR initiated the dam modernization programs to reduce seismic and hydrologic risk at Pyramid, Castaic, Perris, and Sisk Dams.  Also in 2019, DWR completed its inundation mapping for 15 dams and submitted 9 emergency action plans to Cal Office of Emergency Services for approval.  Six more emergency plans are also in progress.

In March of 2020, the Department obtained a 10 year incidental take permit for state listed endangered species under the California Endangered Species Act that will allow the long-term operation of the State Water Project.  The permit covers spring-run chinook, winter-run chinook, Delta smelt, and longfin smelt; all except the longfin smelt are also listed under the federal Endangered Species Act.

“Under DWR’s new approach, the State Water Project will have a state permit for all four species and therefore endangered species act coverage under state law will be independent of any changes in the federal law or policies,” said Ms. Ruffolo.

In April, DWR announced a three year research project taking place on the Yuba-Feather River system which has a long history of devastating floods.  DWR is working with the Yuba Water Agency, Scripps Institute of Oceanography, and the US Army Corp and the National Oceanic and Atmospheric Administration to improve storm and runoff forecasting and to assess the potential for changing reservoir operations to better manage precipitation from atmospheric rivers while saving water supply.

Climate change is causing more atmospheric rivers and less snowpack and water managers throughout the state are looking at ways to capture more precipitation, but can be constrained by reservoir operating rules for releases of water stored behind dams to create more room for incoming floodwaters.

“If the pilot project can show that this Forecast Informed Reservoir Operations or FIRO can reduce flood risk while increasing water supply, then this research program could lead to updating the operating rules for Oroville and other reservoirs,” said Ms. Ruffolo.

The Department completed its report on subsidence along the California Aqueduct which was released at the end of last year.

“The main finding of the subsidence report was that the Aqueduct has sustained an alarming and unprecedented increase in subsidence rates,” said Ms. Ruffolo.  “In the three years of drought from 2013 to 2016, areas of the aqueduct sank nearly 3 feet.  The causes of subsidence include deep groundwater pumping which typically ramps up during extended drought periods such as we just had and the effects of climate change are predicted to exacerbate this trend, as well as the recent conversion of row crops to orchards and vineyards which are permanent crops and cannot be fallowed in dry years.  This has resulted in more subsidence when surface water is unavailable during dry periods.”

The impacts of subsidence are increased water delivery costs as the subsidence has reduced the flow capacity of the aqueduct in certain areas and in order to maintain water deliveries, operators must move water more often during on peak hours, which increases operating costs and limits the use of renewable energy sources.

Another impact is decreased reliability.  As the aqueduct sinks, there is increased risk that water will go over the aqueduct liner which could result in erosion or damage to other delivery structures which could cause delivery losses and flooding, requiring emergency outages of the aqueduct.  The subsidence also increases maintenance costs as the Department must continue raising the aqueduct lining and embankments as well as repairing and/or modifying appurtenant structures.

The map on the left of the slide has the most subsided areas of the aqueduct circled and on the right are the critically overdrafted groundwater basins.

“To address the subsided aqueduct, DWR will have to work with the Groundwater Sustainability Agencies and landowners in these areas,” said Ms. Ruffolo.

The Department of Water Resources and the Bureau of Reclamation have been working on restoration projects to comply with the National Marine Fisheries Service biological opinion.  Those projects include the Wallace Weir Fish Rescue Facility, the Fremont Weir Fish Passage Project, and the Yolo Bypass Salmonid Habitat Restoration and Fish Passage Project.  Wallace and Fremont Weir fish passage projects are operational; the Yolo Bypass is in the permitting phase and construction is planned to begin next year.

There are projects underway to create or restore 8,000 acres of Delta smelt habitat to comply with the US Fish and Wildlife Service biological opinion.  These projects include tidal habitat restoration projects on Decker Island, the Tule Red Restoration Project and Wither Island Restoration Project, and Yolo Flyway Farms.  Additional habitat projects are under development to be completed by 2022, including Prospect Island, Lookout Slough, and Arnold Slough.

In 2012, the Thermalito facility was severely damaged in a fire; the facility’s restoration project was completed in 2019 and is now in start-up mode and expected to be operational this year.  In response to the fire, the Department undertook a fire modernization project for facilities statewide.

The State Water Project annual review also describes specific projects such as pipeline condition and assessment work, the Gianelli Pumping Plant Generator and Valve Refurbishment, the Chrisman Pumping Plant Apron Repair, inspections and repairs of tunnels and a siphon at the Techachapi Crossing, and inspection and condition assessments at Pyramid Dam and Lake, and Cedar Springs.

The report focuses on the issues highlighted in the Commission’s strategic plan, which includes the objectives of keeping apprised of how the State Water Project adapts and responds to hydrological extremes expected with climate change, how it restores critical ecosystems, and how it addresses aging infrastructure.  Other objectives relative to the strategic plan include coordinating with DWR to enhance public engagement for the new Delta conveyance project and monitoring DWR’s efforts to address aging infrastructure through its asset management program.

Each of the recommendations in the report calls for DWR to keep the Commission informed on a particular topic.  Ms. Ruffolo noted that there are many topics, more so than can be covered in a year, but the issues highlighted by the recommendations are critical to the State Water Project moving toward resiliency to dealing with aging infrastructure in a time of greater uncertainty in the water year, such as increasing temperatures, reduced snowpack, and all the other challenges facing the state’s water system.

She noted that some of the topics, such as the potential for Forecast Informed Reservoir Operations, will be long-term actions, requiring studies, feasibility assessments, and regulatory changes, and even acts of Congress before they can become widespread operating practices.

After the completion, the Commission voted unanimously to accept the report, 5-0.