Senator Darryl Steinberg talks about the tunnels and the water bond 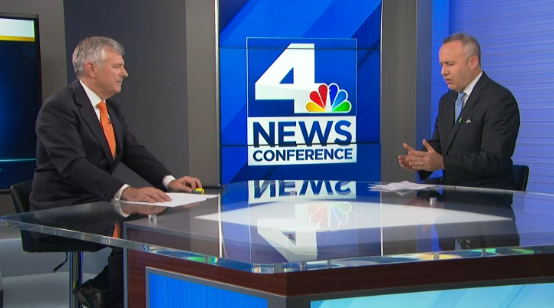 Senator Darryl Steinberg appeared on NBC Los Angeles News Conference, where he spoke about a number of issues, one of them being the water bond.  Here’s what he had to say:

Conan Nolan: Next week some policy decisions will be heard in the California legislature regarding water, and we’re not just talking about drought, but long term water allocations to Southern California, the San Joaquin Delta, to farmer. Darryl Steinberg, Pro Tem of the Senate, let’s talk about that.

Senator Steinberg: I liked the bond at the time, but something has changed over the last five years, and it’s this. The issue of the tunnels around the Delta and water moving …

Senator Steinberg: That’s correct. And I believe that there’s actually some merit in building conveyance around the Delta. I think there’s a lot of debate and discussion to be had about how big the tunnels should be, etc, but it’s a complicated issue and I want to make it as basic as I can. 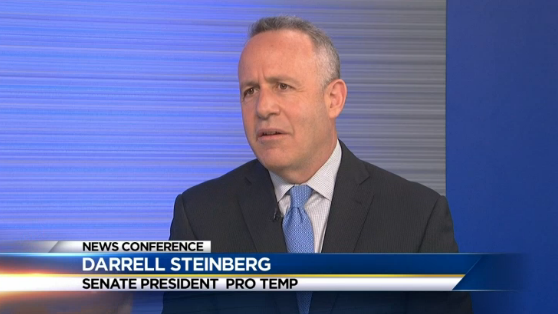 If the water bond is a referendum about the tunnels, and there’s money that goes, even indirectly, to helping make the tunnel project happen, all of our public polling tells us that that bond is doomed to defeat. And so it becomes a north-south water fight; we don’t want to have that. So we need to write a water bond, and I think Senator Wolk’s bond finds the sweet spot here, that invests in storage which the Republicans and the ag folks like, invests in clean safe drinking water, water quality, the San Joaquin Delta itself, without stoking that north-south water war. If we can do that, given the drought, I think we can actually pass a relatively large bond. I think the people are willing to look at a $10B bond, or a little over. If we can get it a little lower, that is fine, but the polling shows that given the drought, now ought to be the time that we go and take this question forward. It would be a mistake in my view to delay this again until to 2016.

Conan Nolan: There’s some who have suggested it’s gods in the details, and in that bond, you have the Delta Conservancy which is an environmentally leaning group …

Conan Nolan: … As the arbiter of where much of this money goes.

Senator Steinberg: Only the Delta money.

Conan Nolan: The Delta money – you have the water agencies, including Metropolitan and others saying, oh my gosh, this is not fair, it’s going to skew the whole process.

Senator Steinberg: You have a Governor who’s going to be reelected to a second term who is pro-tunnels. You’ve got the majority of the legislature that I believe is pro-tunnels. Money for Delta ecosystem restoration does not have to be a stick in the eye of northern California to say that we’re using this money to help build the tunnels. There’s money in Senator Wolk’s bond for Delta ecosystem restoration, and no matter what we do, money will go to helping support the agenda of those who want to see some form of alternative conveyance built. It’s how it’s done.

Conan Nolan: Before we go further, the Governor has not said whether or not he will support putting an alternative on the ballot for the water.

Senator Steinberg: That’s very true. But here’s the risk. We can keep the 2009 bond on. Because it’s perceived as being pro-tunnels, it potentially stokes that north-south war …

Conan Nolan: One quarter of all voters live in LA County. Why can’t we take on …

Senator Steinberg: Because the polling shows that if this becomes that kind of a fight, it clouds the issues, becomes divisive, and hurts our chances.

Conan Nolan: Let’s talk about something else on the ballot. There’s an initiative that will require doctor’s to get drug tested …

Click here to view the clip at NBC Los Angeles.