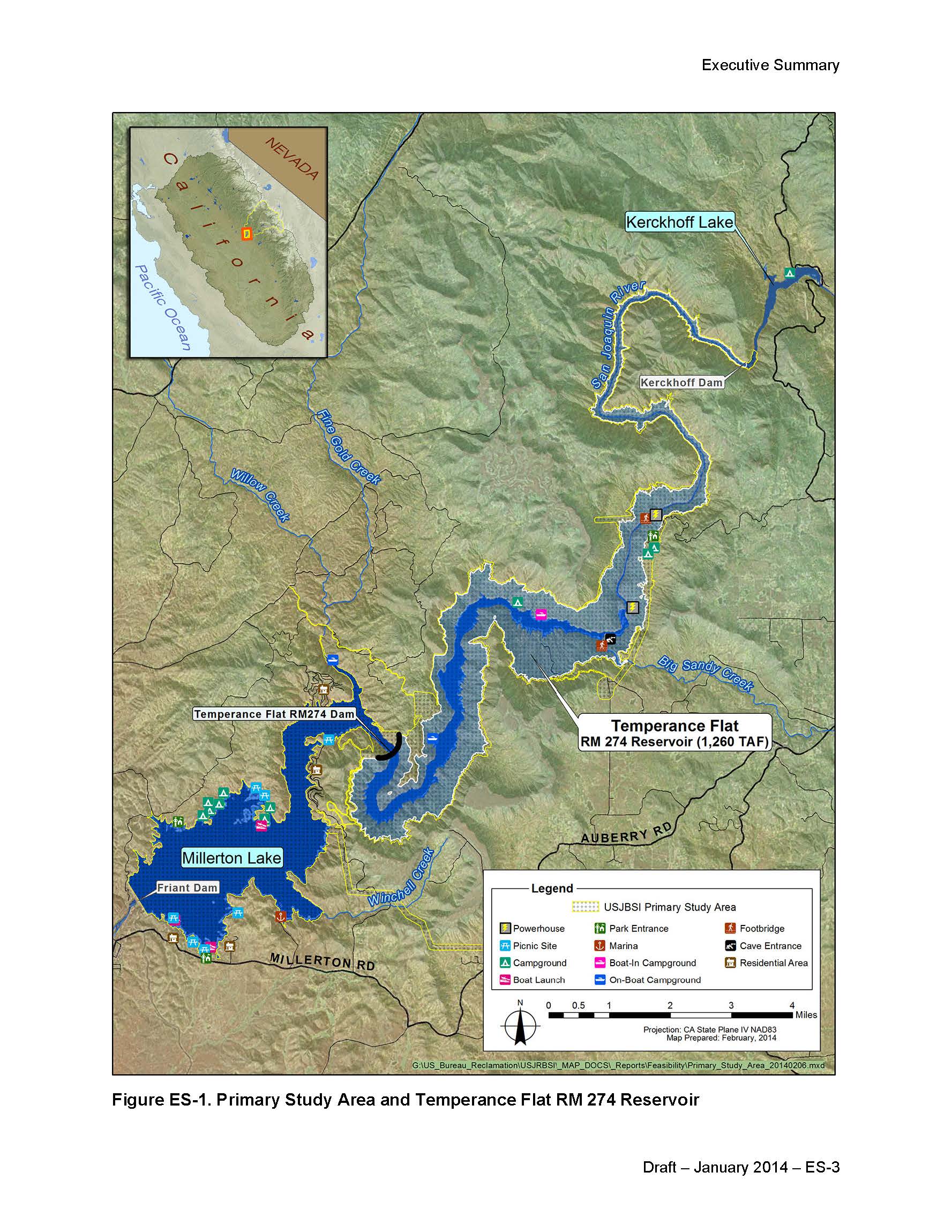 A dam on the Upper San Joaquin River at Temperance Flat would cost $2.5 billion, provide benefits from $95 to $578 million, and could potentially provide water for both Central Valley agriculture and State Water Project users, according to the draft feasibility analysis released by the Bureau of Reclamation.

A dam at Temperance Flat has long been sought to supplement the meager capacity of Friant Dam’s 520,000 acre-foot Millerton Lake, relatively small in capacity for the 1.8 million acre-feet of runoff that flows through it annually on average.  Due to the reservoir’s relatively small size, Friant Dam functions more as a diversion dam, channeling the water into the Friant-Kern and Madera canals, with the reservoir turning over 3 to 4 times a year, according to Friant Water Authority General Manager Mario Santoyo.  On average, 450,000 acre-feet is lost to flood releases each year, with 14 million acre-feet lost over the past 30 years, according to Mr. Santoyo.

In addition, the dam at Temperance Flat would provide unique operational flexibility to both the Central Valley Project and State Water Project operations.  Because water from the project could be delivered north to the Delta, swapped for supplies at the Mendota Pool, or south to Kern County and potentially into the California Aqueduct, potential beneficiaries include not only water users in the Friant division, but also other south of Delta CVP and State Water Project water users as well.

A dam at Temperance Flat would have a capacity of 1.3 MAF, and depending on the carryover storage target, would produce an additional 61,000 to 76,000 acre-feet per year on a long-term average, according to the report. Four alternatives were studied that varied in the amount of carryover storage, the beneficiaries identified, how the new supply is routed, and the type of intake structure. The dam’s benefits include water supply reliability benefits for both agricultural and urban water users, emergency water supply benefits and increase flood protection, as well as hydropower and recreation benefits.  Ecosystem benefits include a larger cold water pool, increased flows for restoration, and potential benefits for spring-run Chinook salmon.

“Today’s release of the Upper San Joaquin River Basin Storage Investigation Draft Feasibility Report is a vital step to building drought resilience in California,” said Regional Director David Murillo in the press release. “The unprecedented drought conditions that we are currently facing firmly reinforce the need to investigate projects like this one to help meet the challenges of lean water years.”

The Bureau of Reclamation is seeking public comment on the draft report.  Comments on the report are due by April 21, 2014.