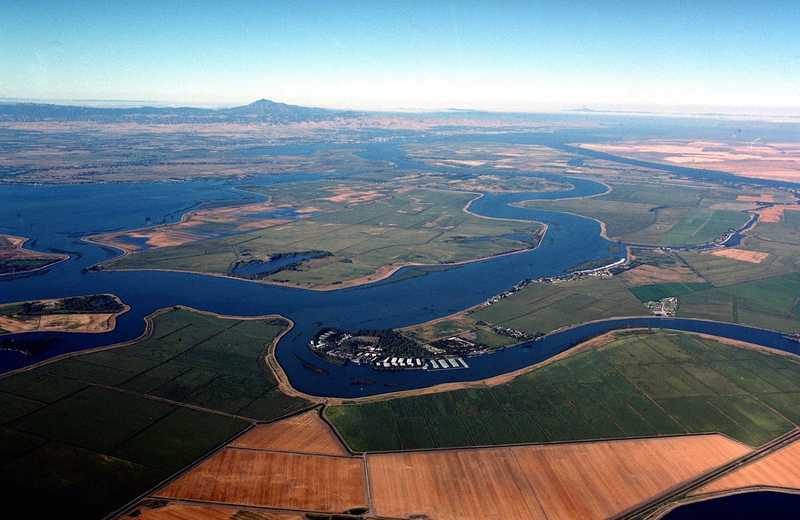 One of the statutory responsibilities of the Delta Watermaster is to present reports to the State Water Resources Control Board and the Delta Stewardship Council on various water resource issues.  On October 8th, Delta Watermaster Craig Wilson presented his eighth report to the Board titled “California’s Area of Origin Laws”.

Mr. Wilson began by saying that he’d heard Area of Origin laws described as sort of a ‘sleeping giant’ of California water right laws.  There haven’t been a lot of articles written about them, and most of the articles that have been written about them are in law review articles and full of legalese, he said.

“I think it’s time to have a reminder and try to put the whole idea in perspective because it does have the potential to really dramatically affect California’s water future,” he said.  “There have been several recent court cases that discuss the Area of Origin laws and various ramifications, so I thought it was useful to go through those cases to try and distill some general principles out of them and present them in plain English format so people could wipe away the mystery that surround some of these laws.  I think as water supplies are stretched even more thinly into the future and climate change and water demands of the north increase, I think the area of origin laws will become much more relevant to California’s water future.”

Mr. Wilson said there were three Area of Origin laws that are significant: the County of Origin law which was passed in 1931, the Watershed Protection Statute which followed in 1933, and the Delta Protection Act which was passed in 1959.  These laws were meant to reassure Northern California water interests that as the various portions of major water export projects were developed, their water interests would be protected, he explained.  “The Owens Valley issue was fresh on everyone’s minds so that was one of the major reasons and part of the compromise to get some of the authorization for these major export projects through; Northern California wanted some of these reassurances.”

The County of Origin law was enacted in 1931 in response to a law that had been passed a few years earlier that reserved to the government unappropriated water for development of the projects; the Watershed Protection Statute was passed as part of the state’s Central Valley Project Act; and in 1959, the Delta Protection Act was tied to protection to the passage of the State Water Project itself.  The common purpose of these laws was to assure the areas where water originates that they would have adequate water supply for present and future needs; they were not intended to preclude export of water to other areas before those needs arise but instead, the needs of the area of origin would take priority if and when they arose, Mr. Wilson explained.

There are two attorney general opinions written in the 1950s that are still relevant, Mr. Wilson said, but his report focuses on the recent court cases, four of which have occurred since 2006.  “While all of the cases and the specific case in the matter before them denied the Area of Origin claims, I think the cases themselves broadly interpreted the protections.”

[pullquote align=”left|center|right” textalign=”left|center|right” width=”30%”]“I think in the future these laws could really come into play especially with climate change and the change in some of the patterns of natural runoff and flow where people in the north may be trying to seek the protection of the area of origin laws to a greater extent than has happened in the past.”[/pullquote]

“The conclusions in the report are basically my view of things and there might be some disagreements on some of the issues,” said Mr. Wilson.  “I think the intent of the law is very clear, it’s to provide some measure of protection to the areas of origin.  All the laws are written very generally and that’s why these more recent court opinions are very important in understanding what they mean.  While the recent cases rejected the Area of Origin claim, they established some pretty broad principles and I think they established some of the outer boundaries.”

“When you are talking about stored water, my opinion is that the area of origin of inhabitants have a right to purchase stored waters from the projects, but the receipt of that water would be subject to the terms of the parties contracts,” he said, noting that this is an issue where there is some disagreement.  “My reading of the case was that the federal government as well as the state government would be required to sell water if people asked for it, but there is probably some disagreement on that, and also the issue of whether the contracts would be subject to water restrictions.”

He added that the Area of Origin laws do not entitle valid water right holders to divert water that’s been previously stored upstream and released for downstream rediversion or instream beneficial use; it is basically protection for natural flows in the system.

Mr. Wilson concluded by saying that he reviewed the recent court cases to distill some of the general principles and articulate them clearly and in plain English in the report.  “I think in the future these laws could really come into play especially with climate change and the change in some of the patterns of natural runoff and flow where people in the north may be trying to seek the protection of the area of origin laws to a greater extent than has happened in the past.”

During the public comment, a lawyer representing Westlands Water District and the San Luis Delta Mendota Water Authority disputed some of the findings and conclusions in the report.  Click here to listen to his comments:

To read the Delta Watermaster’s report on Area of Origin laws, click here.