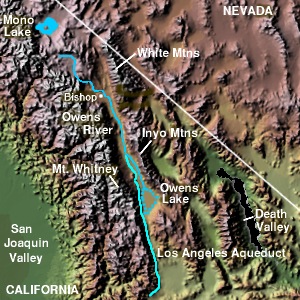 The Los Angeles Aqueduct System is California’s very first water conveyance system, completed in 1913 to slake the thirst of the growing city. At the time of its completion, it was considered to be a great engineering feat, second only to the Panama Canal.  The Los Angeles Aqueduct is owned and operated by the City of Los Angeles and the Department of Water and Power (DWP), and supplies water solely for use within the city limits.

The arrival of Owens River 233 miles to the south was greeted with great enthusiasm in the growing city in the fall of 1913, but it would soon prove not to be enough.  After tapping the Colorado River in the 1930s, the city turned its eyes to the north, completing the Mono Basin extension in 1940 bringing the total length of the system to 338 miles.  In 1970, the Second Los Angeles Aqueduct was completed from the Owens Valley to the San Fernando Valley, roughly paralleling the path of the first aqueduct and adding additional conveyance capacity to the system.

The waters of the Owens River nourished the growth and prosperity of Los Angeles, which in turn, fed the growth of the entire Southern California region.  After the aqueduct was completed in the early 1900s, residents from the Midwest and the East Coast flocked to Los Angeles, and in 1915, the San Fernando Valley joined the city, doubling its size.  Other suburbs would soon join as well,expanding the city to nearly 500 square miles.

However, at the top of the aqueduct in the Owens Valley, it was a much different story.  As the water was siphoned away, farms disappeared and towns became deserted. The Lower Owens River was completely dried up below the intake to the aqueduct.  Deprived of its inflow, the Owens Lake soon dried up as well, becoming a source of toxic dust clouds visible for miles when the high winds would blow.  After completion of the Second Los Angeles Aqueduct, the city drilled wells and began exporting groundwater, too, drying up natural springs and vegetation and turning parts of the valley floor into a desert.

Environmental mitigation for the damage done has been pursued and litigated through the courts for decades.  Currently, the Department of Water and Power is under a court mandate to keep water in the Lower Owens River and to provide dust control on the dried Owens Lake bed.  Furthermore, the Department of Water and Power diversions of water from the Mono Lake Basin are limited until the level of Mono Lake reaches the mandated elevation of 6392 feet above sea level.  Those diversions won’t be increasing any time soon; In 2014, the level of the lake was only at 6380 feet.

There are those that say that the city of Los Angeles stole the water from the Owens Valley, and whether or not this is true remains a subject of debate; the hard feelings and difficult relations between the residents and the city to some extent remains even today.  Others say that as the main landowner in the Owens Valley, the Department of Water and Power’s land management policies have discouraged extensive urban development, sparing it from the ills associated with increased urbanization.

To date, Inyo and Mono counties remain some of the least populated in the state, with outdoor recreation such as fishing, hunting, camping, and hiking being the main economic driver of the region.

For more on the Los Angeles Aqueduct …

I have extensively photographed the Los Angeles Aqueduct and the Owens Lake Dust Control Project.  Below is a list of photo essays that are posted on my photoblog:

Note: The diagrams and historical photos in the gallery are all public domain so feel free to right-click and download.

This page was written by Chris “Maven” Austin and published on July 5, 2015.