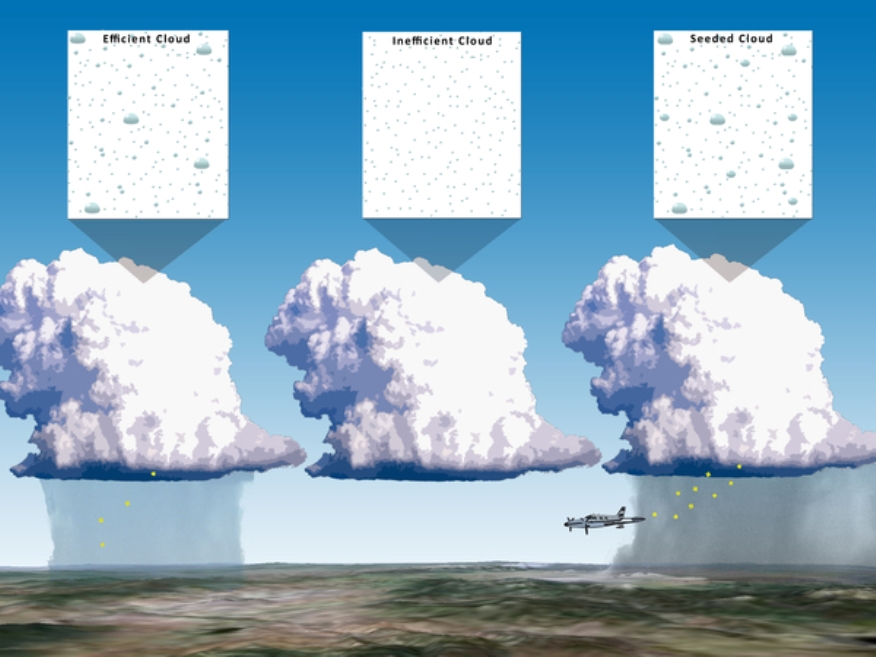 Precipitation enhancement, or cloud seeding, involves artificially stimulating clouds to produce more rain or snow than they would otherwise by injecting the clouds with substances that allow the raindrops or snowflakes to form more easily.

Winter cloud seeding has been practiced in California since the early 1950s mostly in the Sierra with the intention of increasing water supply and/or hydroelectric power.  Cloud seeding can be done from the ground or from aircraft.  Silver iodide is used for the active seeding agent, supplemented by dry ice if aerial seeding is done.

However, cloud seeding projects are not a remedy for drought as cloud-seeding opportunities are far fewer in drought years.  Conversely, in very wet years, cloud seeding activities are suspended. 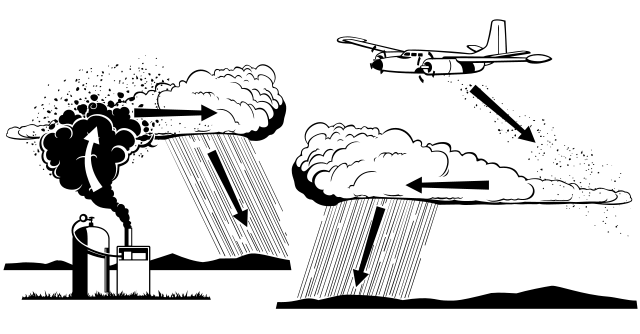 BUT DOES IT WORK?

Statements by the American Meteorological Society in 1998 and by the World Meteorological Organization in 2007 have supported the effectiveness of winter cloud seeding projects while acknowledging that much uncertainty exists due to the high background variability in weather.

Studies that have been done over the years tend to support its effectiveness, estimating the increase in annual precipitation ranging from 2 to 15%.  However, additional research of weather modification is needed and funding for such studies is always a challenge.

An estimate prepared for the 2013 update of the California Water Plan by DWR staff estimated that the combined precipitation enhancement projects on average currently generate about 400,000 acre-feet of runoff annually, or about a 4% increase in runoff.

POTENTIAL FOR EXPANDING PROGRAMS IN CALIFORNIA

It has been estimated that an additional 400,000 acre-feet of runoff could be generated by expanding programs to basins not currently being seeded.  Due to the more frequent storms and cooler temperatures, most of these opportunities exist in Northern California, particularly within the Sacramento River basins in watersheds that are not being seeded now.  With the exception of the Upper Trinity River basin, there is little potential in the northern coastal region due to limited storage capacity.

Another potential area of interest to California is wintertime cloud seeding to augment Colorado River supplies, a key source of imported water for Southern California.  There are currently 15 programs in operation; there may be potential for up to 15 additional programs, particularly in the headwater states of Colorado, Utah, and Wyoming.  A 2006 study estimated the combined yield of those projects could be as much as 800,000 acre-feet on average.

HOW MUCH WOULD IT COST?

To date, there has been no complete and rigorous study of current cloud seeding projects in California, although some studies of individual projects in the past years have shown increases in runoff.

It is difficult to target the seeding materials to the right place in the clouds at the right time, and there’s incomplete understanding of how effective the operators are in their targeting practices.

Enhancing the precipitation of one region at the expense of those downwind.  The available evidence does not show that seeding clouds with silver iodide decreases precipitation downwind; in fact, the increase in precipitation may extend as far as 100 miles downwind.

Concerns over long-term use of silver iodide.  The potential toxic effects of silver has not been shown to be a problem.  Silver and silver compounds have a relatively low rate of toxicity, and watershed concentrations would be extremely low because small amounts of silver iodide are used.