Mercury contamination is a widespread problem, not just locally but also globally, and its serious effects on health are well known.  Mercury is particularly insidious as it can be a threat to people and wildlife even in areas that don’t look obviously polluted.  Across the country, forty-two states have issued fish consumption warnings due to mercury, and the reducing global mercury emissions has even been the subject of international talks.

There are many sources of mercury to the environment, both natural and manmade.  Natural sources include volcanoes, naturally-occurring mercury deposits; manmade sources include atmospheric deposition from power plant emissions, urban and industrial wastewater discharges.

Mercury comes from many sources: it is transported by wind and rain from local and global emission sources, it can be present in urban and industrial wastewater, and it can be naturally occurring in soils and springs, particularly in the Coast Range.  In many areas of California, it is a legacy contaminant from gold rush mining, as abandoned mines are still leaching significant amounts of mercury into the environment.

Most of these sources provide mercury in a non-toxic inorganic form, but when the mercury reaches a wetted environment, such as a wetland or reservoir, it settles to the bottom where bacteria in the sediments convert it to the more toxic, organic form called methylmercury.  The rate of methylmercury production varies by habitat and is affected by water chemistry factors, such as oxygenation and carbon availability.  Some of the methylmercury will be lost through degradation by sunlight or other bacteria, and some of it will move up the food chain.

Methylmercury is bioaccumulative pollutant which concentrates as it moves up the food chain, from algae to zooplankton to prey fish and the predators that eat them, such as trout and bass.  The single largest increase in methylmercury concentration is in the algae where concentrations can be 100,000 times greater than in the water itself.

Most humans are exposed to harmful amounts of mercury through eating contaminated fish and shellfish. Possible symptoms of methylmercury poisoning may include loss of peripheral vision, “pins and needles” feelings, usually in the hands, feet, and around the mouth; lack of coordination of movements; impairment of speech, hearing, walking; and muscle weakness.

Toxic levels of mercury have been found to be present in more than 180 reservoirs and rivers in the state, making some of the fish unsafe for human or wildlife consumption.  Many of these water bodies have signs posted advising people to limit their consumption of certain species of fish.

Here in California, many of the state’s streams, rivers, and reservoirs are impaired for mercury, much of it a legacy from the Gold Rush days when mercury was mined in the Coast Range and transported to the Sierras for use in gold mining.   Estimates are that 26 million pounds of mercury was used for gold mining operations in Northern California, most of that in the Sierra Nevada and Klamath-Trinity mountain areas.

Gold-rush miners sought gold by eroding entire hillsides with high-pressure water cannons in a practice known as hydraulic mining; the sediment was then run through sluice boxes, where mercury was added to bind to gold.  Through this process, large quantities of the heavy metal made their way into sediment downstream, filling the rivers and streams with contaminated sediment and causing flooding in the Central Valley.  In 1884, the courts banned hydraulic mining, but the damage had already been done. 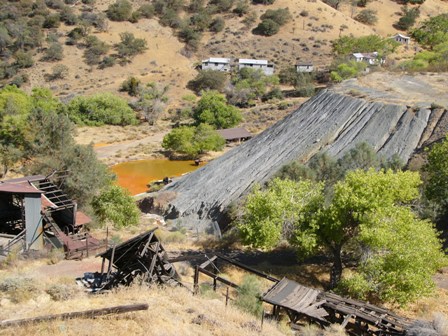 Many abandoned gold and mercury mines have never been adequately cleaned up, and they continue to produce toxic runoff today.   The American, Bear, Feather and Yuba Rivers, which join the Sacramento River to flow into the San Francisco Bay, are the four most mercury-contaminated rivers in the state, and as a result, mercury is found throughout the San Francisco Bay-Delta estuary and its watershed at elevated concentrations in the sediments and biota.

A study published in 2013 found there is enough mercury-contaminated sediment upstream to significantly add to the levels mercury downriver and in the San Francisco Bay for the next 10,000 years.

WHAT CAN BE DONE

As large as the problem is, there are significant efforts here in California and elsewhere to address the problem.  Some of the techniques include dredging and pumping of contaminated soils, chemical treatments with other compounds to make it biologically unavailable, physical barriers to contain it so it no longer spreads, using microbes to demethylate the methylmercury to a less toxic form, using plants to remove or immobilize it, and manipulating water quality parameters such as oxygen or pH to ensure that methylmercury production will not occur.

HOW CALIFORNIA IS ADDRESSING THE PROBLEM

The State Water Resources Control Board along with the regional water boards have been working to address the issue by setting TMDLs for individual water bodies, developing a statewide control program for mercury-impaired reservoirs, and developing fish-tissue objectives to protect human health and wildlife.

The mercury contamination in California is widespread; while some water bodies have already been addressed by TMDLs, there are many water bodies statewide, including reservoirs, that are impaired and awaiting TMDLs. 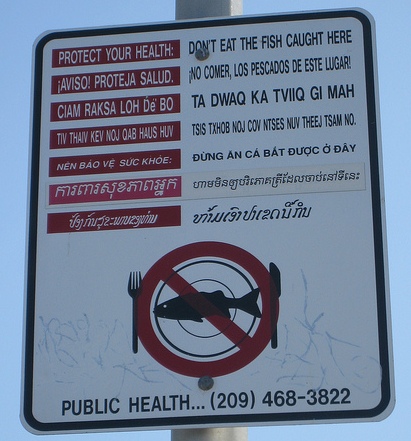 Recognizing that it’s going to take decades or more to reduce mercury levels in fish, in 2005 the State Water Board directed the San Francisco Bay and Central Valley regional water boards to address the public health impacts by conducting public outreach (or “exposure reduction activities”) to protect people who eat locally caught fish.  These public outreach programs were built into the mercury TMDLs for the SF Bay and the Delta.

The goal of the program is to protect fish consumers from the harmful effects of contaminants; while the public outreach programs address mercury, they also address PCBs in fish where they are found.

From the water boards:

For coverage of methylmercury issues on Maven’s Notebook:

Click here for all coverage of methylmercury issues on Maven’s Notebook.