Cleaning up polluted groundwater basins can create additional water supply that would not otherwise be available without remediation, but treatment costs can be expensive.

Throughout California, contaminants such as arsenic, nitrates and naturally occurring radioactivity have reduced the amount of drinking water available from aquifers and groundwater basins. Data from the State Water Resources Control Board shows that nearly 300 different California water systems currently contain levels of contaminants so high that they violate safe drinking water standards. 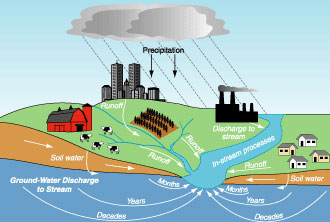 Contaminants in groundwater come from many sources. Some, like arsenic and uranium, occur naturally. Others, like nitrates, industrial and commercial solvents, and pesticides, are the result of human activity. The U.S. Environmental Protection Agency has a list of contaminants and the possible health effects associated with long-term exposure.

Groundwater is an important water resource in California. California’s groundwater provides approximately 30 to 46 percent of California’s total water supply, depending on local rainfall, and serves as a critical buffer against drought and climate change. Some communities in California are completely reliant upon groundwater for urban and agricultural use.

The California Water Plan states that there are approximately 16,000 sites in the state where groundwater contamination is either being investigated or treated. In general, groundwater remediation is done either in situ, or in the aquifer; or ex situ, where water is pumped out and treated. In situ methods can be passive, allowing contaminants to degrade biologically or chemically, or to disperse over time. More active in situ methods generally involve injecting chemicals into the aquifer to remove contaminants chemically or biologically.

Approximately 800 sites in California use pump and treat systems that decontaminate water through physical, chemical or biological methods.

Most of these ex situ systems are located at sites where industrial or commercial solvents have gotten into the groundwater. These solvents, such as trichloroethylene (TCE) and perchloroethylene (PCE), have multiple uses, including dry cleaning of clothing and degreasing of manufacturing equipment. Accidental spills, routine cleaning of machinery and chemical storage tanks, leaks in industrial waste pits and landfills, and other human activities have released these chemicals into the soil and groundwater over many years. Active groundwater remediation systems extract, treat, and discharge the treated groundwater to a river, the ocean or other water body, or inject it back into the aquifer.

In Los Angeles, more than 30 square miles of the San Gabriel Valley have been designated as a federal Superfund site due to commercial and industrial discharges contaminating groundwater. TCE and PCE are being removed from the San Gabriel basin aquifer, which supplies more than 90 percent of the water for the valley.

A TOUGH PROBLEM TO SOLVE

Efforts to clean up contaminated groundwater throughout the state face major implementation issues. The first of these challenges is water quality. The type and extent of contamination vary from aquifer to aquifer, and groundwater in historically commercial, agricultural or industrial areas may contain a variety of regulated and unregulated contaminants. Contaminants of emerging concern include chemicals such as prescription drugs, soaps and disinfectants that are present in the environment but for which the risk to human health is not yet understood.

Another challenge is the difficulty in understanding the hydrogeology of groundwater basins and aquifers. Aquifers are formed as water flows through the pores and fractures of sand, gravel, clay, and solid rock beneath the earth’s surface. Each aquifer has unique characteristics that make it difficult to predict the flow of water and other liquids, such as contaminants, through the subsurface. State programs such as the Groundwater Ambient Monitoring and Assessment Program (GAMA), GeoTracker-GAMA (groundwater information system), and California Statewide Groundwater Elevation Monitoring (CASGEM) have improved the understanding of groundwater conditions in the state, but much more data is needed.

Climate change adds uncertainty to the issue of groundwater contamination. Increased groundwater pumping is expected in the future, as the state may experience reduced surface water flows in summer months. Winter snows are expected to become winter rains instead. This means that water that once was stored as part of mountain snowpack and distributed via snow melt in the spring and summer will now come all at once during winter. Another concern is that rising sea levels may worsen salt water intrusion into groundwater basins, requiring further treatment to remove salts.

Cost is a significant impediment to cleaning up contaminated groundwater or aquifers. Investigating sites for contaminants is costly, as is groundwater treatment, which can take decades to resolve. While some federal and state funding is available for certain types of cleanups, more often funding for remediation is covered by those responsible for the contamination, or those willing to do the cleanup, such as city and county agencies, water purveyors and their customers. In urban areas, it is often difficult to assign responsibility for the legacy of many years of discharges of contaminants from different sources.

Based on cost data from the State Water Resources Control Board and the California Department of Public Health, Division of Drinking Water and Environmental Management, total groundwater remediation costs in California, excluding costs of salt management, could approach $20 billion during the next 25 years. The estimate is based on current costs for remediation, estimated future costs for similar remediation, newly discovered contamination, and emerging contaminants.

Owners of underground storage tanks (UST) containing petroleum have been able to apply for funding to clean up leaking tanks from the state’s Underground Storage Tank Cleanup Fund since its establishment by the Legislature in 1989. The fund disburses about $200 million annually to eligible claimants. In the 1990s, the cost to clean up an individual UST site typically ranged from $100,000 to $200,000. The cleanup of sites contaminated with MTBE costs significantly more, with reimbursements as high as the fund’s limit of $1.5 million per site. Since June 2011, the fund disbursed more than $3.1 billion to eligible claimants.

Prevention of future contamination is key to controlling water treatment costs and ensuring that groundwater supplies can be used for drinking water. Informing people why source water protection and pollution prevention measures are important and necessary may be key to protect groundwater sources and help reduce future cleanup costs. More public education and outreach can help people make educated choices and take appropriate action when their activities may degrade water quality. When groundwater resources are not protected and become impacted by pollution, a community’s drinking water supply could require treatment not previously needed, increasing cost to rate payers.

Download the resource management for groundwater/aquifer remediation by clicking here.

Agencies and organizations working in this area …