The Bay Delta Water Quality Control Plan sets the water quality objectives meant to protect beneficial uses as well as the Delta’s ecosystem.  The plan, last updated in 2006, is currently undergoing major revisions.  Here’s a guide to the process underway at the State Water Board.

The Bay Delta Plan was last updated in 2006. Click on the document to read.

The Sacramento-San Joaquin Delta watershed covers more than 75,000 square miles, extending nearly 500 miles from the Cascade Range in the north to the Tehachapi Mountains in the south, bounded by the Sierra Nevada Mountains to the east and the Coast Range to the west. Nearly half of the water flowing in the state’s rivers and streams starts as rain or snow that falls within the watershed and flows downstream through the Delta.  The Delta watershed is home to the largest estuary on the west coasts of the Americas, as well as the providing the primary source of drinking water for 25 million Californians and irrigation for millions of acres of farmland.

In recent years, declining water quality, plummeting populations of native fish, and increasing demand for limited water resources have been at the heart of several state agency planning processes, one of those being the State Water Resources Control Board’s Bay-Delta Plan.

The ‘San Francisco Bay/Sacramento-San Joaquin Delta Estuary Water Quality Control Plan,’ blessedly known as ‘Bay Delta Plan’ for short, identifies existing and potential beneficial uses of water and then establishes water quality objectives to protect those uses.  The State Water Board is the agency responsible for developing and modifying the Bay Delta Plan under the authority of the Federal Clean Water Act and the state’s Porter-Cologne Water Quality Control Act. Usually water quality control planning is generally done by the regional water boards; however, the State Water Board develops and adopts the Bay Delta Plan due to the importance of the Delta as a major source of water supply for the state. 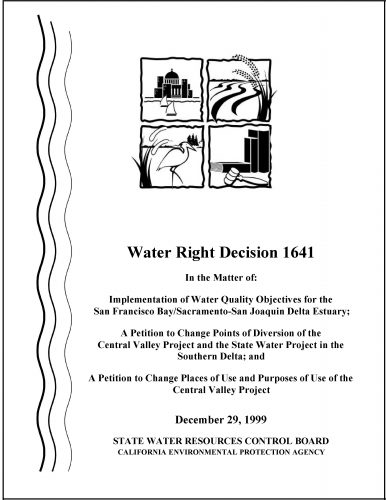 The Bay Delta Plan is implemented through Water Right Decision 1641. Click on the document to read.

The first Bay Delta Plan was developed by the State Water Board in 1978, and was subsequently updated in 1991, 1995, and 2006. The plans have generally required the State Water Project and the Central Valley Project to meet certain water quality and flow objectives in the Delta to maintain desired salinity levels for in-Delta diversions and to maintain fish and wildlife, among other things.  Implementation of these objectives has often affected the amount of water available to be exported, thus at times resulting in reduced Delta exports to water users south of the Delta.

The State Water Board is a bit behind in the updating process.  Under the Clean Water Act, water quality control plans are to be updated every three years; however,  the current update began in 2009 and is not expected to be completed before 2021 – at the earliest.

This update of the Bay-Delta Plan is focusing on evaluating the impact of insufficient freshwater flows as numerous scientific documents have identified flow as a major factor affecting fisheries and other public trust uses of the waters of the Delta.  Given that the State Water Board stated in a 2010 report, (pg. 15) “the best available science suggests that current flows are insufficient to protect public trust resources,” it is widely expected that the water board will adopt flow objectives that will require increased freshwater flows through the Delta.

At the center of the Bay-Delta Water Quality Control Plan: setting objectives

In determining water quality and flow objectives, the Board is required by law to balance the competing uses of water to protect public trust uses, including fish and wildlife, while also considering the public interest in drinking water, hydropower, agriculture and other beneficial uses. The State Water Board then determines how to achieve those objectives, usually by setting conditions on water right permits or licenses, or through actions such as regulation of discharges of pollutants or projects that manage agricultural drainage.

The Bay-Delta Plan sets specific objectives for constituents, such as salinity or dissolved oxygen; inflows to the Delta from the Sacramento and San Joaquin rivers as well as for Delta outflow into the San Francisco Bay; and limits on the amount of water that is exported from the Delta.

The review, development, and adoption of water quality and flow objectives require public participation, as well as consideration of alternatives and preparation of environmental documents in accordance with CEQA.

Going with the flow …

There has been a dramatic decline in populations of native fish species that migrate through and inhabit the Delta, pushing some species to the brink of extinction. While multiple stressors have contributed to the decline, the magnitude of diversions out of the Sacramento, San Joaquin, and other rivers feeding into the Bay-Delta is one of the major reasons for the ecosystem decline.

Flow influences nearly every feature of habitat that impacts fish and other wildlife, including water temperature, water chemistry, and the availability of physical habitat. These features, in turn, affect the risk of disease and predation, reproductive success, growth, migration, and feeding behavior of native fish.  However, increasing flow objectives and requiring more water to remain instream reduces the surface water available for human uses, especially during drier years.  The reduced water supply would primarily affect agriculture, but would also affect drinking water supplies and hydropower generation.

Nonetheless, flow criteria is just one factor that the State Water Board will take into consideration when setting flow objectives as the Board is required by law to consider and balance all the beneficial uses, which include not only the protection of fish and wildlife, but also all other beneficial uses, such as municipal and agricultural water use, hydropower, and recreational uses.

The Delta Reform Act of 2009 directed the State Water Resources Control Board to develop new flow criteria for the Delta’s ecosystem necessary to protect public trust resources in order to better inform planning decisions for the Bay Delta Plan update, as well other State Water Board’s processes.  In August of 2010, the State Water Board adopted the report, Final Report on the Flow Criteria for the Sacramento-San Joaquin Delta Ecosystem, which specified the volume, quality, and timing of water necessary for the Delta under different hydrologic conditions that would be needed solely to protect fish and wildlife.  It is important to note that the report did not consider competing uses of water, such as hydropower, municipal uses, and agricultural supply.

The State Water Board is currently in the process of developing and implementing updates to the Bay Delta Plan in two distinct phases, a project that began over ten years ago in 2009.  The first phase was completed in 2018 and established flow objectives for the Lower San Joaquin River and its tributaries, and revised southern Delta salinity objectives.  The second phase, still in progress, will consider objectives for the Sacramento River and its tributaries, Delta eastside tributaries, Delta outflows, and interior Delta flows.

After nine years of studies and public outreach, in December of 2018, the State Water Resources Control Board adopted new flow objectives for the Lower San Joaquin River and its three tributaries, the Stanislaus, Tuolumne, and Merced Rivers.  Prior to the Board’s action, the flows remaining in the San Joaquin River and its three tributaries sometimes ran as low as 6 percent in dry or drought years, while they averaged 10 to 20 percent of unimpaired flow at critical times of the year, ranging from 21 to 40 percent on average.  The final Lower San Joaquin River/Southern Delta update included increased instream flows February through June, the critical months for migrating fish; the flows are measured as a percentage of “unimpaired flow,” which is defined as the amount of water moving down river if there were no dams or other diversions.  The Board also revised the salinity standard for the southern Delta, increasing slightly from prior seasonal standards.

On February 25, 2019, the Office of Administrative Law approved the Bay-Delta Plan amendments, which are now in effect.

To access all the documents for the lower San Joaquin River and Southern Delta salinity objectives, click here.

PHASE 2: Changes to the Sacramento River and Delta objectives

On July 6, 2018, the State Water Board released a framework document for the update for the Sacramento River and the Delta which outlined how the State Water Board intends that each watershed in the Delta’s watershed would share in the responsibility for protecting fish and wildlife for the betterment of the entire Bay and Delta ecosystem.  Key provisions described in the framework include a proposed new tributary inflow objective that ranges from 45 to 65% of unimpaired flow, a new narrative cold water habitat objective, a new outflow objective for the Delta, and updated requirements governing how water circulates within the Delta itself.  Click here to read the framework.

However, the controversy is not over …

Reclamation and its contractors would likely play key roles in implementing any update to the Bay-Delta Plan, as they do in implementing the current plan under D-1641. In the past, Reclamation has deferred to state water law in carrying out its authorities, but the proposed Bay Delta Plan Update has generated controversy.

In a July 2018 letter to the State Water Board, the Commissioner of Reclamation opposed the proposed standards for the San Joaquin River, arguing that meeting them would necessitate decreased water in storage at New Melones Reservoir and that such a change would be contrary to the Central Valley Project purposes as established by Congress.  She threatened legal action and did so – on March 28, 2019, the Department of Justice and the Department of Interior filed civil actions in federal and state court against the State Water Board for failing to comply with the California Environmental Quality Act.

The State Water Board has repeatedly communicated that voluntary agreements can provide a faster, more durable solution to reasonably protect beneficial uses in the Delta.

The current voluntary agreement proposal includes 800,000-900,000 acre feet of new flows for the environment above existing conditions in dry, below normal and above normal water year types, and several hundred thousand acre feet in critical and wet years to help recover fish populations; provides for 60,000 acres of new and restored habitat; generates over $5 billion in new funding by establishing a surcharge per acre-foot of water diverted from the Delta; enables a new, collaborative science hub for monitoring and experimentation, expands tools to recover fish populations; and expedites implementation.

If successful, these agreements hold the potential to help recover native fish populations more quickly and holistically than regulatory requirements, and with less negative social and economic impacts; if not, litigation will surely ensue and complicate any attempts to improve conditions, for years if not a decade or more.

Click here for all posts on the Bay-Delta Plan from Maven’s Notebook.