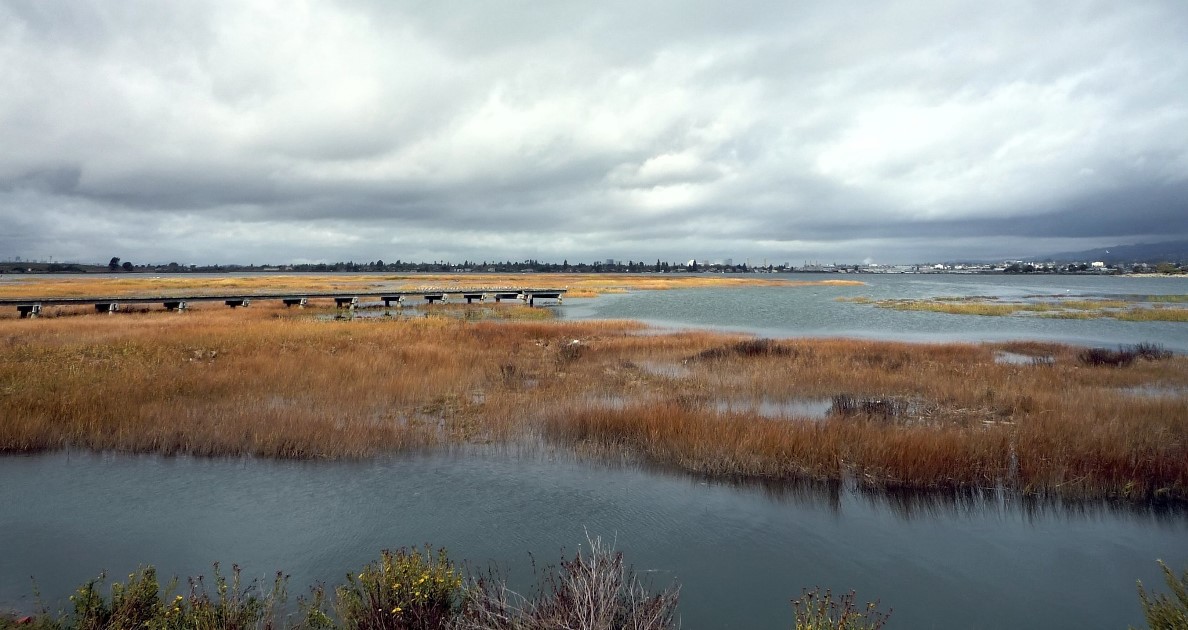 With One Threat Nearly Tamed, a Related Question: What Does the Bay Most Need to Be Saved From?

If you look up the Arrowhead Marsh along the Oakland shoreline on Google Maps, the arrowhead shape is striking. If you look closer, you see that the eastern half of the marsh is noticeably darker in color than the western half; there seems to be an imaginary line bisecting the marsh, and there might as well be.

In the 1970s, the Army Corps of Engineers introduced a species of Atlantic cordgrass from the East Coast, called Spartina Alterniflora, to the Alameda shoreline. The East Coast Spartina interbred with the native species of Pacific cordgrass, Spartina foliosa, spawning the hybrid Spartina alterniflora x foliosa. The hybrid species – and its further hybridized forms — reproduced at a much faster rate than the native Spartina foliosa and in the ensuing decades spread across Bay Area marshes, including Arrowhead.

As it spread, the non-native Spartina drastically altered tidal marshes to the detriment of the wildlife they support. It grew across once-open mudflats, which are important foraging habitat for shorebirds. It edged out Spartina foliosa and other native plants like pickleweed, which are crucial for the endangered salt marsh harvest mouse.

Now at the CA Water Library …

New on the Notebook …

DAILY DIGEST, 12/2: State kicks off water year with anticipated 5% allocation; Another storm this weekend; If you build it, do they come? Measuring results of the Water Forum’s habitat projects on the Lower American River; What’s next for Cal Am’s desalination plant?; and more …

DAILY DIGEST, 11/30: Nearly 20% of CA water agencies could see shortages if drought persists; Why are water thieves so hard to catch?, Rain, snow set for Thursday; Kings County passes law to prevent groundwater movement out of the county; and more …

WEEKLY WATER NEWS DIGEST for Nov. 28-Dec. 2: Kamyar Guivetchi on managing water resources for sustainability & resilience; State kicks off water year with anticipated 5% allocation; Water thieves abound in dry California. Why are they so hard to catch?; and more …

NOTICE: Temporary Suspension of Some Curtailments in the Delta Watershed

Type to search or hit ESC to close
See all results