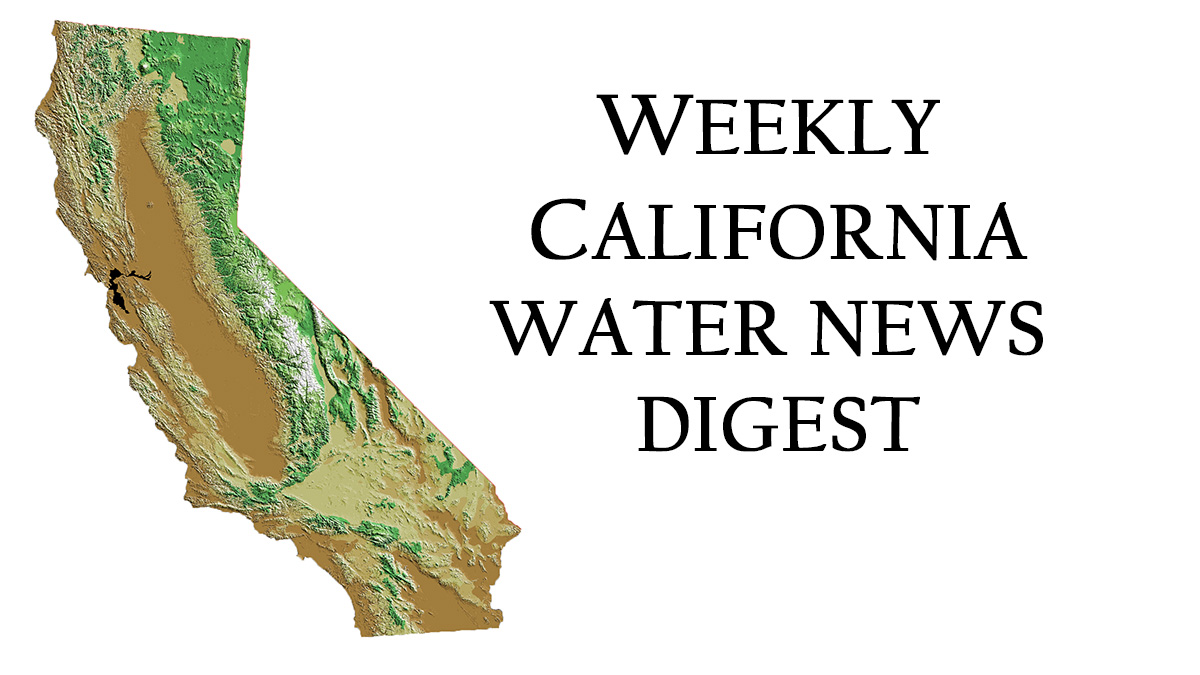 At the November meeting of the California Water Commission, Commissioners were briefed on subsidence issues with the California Aqueduct and current construction and maintenance projects underway for the State Water Project.

In California water news this week …

“Across California, city and county officials are finding dangerous chemicals in their drinking water wells. The chemicals are known as PFAs, which have been used for decades in non-stick pan coatings, food packaging, and the foam firefighters use to extinguish blazes. Nearly everyone has been exposed to PFAs in some form.  “They [PFAs] can build up in the body over time. And they’ve been linked to … both kidney and testicular cancer, thyroid disease, high cholesterol,” says Rachel Becker, a reporter for CalMatters with a background in scientific research. … ”  Read more from KCRW here:  New California environmental standards reveal toxins in some water systems

“While Republican members of Congress praised the most recent step toward approving raising the height of Shasta Dam, fishing and environmental groups criticized it as the illegal actions of a “lame duck federal agency.”  The Trump Administration last week issued its final supplemental environmental impact statement on the proposal to raise the height of the dam 18½ feet.  A press release about the action included praise from several GOP members of Congress, including representatives from the San Joaquin Valley. … ”  Read more from the Redding Record Searchlight here: ‘Lame duck:’ Groups bash Trump Administration report on raising the height of Shasta Dam

“It’s probably not the first thing that will come to mind when you think back on this year, but 2020 is now on track to be the second driest calendar year in San Francisco in recorded history — dating back 170 years to 1850.  Water managers track a water year from July to June, so depending on what happens this winter, it might not set any records. It might even end up as an overall wet winter! “You can’t necessarily draw conclusions on November 23,” said National Weather Service meteorologist Ryan Walbrun. “Honestly, it’s too early to kind of throw up the flag or whatever.”  But let’s draw some conclusions! ... ”  Read more from Bay Nature here:  Add “dry” to the list of 2020 descriptors: Will December bring rain?

Westwater Research writes, “Recent trends in the Western U.S. toward high-value and capital-intensive crops that depend on irrigation are changing the importance and value of water in agriculture, and such changes have important implications for water trading and water market prices. WestWater compiled data on agricultural sales and irrigation water use to provide a unique spatial look at the value of water in agricultural use across the Western states.  Please enjoy a short Water Market Insider summarizing the data on agricultural water values, and feel free to take a closer look with our online GIS story-board.”

“Preliminary numbers of fall-run Chinook salmon reported on the Feather, Sacramento, American and Mokelumne rivers are down considerably from last year, although the complete numbers won’t be available from the Department of Fish and Wildlife until next year.  The state’s Feather River Fish Hatchery reported a total of 16,572 fall run adults and 1,490 jacks (2-year-olds) this fall. That’s less than the about 25,000 fish the hatchery saw last year, but the hatchery is still expected to meet its production goal of 6 million smolts (juvenile fish). … ”  Read more from the Stockton Record here: Numbers of fall Chinooks returning to Central Valley rivers are down from last year

“Calling for structural, regulatory changes, farmers and ranchers testified at a state legislative hearing about the impact of wildfires that have become hotter, faster and more destructive.  The sometimes-emotional testimony came during a hearing last week called by Assembly Member Robert Rivas, D-Salinas, who chairs the Assembly Agriculture Committee. At the hearing, farmers and ranchers provided first-person accounts of burned or damaged crops and livestock, lost homes and harrowing details about taking quick action to try to prevent destruction of property. … ”  Read more from Ag Alert here:  Farmers, ranchers seek improved wildfire policies

” … Happy Camp, the capital of the Karuk Tribe with a population of about 1,100, is grieving the loss of two human lives and about 160 homes, including the tribe’s elder housing community. Also lost were cultural materials such as world-class basketry created by now-deceased weavers stored in elders’ homes, regalia used in ceremonies like the World Renewal Ceremony, carefully collected feathers and other items.  But community members also grieve for what they say is the failure of federal and state agencies to accept their deep knowledge and experience in stewarding these lands for more than 10,000 years. … ”  Read more from Arizona Central here: ‘Our right to fire’: Tribes battle agencies, old policies to restore fire practices

In regional water news this week …

“Crews began work this month in the marsh system of Taylor and Tallac creeks in the Southwest portion of the Tahoe Basin to remove aquatic invasive plants from an abundant and impacted marsh ecosystem, the Tahoe Regional Planning Agency (TRPA) announced.  In partnership with the USDA Forest Service Lake Tahoe Basin Management Unit, crews will remove vegetation from the marsh this fall in preparation for the laying of bottom barriers next spring, according to TRPA. Bottom barriers are mats laid underwater to deprive weeds of sunlight they need to grow. Visitors to the area should expect to see field crews at work in and around the marsh with all-terrain vehicles, skiffs, and vegetation management tools. This work is expected to continue as long as the weather allows. … ”  Read more from the Sierra Sun here: Lake Tahoe: Invasive species removal begins in Taylor Creek Marsh

“Voters in Santa Clara County overwhelmingly approved Measure S, making it clear that safe, clean water, natural flood protection and caring for the environment are priorities now and for future generations. The measure needed 66% to pass and has garnered more than 75% of votes in an election that saw a record-setting number of ballots cast.  “I am grateful for the trust voters have shown in Valley Water,” Valley Water Board Chair Nai Hsueh said. “This program was built by the people, for the people. Tens of thousands of residents, community partners and stakeholders told Valley Water what they wanted to see in Measure S. Those priorities will guide us for years to come.” … ”  Read more from Valley Water News here: Santa Clara County voters overwhelmingly approve Measure S, a renewal of the Safe, Clean Water and Natural Flood Protection Program

“A recent exchange of letters between a public utility and a state water authority highlights the continued stalemate in the effort by the Monterey Peninsula to develop a new water supply and end the overdrafting of the Carmel River.  On Oct. 21, California American Water sent a letter to the State Water Resources Control Board to note it had missed a deadline of Sept. 30 to advance construction on a proposed desalination plant just outside the city of Marina. Per a 2016 water board order, the missed deadline carries a penalty, requiring an immediate reduction of 1,000 acre-feet in pumping from the Carmel River.  … ”  Read more from Monterey Weekly here:  State water penalty kicks in as Cal Am misses deadline on desalination plant construction

Fresno County agriculture remains number one in the U.S.

“Things got a little wild at the San Diego County Water Authority meeting last week when its 36 directors argued over whether they should spend more money studying a controversial $5 billion pipeline to the Colorado River.  Outrage after leaders apparently skipped over female directors waiting to add comments during a discussion period sparked some to change their vote on the matter.  “There are three women on the line that are left, and they probably should have been given an opportunity to speak,” said Jim Mosca, a director who represents the San Dieguito Water District. … ”  Read ore from the Voice of San Diego here: San Diego pipeline plan takes a small step forward (with some drama)

San Diego: Another agency wrestles with a weighted voting structure

“How should power over water decisions in San Diego be divided?  Should the city of San Diego, which represents almost 40 percent of the region’s water consumers, have the most sway?  Or should smaller cities be on equal footing when the outcome of a decision could harm towns with less people and money?  That is the question facing San Diego County Water Authority once again, after the latest vote over a $5 billion duplicate pipeline to the Colorado River. … ”  Read more from the Voice of San Diego here: Another agency wrestles with a weighted voting structure

Here’s what the water sector wants from Congress, President-elect Biden

“In a letter to President-elect Joe Biden last week, the American Water Works Association (AWWA) urged the incoming administration to prioritize COVID-19 relief for water utilities and investment for the overall water infrastructure sector.  The letter, authored by association president Melissa Elliott, notes AWWA research that revenue shortfalls at U.S. drinking water utilities may reduce economic activity by $32.7 billion and cost 75,000 to 90,000 private-sector jobs. Drinking water utilities are expected to see revenues from customer payments drop by nearly $14 billion, according to AWWA estimates. This is the result of the elimination of water shutoffs for non-payment, increased late payments due to high unemployment, reductions in non-residential water demands, and the addition of fewer new customers due to economic stagnation. … ”  Read more from Water Finance & Management here:  Here’s what the water sector wants from Congress, President-elect Biden

“Companies whose wastewater pits, oil spills, and other operations accidentally kill more than 1 billion migratory birds a year could avoid fines under regulations the Interior Department is moving to finalize.  The U.S. Fish and Wildlife Service on Friday published its final environmental review for a proposed rule that would codify a 2017 interpretation of the century-old Migratory Bird Treat Act so that only intentional migratory bird killings would result in fines. … ”  Read more from Bloomberg Law here:  Billion birds at risk as U.S. Preps final migratory bird rule

BLOG ROUND-UP: Oroville damages and the State Water Project; Farmers can help with weather whiplash; The Delta as salmon nursery; Dairies and water; and more …