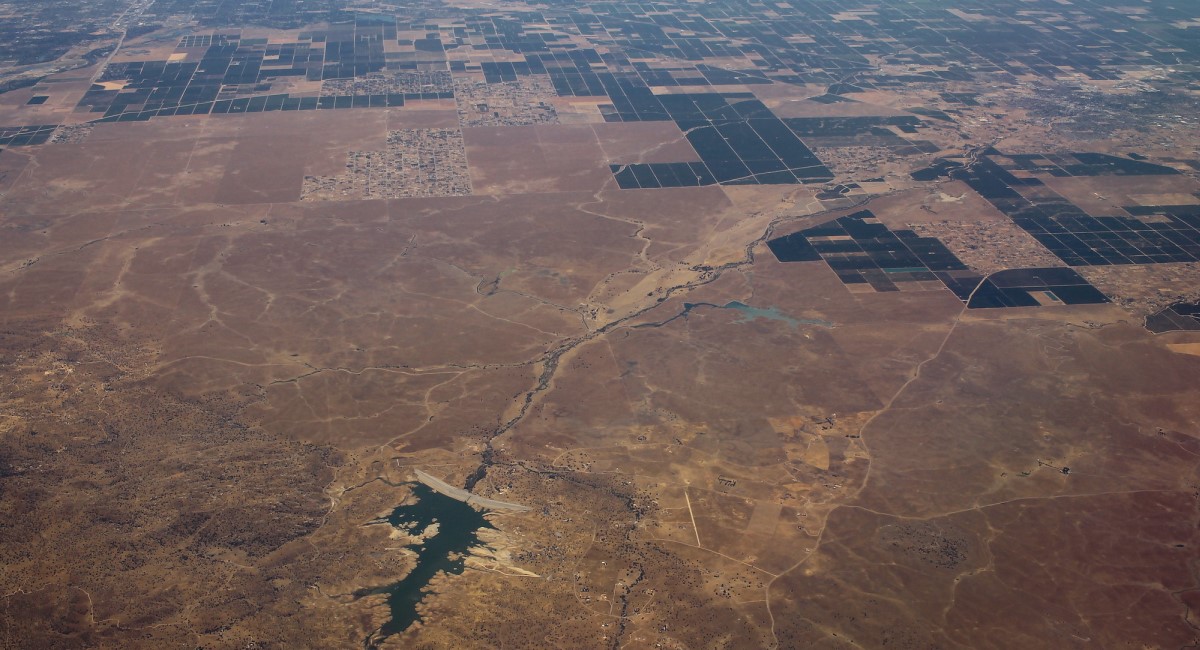 Hidden Dam and the Lower Fresno River, Photo by Formula None

At the October 20 meeting of the State Water Board, one of the agenda items was the consideration of a proposed resolution granting a petition by Madera Irrigation District for the statutory adjudication of water rights in the Fresno River watershed.

Erik Ekdahl, Deputy Director for the Division of Water Rights noted that statutory adjudications are something that the Board or its predecessor have done many times over the last 100 years or so; however, it’s been 40 years since a statutory adjudication has been before the board.  He pointed out that there have been many changes since that time including changes in technological capabilities that make information available more quickly and easily to stakeholders; there are also new offices, such as the Administrative Hearings Office, which could potentially be integrated.

“The process itself will need to be carefully thought out and messaged and made very clear that the process is public and available for people to weigh in throughout the entire process,” said Mr. Ekdahl.

A statutory adjudication is a proceeding by which all the water rights in the stream system are determined through an administrative proceeding conducted by the State Water Board and confirmed by entry of a decree by the Superior Court.  A statutory adjudication can be initiated by a claimant through a petition in the board and the board may either grant or deny the petition after evaluating whether the adjudication will serve the public interest and necessity.

The general process is as follows:

After an extensive noticing period, Board staff conducts a stream investigation which is basically a field investigation of existing uses, and water users submit proofs of claim to the board.  The adjudication also provides an opportunity to evaluate public trust resources and the flows necessary to protect those resources and to meet applicable water quality standards.

A report of the investigation and a preliminary order determining the water rights to the stream system is prepared from the information collected.  Water right claimants will have an opportunity to object to the report and preliminary order and can participate in one or more hearings on objections.

After the hearings have been completed, the Board adopts a final order and following a reconsideration period, the Board then files a copy with the court. The Court may hold its own hearing to hear challenges and finally enters a decree that acts as the final determination of water rights.

There is a fact sheet and more information available at the project’s webpage at the State Water Board.

HISTORY OF THE PETITION

Madera Irrigation District submitted the petition for a statutory adjudication of the Fresno River in October 2018.  The slide shows the map of the Fresno River watershed with the blue outline in the middle being Hidden Dam and the black dots representing the known points of diversion on the mainstem Fresno River and the tributaries.  The estimated 300 water rights claims do not include unexercised riparian claims which will also be included in the adjudication.

At the September 2019 board meeting, the Board adopted a resolution postponing action on the petition and giving the parties an additional 8 months to negotiate an alternative settlement and reduce the need for large scale adjudication.  The resolution outlined eight criteria which the settlement should meet to address the issues raised in the petition as well as seven milestones to assess progress.  Initially, parties were to return to the board in May 2020 to present a proposed settlement and demonstrate progress towards the milestones.  That time frame was later extended to September-October 2020.

The Board’s resolution also directed staff to investigate potential funding for a professional facilitator to aid parties in their negotiations.  In late 2019, the board contracted with Kearns and West, a professional mediation firm, to conduct the facilitation efforts; however, the Board was not a party to those negotiations that occurred in 2019 and 2020.

The State Water Board received the final report on the mediation from Kearns and West in August.  The report described the parties progress on data sharing, identifying conceptual processes and proposals to move forward, but it outlined the lack of consensus by the parties on the best way to move forward as well as other substantive agreements, such as a firm quantification of water rights, water accounting protocols, and water administration terms.  The mediation report noted that the parties met only two of the seven milestones for progress and none of the criteria for a successful settlement.

Parties to the negotiations were given the opportunity to endorse the report, although not all of them chose to do so, and some gave only qualified support based on various concerns.  Those parties that did endorse the final report on the mediation requested six additional months to negotiate, though they recognized that the ultimate resolution of all issues in the Fresno River system would take longer than that.

The Madera Irrigation District, who is the petitioner and the largest water user in the Fresno River system, declined to endorse the report or to continue with negotiations, as they felt the negotiations did not meaningfully address all of the issues that the District raised in its petition for adjudication.  They then renewed their request that the Board conduct the adjudication.

In reviewing the report, Water Board staff acknowledged the progress parties have made in identifying outstanding issues and proposing approaches for cost sharing, hiring of a consultant, and various other efforts.  However, the report identified a number of outstanding issues, such as determinations on the quantity and priority of water rights, as well as terms for water management, water accounting, and water rights administration, that would be best addressed with the involvement of the State Water Board.  As a result, staff feels that further negotiations in the Fresno River system would likely be unproductive without the involvement of the district and further guidance from the State Water Board.

AN ADJUDICATION MUST SERVE THE PUBLIC INTEREST

In evaluating a petition for statutory adjudication, the Board must investigate facts and matters demonstrating that an adjudication would serve the public interest and necessity.

The Code of Regulations lists the criteria that the Board should evaluate:

The first is the degree to which the waters of a system are fully used.  In the Fresno River system, the Board has made several decisions throughout the past that determined that the Fresno River and its tributaries were considered fully appropriated for water right applications between the fall and spring.

The second is the existence of uncertainty about the relative priority of water rights to the system.  In its petition, the Madera Irrigation District raised significant issues over the priority of rights to the Fresno River system, including potentially adjudicated rights, riparian water rights, senior appropriative rights, and the Bureau of Reclamation’s license as well as potential upstream riparian water users and stock ponds.  The final report on mediation continues to acknowledge uncertainties about the relative priorities of these rights, and raises the need for the Board to make a determination on these priorities in order to proceed with the Fresno River system.

The third is the unsuitability of less comprehensive measures such as private agreements of litigation to offer certainty to water right holders in the watershed.  In the Fresno River system, the State Water Board has acted multiple times in the past in the 1970s, the 1990s, and the late 2000s regarding the Bureau of Reclamation’s water right for Hidden Dam.  These Board orders concerned the Bureau of Reclamation’s obligations to certain water users downstream whose riparian water rights were quantified.  However, the Madera Irrigation District’s petition acknowledges that many conflicts still exist with these users and other users that were not previously addressed in the Board’s non-comprehensive measures.  Staff also noted that for the past two years since the petition was received, private settlements and negotiations have not resulted in a meaningful resolution of Fresno River issues.

The fourth is the need for a system-wide decree or watermaster or both in order to ensure efficient and equitable allocation of the waters of the system.  In the Fresno River system, the Madera Irrigation District’s petition states that it has become the de facto watermaster of the Fresno River system as a result of the terms of the Bureau of Reclamation’s license and has significant concerns with the position it is in of having to administer water rights without the legal authority to do so.  Furthermore, the final report on mediation continues to acknowledge issues with the MID’s petition and the lack of an independent third party watermaster which the parties endorsing the report have stated a clear need for.  The Board has also received 32 letters, all of which were supportive of proceeding with adjudication.

So State Water Board staff have concluded that a statutory adjudication of the Fresno River watershed would serve the public interest and necessity based on the assessment of these criteria.

The Board then heard from stakeholders in the region.  Madera Irrigation District representatives believe an adjudication would serve the public interest.  Other stakeholders agree.  No one appears to be objecting to the Board moving forward with the adjudication, and in fact, most seemed to welcome the Board’s involvement to help resolve the issues.

The main issue brought up by the stakeholders speaking on the second panel is the interim management of the river.  Some parties have suggested the Board maintain the status quo, but these stakeholders said this means MID would continue “wielding the water entitlement system for its own benefit and keeping users from receiving entitlements through improper use of protocols”.  Some claim that Madera Irrigation District has been denying riparian and senior water rights.

They are requesting a neutral third party to administer the river system during the adjudication, stating that it is simply not appropriate to maintain the status quo and leave one of the adjudication parties in charge of other water users’ entitlements while engaged in potentially years of adverse proceedings.  They are also asking for a dispute resolution mechanism and interim relief for water entitlement issues during the adjudication, and suggest the new Administrative Hearings Office might be used for hearing those interim decisions.

Board votes to adopt the petition and begin the adjudication, 5-0.

State Water Board staff said they understand the desire for independent management of the river.  They will continue to think over options and see if they can come up with a process that is acceptable to the parties but does not take up too much staff time from the adjudication process itself.  Deputy Director of Water Rights Erik Ekdahl noted that staff will return at a later board meeting with a timeline and deliverables for the adjudication.