GUEST COMMENTARY: Are California’s Water Operations as Efficient as Claimed?

With heavy storms in the forecast, water is released from Folsom Dam as a precautionary measure in December of 2010.

California water users have been consistently frustrated over the seemingly endless water curtailments imposed on them. Over the years, many have speculated on the root causes of these shortages where, everything from a lack of rainfall, to user wastage, to overly generous environmental flow allocations, have been raised. Unfortunately, the messages from the regulators, political leaders, and media are not always consistent and the public is often left uncertain and confused. We wanted to show just how much water can be “lost” by California’s current water system operations.

It all starts with incident precipitation. As the primary driver for water balances, precipitation dictates the potential initial available water. How much of this actually gets translated into “usable” yield is largely a result of man’s efforts (or lack of efforts) to properly manage that quantity. Annual precipitation is key, as it starts the entire process. The 2019 Water Year (WY) so far, has been good. See Table 1, below.

For this current WY, the status of the CVP is that reservoirs today are essentially full, collectively standing at about 10.59 MAF, or 123% of the 15-year average. This late in the season and combined with the current snow water equivalent (SWE) in the Statewide Sierra snowpack at over 30 inches (or 88% above average levels) as of May 1st, confidence for a robust water year is high. And why not? Current water storage at the three largest CVP reservoirs Shasta, Trinity, and New Melones are at 118, 129 and 132% of their respective 15-year averages as of the end of May. Even Oroville Reservoir on the SWP side is holding almost 3.46 MAF or 96% of capacity.

So here we are again, a seemingly bountiful water year. But perspective is important. How tenuous is our water supply situation, even in this, a seemingly “good” water year? Let us focus on just one reservoir, Folsom, to demonstrate the reality of operational water resources management in California.

But why Folsom? While clearly not the largest of the CVP facilities, Folsom’s complex operational prescriptions, historic relevance, highly regulated nature, and proximity to the State’s capitol and densely populated surroundings, make it an ideal reservoir to examine.

As part of the original USBR Folsom-Auburn Unit, it was always intended to operate in conjunction with its sister reservoir on the North Fork, Auburn Reservoir. Since Auburn Dam was never built, Folsom has had to play an even greater role in multi-purpose water resources management, particularly flood control. As a result, Folsom Reservoir has one of the highest, if not the highest, yield-to-storage ratios of any CVP reservoir.

Water is lost from Folsom Reservoir through various means. At the dam, measurable withdrawals occur through the power penstocks, pumping plant (in order to serve local purveyors like the City of Folsom, City of Roseville, San Juan Water District and others), lower river outlets, and gate “spills”. Losses are also incurred through direct evaporation and infiltration into the shoreline and reservoir bottom, controlled largely by localized hydraulic gradients.

For this examination, we tracked Folsom Reservoir daily operations from January 1 through May 31st, 2019.  This Note, Part I, covers January through March (i.e., the winter).  Part II will address April and May (i.e. the spring).

Figure 1 shows a portion of the daily operations of Folsom Reservoir for the month of January 2019. The reservoir used this period to gain storage, receiving about 324,00 AF of upper basin inflow, and losing about 109,000 AF through power generation. The net change in storage was a 210,800 AF gain over the month. End-of-January storage stood at about 522,500 AF. Storage was under 400,000 AF at the time of the initial significant inflow event on January 17; the reservoir received about 63,000 AF during the 2-day period of January 17-18.  Releases through the power penstocks averaged about 1,765 AF per day during the month. No spills were made during the month of January. 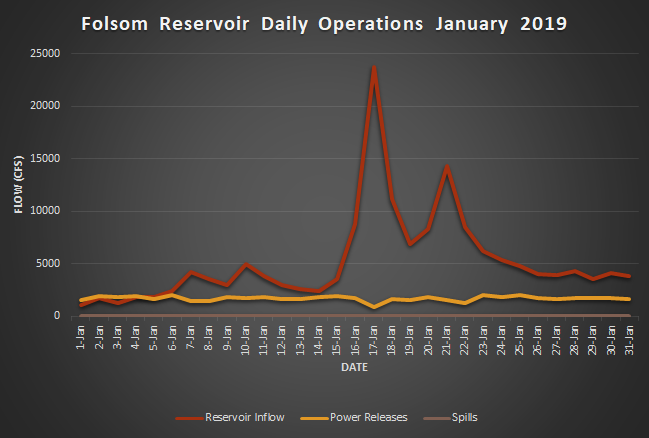 This type of operational pattern is not uncommon, particularly for this time of year. Reservoirs in general, use this period to gain storage, while maintaining appropriate empty space and remaining mindful of upper basin snowpack SWE and the potential for future major oceanic frontal incursions.

In February, however, things changed (see Figure 2). With over 9-inches of precipitation falling during the month (e.g., the long-term average for February is about 3.5-inches) cumulative WY precipitation to date totaled over 21-inches. Accordingly, operators had to deal with significant excess water. Runoff from upper basin sources were markedly increasing reservoir inflows during the early part of the month. Notable reservoir inflows occurred at several times during the month. Spills, however, did not commence until approximately February 9 and continued throughout the rest of the month (i.e., 20 out of 28 days). Daily peak spills occurred on February 27 at a flow of 15,402 cfs or over 30,000 AF/dy. 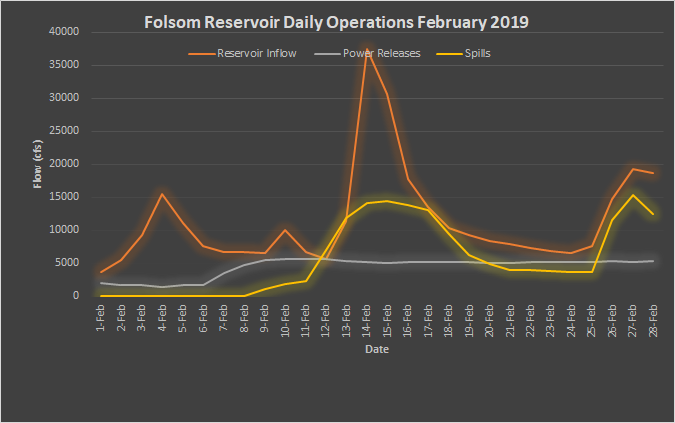 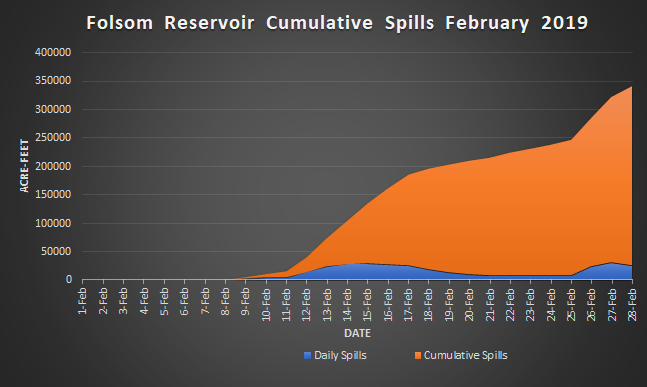 March was a significantly drier month than February, receiving about 3.8 inches of precipitation. Spills, however, continued from February through the first 18 days of March. Figure 4 shows the reservoir inflow, power releases and spills for March.  Inflows were moderate, exceeding 25,000 cfs on March 7-8th only. Outflow was largely maintained through power releases and receding spills. From mid-March onwards to the end of the month, the reservoir was gaining storage, rising about 11 feet or about 105,000 AF. 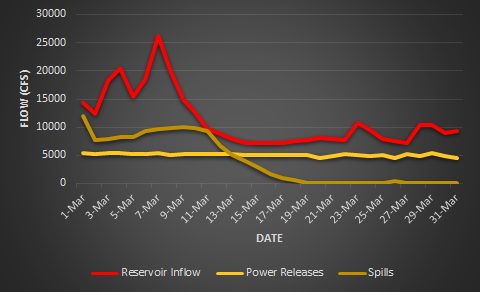 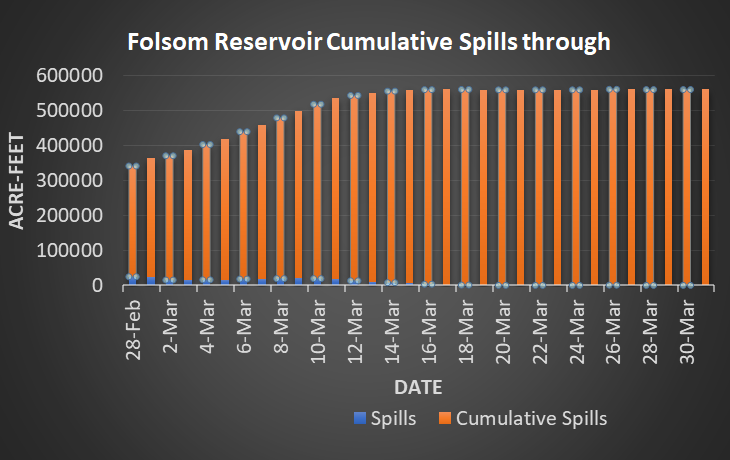 Let’s put that 560,000 AF into some kind of perspective. That quantity is approximately equal to the total normal-year water demands of the 5 major cities in the greater Sacramento Region; City of Folsom, City of Roseville, City of Sacramento, City of West Sacramento, and City of Rancho Cordova times TWO. Yes, that’s twice the quantity of water that these cities use in 2-years. Also, this quantity is only for the period January through March, spills for April and May will be presented in Part II. The bottom line is that we, by our actions at this reservoir, allowed over a half-million AF to be lost to any later beneficial use.

All “managed” water has, or at least should have a beneficial use and therefore, a purpose. “Spills”, as mandated by reservoir rule curves, represent nothing more than the emptying of a reservoir in order to meet flood control mandates. Mandates which, by the way, are set based on reservoir storage capacity, hydrologic storage and runoff generating capabilities of the upper watersheds, and long-term anticipated hydroclimate. But the spill water itself has no beneficial use; its only attribute is the empty space provided by its evacuation, or loss.

No one disputes the vital role of flood protection and that establishing empty space through “spills” is the best means of ensuring adequate reservoir flood storage capability. By the same token, however, we should be open and honest about the implications of our establishing that flood protection and how much water we deprive ourselves later in the year for beneficial uses. The reasons for that loss of water should be clearly explained in the context of California’s ongoing water shortages. Rainfall or a lack thereof is not the problem. Our water shortages are directly attributable to current storage capacities and the related reservoir operations based on that limiting storage.

This has been a recurring theme in California. Many still insist we live in a water-stressed region. I would offer instead that we live in an infrastructure and operations-constrained region.

[1] Reservoir inflows are computed from the sum of change in storage, all releases, pumping plant and evaporation.

About the Author: Robert Shibatani is a consulting hydrologist and water industry advisor with over 35-years combined experience in research, environmental analysis, consulting and expert witness litigation across the globe. He is CEO of The SHIBATANI GROUP, Inc. based in Sacramento, California. <robert@theshibatanigroup.com>

Note:  The views expressed in this commentary are the author's views, and should not be attributed to Maven's Notebook.