From the Freshwater Trust:

The Freshwater Trust (TFT), a 501(c)(3) nonprofit  working to protect and restore freshwater ecosystems, is partnering with IBM Research and SweetSense Inc. , a  provider of low-cost satellite connected sensors, to pilot technologies which can accurately monitor and track groundwater use in one of the largest and most at risk aquifers in North America. Additional research support will be provided by the University of Colorado Boulder.

Jointly funded by the Water Foundation and the Gordon and Betty Moore Foundation, the project’s scientists and engineers will demonstrate how the blockchain and remote Internet of Things (IoT) sensors can accurately measure groundwater usage transparently, and in real-time.

The sensors will transmit water extraction data to orbiting satellites and then to the IBM Blockchain Platform hosted in the IBM Cloud. The blockchain will record of all data exchanges or transactions made in an append-only, immutable ledger. The blockchain also uses “smart contracts,” whereby transactions are automatically executed when the conditions are matched.

Click here to continue reading at the Freshwater Trust.

From the Department of Fish and Wildlife:

At its February 2019 meeting in Sacramento, the California Fish and Game Commission (Commission) took action on a number of issues affecting California’s natural resources.

The Commission accepted a petition to list Upper Klamath-Trinity River Spring Chinook Salmon as endangered, setting into motion a status review to be completed by the California Department of Fish and Wildlife (CDFW).

The petitioners, the Karuk Tribe and Salmon River Restoration Council, submitted information suggesting declining population trends and a low abundance, making this stock of salmon vulnerable to extinction. The Commission action results in Spring Chinook Salmon being designated as a Candidate Species under the California Endangered Species Act (CESA), which provides Candidate Species the same protections as species listed as endangered and threatened under CESA.

Acceptance of the petition triggers a one-year status review by CDFW to determine if a CESA listing by the Commission may be warranted. CDFW, after review of the best scientific information available, will make a recommendation to the Commission on whether to list Spring Chinook Salmon as either endangered or threatened, or that listing is not warranted at this time.

The following inland salmon fishing closures were approved by the Commission through the emergency regulations:

Along with its adoption of the emergency regulations, the Commission also directed CDFW to work with stakeholders, including affected counties, fishing organizations, Tribes and conservation groups, to investigate options to allow some Spring Chinook Salmon fishing in 2019. Under Section of 2084 of Fish and Game Code, the Commission can consider hook-and-line recreational fishing on a Candidate Species. CDFW will present the results of that stakeholder collaboration and potential options using Section 2084 at the Commission’s next public meeting, which will be held April 17 in Santa Monica.

The public may keep track of the quota status of open and closed sections of the Klamath and Trinity rivers by calling the information hotline at (800) 564-6479.

The full Commission agenda, supporting information and a schedule of upcoming meetings are available at www.fgc.ca.gov. An archived video will also be available in coming days.

California Coastkeeper Alliance, Orange County Coastkeeper and California Coastal Protection Network have appealed a Superior Court ruling that upheld the decision of California’s State Lands Commission to approve the lease of state-owned tidelands for a controversial Orange County desalination project without a full environmental review. The public interest groups filed a lawsuit last October challenging the State Lands Commission’s decision, seeking a full study of costs and alternatives for the billion-dollar project, proposed by Poseidon Resources. Their appeal comes on the heels of a Municipal Water District of Orange County analysis that concluded Poseidon’s for-profit desalination plant is the least cost-effective way to meet water needs in Orange County. The county has several active proposals for rainwater capture and water recycling projects that would cost less, save energy, and reduce polluted runoff.

“We are asking the court to enforce a law designed to protect communities against corporate interests,” said Sean Bothwell of California Coastkeeper Alliance. “The State Lands Commission broke the law by shortcutting its review of Poseidon’s desalination proposal, and we want to make sure state and local decisionmakers as well as consumers understand the considerable environmental and economic cost of this project.”

“We are fortunate, in Orange County, to have more affordable and environmentally-friendly ways to supply local water needs. Recycled water and rainwater capture projects like Carson and Strand Ranch not only save money for ratepayers, they also reduce pollution,” said Garry Brown of Orange County Coastkeeper. “If state agencies conduct a full review of impacts and alternatives for Poseidon’s boondoggle, as required by law, they will find a range of problems, from the harm to fish and wildlife from its outdated intake pipe to the salty brine and outsized energy use and price tag.”

“As California works to prepare for climate change, Poseidon’s desalination project is clearly a step in the wrong direction,” said Susan Jordan of California Coastal Protection Network. “It makes no sense to build new infrastructure in the coastal flood zone with sea levels rising, nor to choose energy intensive water sources that will fuel more drought by undermining our efforts to get off fossil fuels.” 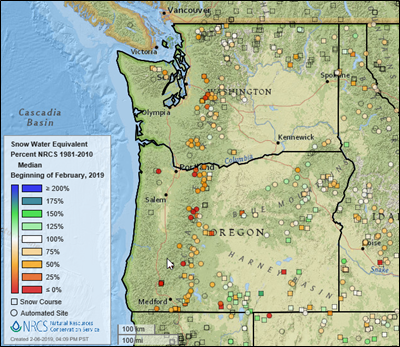 A winter storm blanketed the Pacific Northwest this week, from the beaches of the Pacific to the Cascade Range and beyond.  Snow and ice in Seattle and Portland closed schools and slowed traffic with hundreds of crashes.  SNOTEL sites in the Cascade Range reported depth increases from 1 to 14 inches in the last few days.  Although the recent snow helped to boost the overall snowpack in the region, most of the SNOTEL and snow course sites are below to well below normal for the beginning of February.  The dry winter follows a dry 2018 with the U.S. Drought Monitor reporting much of Oregon and Washington in drought conditions.  Meanwhile, in California the same storm caused rain, flooding, and heavy snow up to 10 feet in the Sierra Nevada.