NEWS WORTH NOTING: Congressman Valadao requests Congressional field hearing on CA water crisis; State Water Board reminds the public to be aware of harmful algal blooms this holiday weekend; The Bay Institute honors Chris Austin and others at the 26th annual awards

The letter explained, “As a result of unreasonable federal laws and regulations, many parts of the Central Valley have continuously experienced “man-made” droughts. Since October of 2017, California water users South of the Delta, known to be one of the world’s most productive agricultural regions, have lost over 8,600,000 acre feet of water, costing the region an estimated $1,000,000,000 in economic activity.” It went on, “I cordially invite you and the House Natural Resources Committee to see firsthand the real water loss impacts in my Congressional District, the epicenter of California’s water crisis.”

Congressman Valadao stated, “I am hopeful that by witnessing the negative impacts of this water crisis, my colleagues on both sides of the aisle will have a greater understanding of just how critical securing a reliable water supply for the region is to my constituents.”

He continued, “I welcome the opportunity to show Members of the House Natural Resources Committee exactly how this issue impacts the livelihoods of my constituents and look forward to working with the Chairman to find common sense solutions to resolve the region’s water crisis.”

The text of the letter can be found here.

In the 115th Congress, Congressman Valadao introduced H.R. 23, the Gaining Responsibility on Water (GROW) Act of 2017, legislation which promotes water policies that facilitate the delivery of California’s abundant supply of water to the San Joaquin Valley. The legislation was passed by the House of Representatives on July 12, 2017 by a vote of 230 to 190 and was subsequently sent to the Senate where it awaits further consideration.

With many swimmers and boaters expected at the state’s lakes, streams and reservoirs this July 4 weekend, the State Water Board is reminding the public to be mindful of harmful algal blooms (HABs) and to practice Healthy Water Habits, such as keeping pets away, if they see one.

Last week, the California State and Regional Water Boards conducted targeted sampling at some of the state’s most visited lakes and streams that have a history of HABs. This sampling was part of a collaborative effort with other state and local agencies to gather data and share it with the public. Those agencies included the California Department of Water Resources, Klamath Basin Monitoring Program, East Bay Regional Parks, Elem Indian Colony, Big Valley Band of Pomo Indians, and others.

“Being aware of the conditions at your local waterbody before heading out to recreate is important to keeping you and your pets healthy this 4th of July weekend, and anytime during these hot summer days when HABs can be present,” said State Water Board Vice Chair Steven Moore. “The State Water Board thanks local agencies and groups for working together to identify HABs and keep the public informed on how to safely recreate.

Please be aware that HAB location, extent and toxicity can change quickly. The data in this map is subject to change as new information is received. The interactive map can be viewed at: https://mywaterquality.ca.gov/habs/data_viewer/

Algae and cyanobacteria, the organisms that cause HABs, have existed for billions of years as essential components of freshwater ecosystems. But when certain conditions favor their growth – such as warm temperatures, stagnant water flows and excessive nutrient inputs – they can multiply very rapidly creating “blooms.” These blooms can produce toxins, and taste and odor compounds, that pose health risks to humans and animals. When blooms pose a risk, they are referred to as harmful algal blooms (HABs).

Cyanotoxins and algal toxins pose risks to the health and safety of people and pets, drinking water, and recreating in water bodies affected by blooms. They can also accumulate in fish and shellfish to levels posing threats to people and wildlife. Symptoms of HAB-related illness in people and animals are available from the Centers for Disease Control and Prevention (CDC), and by contacting the California Poison Control Center (1-800-222-1222).

Pets, especially dogs, are susceptible to HABs because they swallow more water while swimming and playing in the water. They are also less deterred by green, smelly water that may contain HABs. Animals can experience symptoms within minutes of exposure to the toxins. In the worst cases, animals have died. If your pet experiences these symptoms after exposure, contact your veterinarian immediately.

It is important to distinguish cyanobacteria/HABs from green algae and other non-toxic water plants that are not thought to pose potential hazards to health (Figure 2). HABs can be a variety of colors such as green, white, red or brown and may look like thick paint floating on the water. Cyanobacteria blooms have a grainy, sawdust-like appearance of individual colonies.

For help identifying a HAB, check out this visual guide fact sheet available on the CA HABs Portal here: https://mywaterquality.ca.gov/habs/what/visualguide_fs.pdf

From The Bay Institute:

At the Bay Model Visitor Center in Sausalito, The Bay Institute hosted an awards ceremony honoring three very special individuals: Whitney Dotson, Chris Austin, and Jeffrey Michael, PH.D. Cynthia Koehler, Executive Director of the Water Now Alliance, delivered a powerfully moving Keynote address reminding us all that we are fortunate to enjoy the pristine vistas in and around the Bay Area due to the tireless efforts of advocacy and community action to preserve and conserve what we hold dear for our future generations.

Whitney Dotson, East Bay citizen activist, East Bay Regional Park District board member, recipient of the 2018 Bay Hero Award shared memories he and his brother playing in the wetlands, Breuner Marsh to be specific, which was renamed in 2014 to the Dotson Marsh due to the Dotson family’s hard fought battle to keep that portion of the Richmond shoreline from being developed.

Chris Austin received The Harold Gilliam Award for Excellence in Environmental Reporting. Ms. Austin created and operates the award winning website Maven’s Notebook that provides comprehensive coverage of California water issues. Chris has taken her children all along Southern California’s Owens Valley and has “chased the aqueducts” with them on family trips. She has truly been a leader in the world of water news.

Jeffrey Michael, Ph.D., Director, Center for Business and Policy Research, University of the Pacific, Stockton was presented with the Carla Bay Education Award. Jeffrey stressed the importance in accurately telling the truth when giving statistical information and brilliantly compared the economy to an ecosystem. 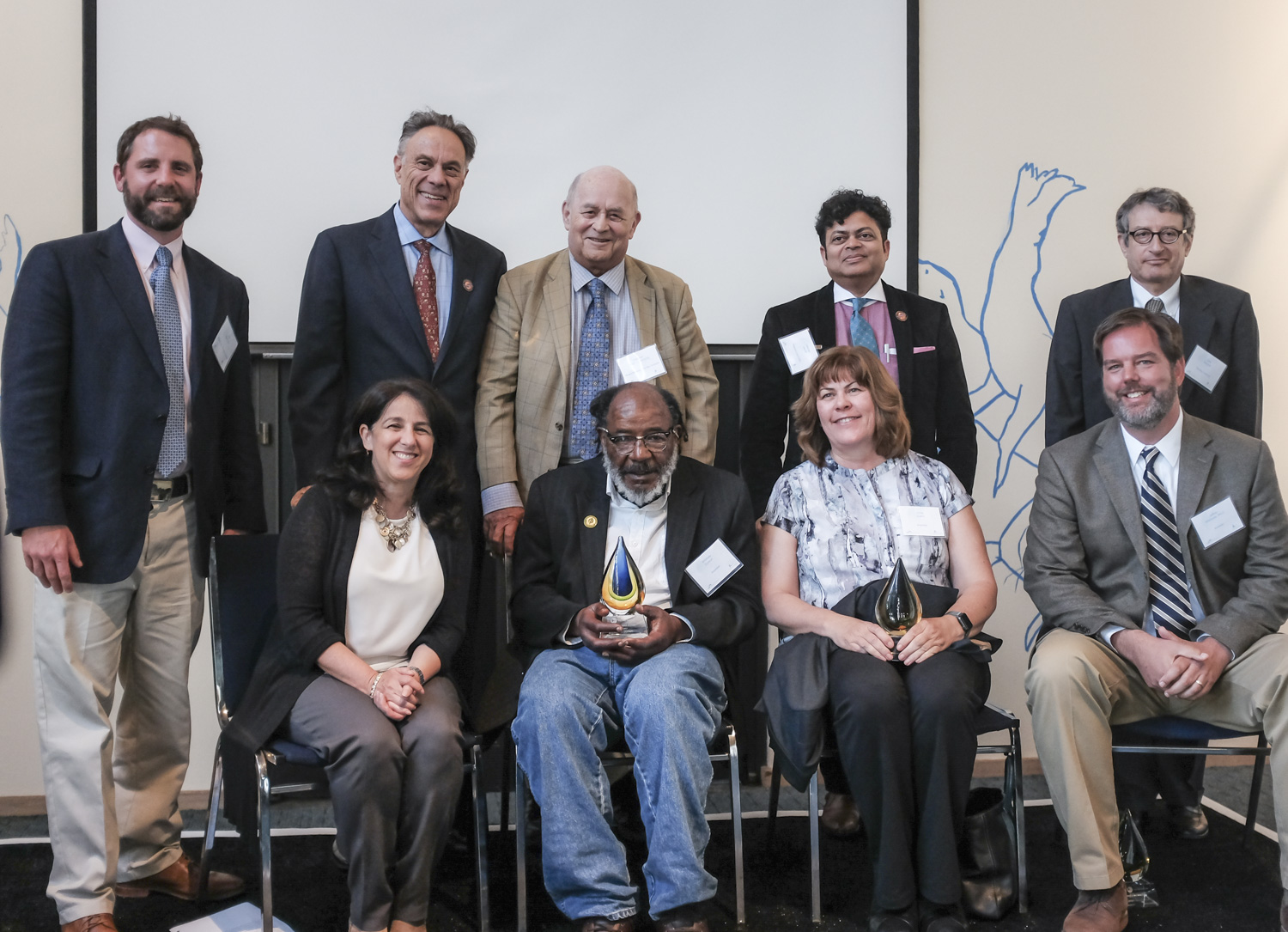 Gary Bobker, Program Director of The Bay Institute commented “Each of these individuals is exemplary in his or her own way: a leader in the fight for environmental justice and the protection of our wetlands; an economist who has debunked myths about the conflict between the economy and the environment; a blogger who has demystified the confusing and complex world of California water.”

The Bay Institute is a research, education, and advocacy organization dedicated to protecting and restoring the ecosystem of the San Francisco Bay, the Sacramento-San Joaquin Delta, and the estuary’s tributary rivers, streams, and watersheds. Established in 1981, its scientists and environmental policy experts have worked nearly four decades to secure stronger protections for endangered species and their habitats; improve water quality; reform how California manages its water resources; and promote comprehensive ecological restoration from the Sierra to the Sea™.

The Bay Institute is one of the six branches of Bay Ecotarium-Northern California’s largest non-profit watershed conservation group whose mission is to protect, restore, and inspire conservation of San Francisco Bay and its watershed, from the Sierra to the Sea™. More information can be found on the website at www.bayecotarium.org.