From the Southern California Water Coalition:

A follow-up to a 2012 conceptual focused whitepaper, SCWC’s Stormwater Task Force analyzed data from six different water agencies on 32 active projects to determine each project’s cost per acre-foot of captured stormwater. Costs ranged from $59 per acre-foot to more than $250,000 per acre-foot. 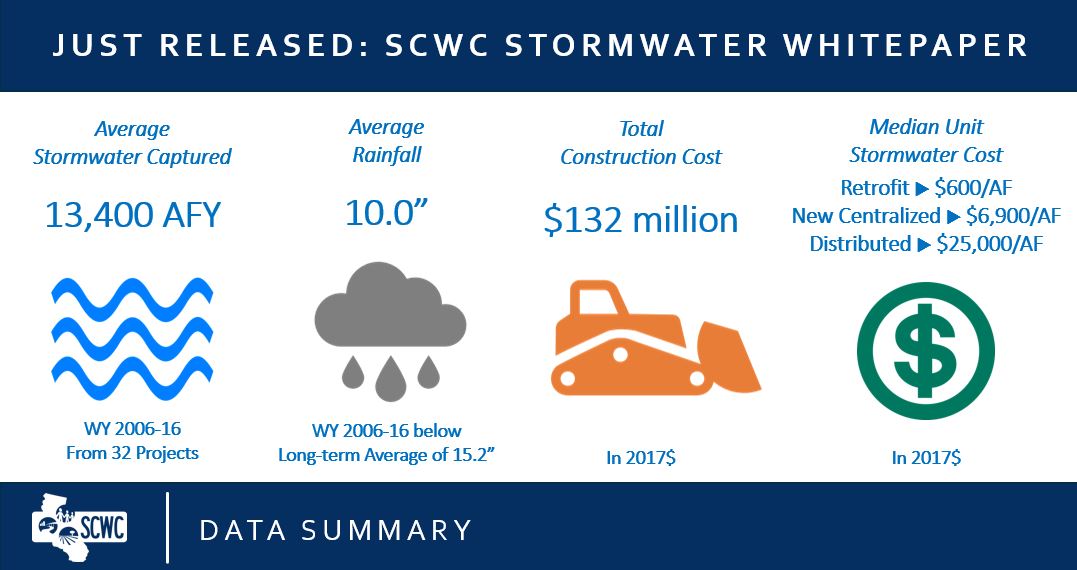 The whitepaper found that:

SCWC’s Stormwater Task Force will continue to move forward with its data collection and monitoring efforts. It will be important for the region to collaborate and exchange stormwater data between all parties, and potentially consolidate the information into a single database.

“Given that cost and climate uncertainties may continue to be a barrier for some projects, SCWC believes in an all of the above approach when it comes to ensuring the security and reliability of Southern California’s water supply,” said Charles Wilson, Executive Director of the Southern California Water Coalition. “Southern California as a region should continue to invest in a broad range of water supply alternatives including, investments in imported supply reliability, recycled water, desalination, groundwater cleanup and stormwater capture.”

Whitepaper Background:  In the spring of 2016, the Task Force embarked upon an ambitious data gathering project to get actual monitoring data – manually and/or automatically measured – for stormwater projects in Southern California. The Task Force developed a detailed data collection form to acquire actual stormwater and urban water runoff capture volumes, costs, benefits, and performance of existing stormwater projects. The form was distributed to 30 agencies across Southern California. Of 54 projects, 32 projects (from six different agencies) had complete data and were analyzed.

The California Department of Water Resources (DWR) this month completed a major retrofit to Perris Dam in Riverside County as part of a statewide effort to reduce seismic risks to dams.

Perris Dam, constructed from 1970 to 1973, was identified as a high priority state-owned dam due to its proximity to nearby faults and large downstream communities. The seismic retrofit to Perris Dam began in 2005 as one of three major projects to improve seismic stability and enhance public safety at the Perris complex.

“DWR used state-of-the-art engineering techniques to modernize this dam as part of our ongoing effort to upgrade California’s aging infrastructure, especially its network of dams,” said Karla Nemeth, DWR Director. “Our safety engineers continuously monitor our dams to identify any potential future problems. We’re committed to making the necessary investments to upgrade our infrastructure to protect our water system and enhance public safety.”

Earthquakes pose some of the highest risks to dams in California. Since the late 1990s, DWR’s Division of Safety of Dams has conducted in-depth investigations and re-evaluations of dams located near seismic faults. Over the past 20 years, dam owners throughout California have spent approximately $1.5 billion on seismic improvements to dams.

Upgrades to the 130-foot tall, earthen dam included strengthening roughly 800,000 cubic yards of foundation material by mixing cement with soil and reinforcing it with a 1.4 million-cubic-yard earthen stability berm placed on the downstream side of the dam. The dam upgrades were designed to withstand a magnitude 7.5 earthquake.

In 2005, Lake Perris’ water level was lowered 25 feet under a restriction ordered by DSOD to ensure public safety while the state identified the seismic risk and developed a plan to address the dam’s seismic stability deficiencies. With completion of the dam remediation project and approval by an Independent Consulting Board of recognized dam safety experts and DSOD, DWR began a controlled refilling of the reservoir on March 5, 2018. Depending on rainfall and DWR operations, the reservoir likely will resume normal operational capacity by the end of the year.

The dam remediation is one of three major projects to improve seismic stability and enhance public safety in the Perris Dam Remediation Program. Other projects include the Outlet Tower Improvements, with completion planned for 2021, and the Emergency Release Facility (ERF) Project, with completion planned for 2022. The ERF project provides improvements downstream of the reservoir that would direct the flow of water in an emergency requiring the dewatering of the reservoir. Flows would be directed through a series of berms and lined and unlined channels that would ultimately terminate at the Riverside County Flood Control and Water Conservation District’s Perris Valley Channel. The Outlet Tower and Emergency Release Facility projects enhance the safety of the dam for other risks in addition to that posed by earthquakes.

For information about the remediation projects, visit https://www.water.ca.gov/Programs/Engineering-And-Construction/Perris-Dam-Remediation

Lake Perris is the State Water Project’s southernmost facility and the terminal storage facility on the East Branch. When construction on Perris Dam remediation began in fall of 2014, access to the southeast side of the Lake Perris State Recreation Area was closed to the public. Access to hiking trails, undeveloped campsites, and rock climbing will be opening soon. For more information about recreational opportunities, contact the California Department of Parks and Recreation at 951-940-5600.