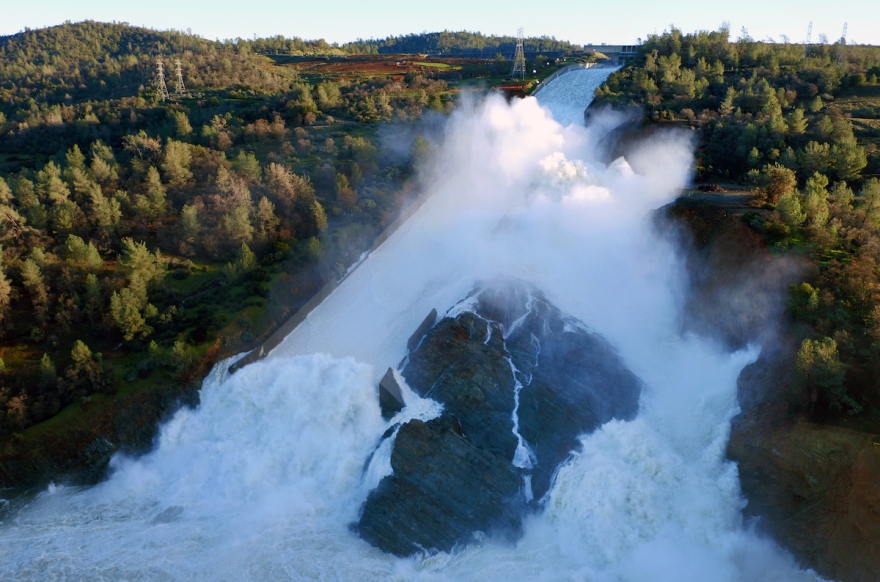 In California water news this weekend, Lake Oroville flows over its emergency spillway for the first time, repairs could top $200 million and more dam news; Is California overdue for biblical catastrophic flooding?; 215 billion gallons has poured into Shasta Lake since February 1; North Delta island levee lowered in hopes of avoiding downstream damage; Has California lost billions of gallons in uncollected rain water?; Sinking land causes California water chokepoint; Is the drought over yet? That might not be the right question to ask; Governor Brown seeks disaster declaration for California flooding; California rivers are so swollen with runoff that the impact is easily seen in these before and after satellite images; As sea levels rise, vital salt marshes are disappearing; and more …

In dam news this morning …

For all of the Notebook’s coverage of the Oroville Dam spillway damage, click here.

Lake Oroville solution includes emergency spillway down hillside:  “An emergency spillway at Lake Oroville was put into play Saturday, marking the first time of use since the dam was completed in 1968.  There’s no lever to press. The water merely flows over the side of the embankment once the lake reaches more than 901 feet.  That happened at about 8 a.m. Saturday when approximately 668 cubic feet per second of water started flowing down the hillside, headed toward the Feather River. ... ” Read more from the Chico Enterprise-Record here:  Lake Oroville solution includes emergency spillway down hillside

Emergency spillway used at Oroville Dam for the first time:  “Water began roaring into an emergency spillway at California’s state’s tallest dam for the first time ever Saturday to protect the regular Oroville Dam spillway severely damaged during heavy storms.  The state Department of Water Resources said mid-day Saturday that it expects to pour water into the backup, earthen spillway for 40 to 56 hours until water levels start receding in Lake Oroville in Butte County. Officials said they are confident no flooding will result downstream on the Feather River for at least the next week, including during a modest storm expected Thursday. After that, however, they said they cannot guarantee that no flooding will occur if another “atmospheric river” dumps a heavy downpour on a soggy Northern California. ... ”  Read more from the East Bay Times here:  Emergency spillway used at Oroville Dam for the first time

In other water news this weekend …

215 billion gallons has poured into Shasta Lake since February 1:  “As a series of moisture-packed storms drench Northern California this year, Lake Shasta is seeing an impressive turnaround from near record lows.  California’s largest reservoir has received some 215 billion gallons of water since Feb. 1 and as a result the lake level rose 25 feet since the start of the month, as of Friday. To put that in perspective, the San Francisco Public Utility Commission says the entire Hetch Hetchy Reservoir “can store up to 117 billion gallons of drinking water.”  Over 24 hours this week alone (Feb. 8 to 9), Shasta’s water level shot up eight feet. … ”  Read more from SF Gate here:  215 billion gallons has poured into Shasta Lake since February 1

North Delta island levee lowered in hopes of avoiding downstream damage:  “Work crews took emergency action Saturday to lower a portion of the ring levee surrounding the McCormick-Williamson Tract in an attempt to avoid a catastrophic “flood pulse” that last occurred in the floods of 1997.  The tract is a North Delta island just downstream of the confluence of the Cosumnes and Mokelumne rivers, just northeast of the Delta Cross Channel. The 1,600-acre island is owned by The Nature Conservancy in California. It’s adjacent to Staten Island.  Ryan Luster, Delta project director for the TNC, said Saturday that the TNC learned from experts on Friday that water flows along the tract would be strong enough to cause a levee breach similar to the one that occurred in the rainstorms of 1997. … ”  Read more from the Sacramento Bee here:  North Delta island levee lowered in hopes of avoiding downstream damage

Sinking land causes California water chokepoint:  “Unchecked groundwater use is colliding with seesawing weather patterns to produce a new act in California’s long-running tragedy of the commons.  According to NASA and European Space Agency data released on February 8, parts of the California aqueduct on the west side of the San Joaquin Valley, near Avenal, sank more than two feet between 2013 and 2016 as farmers pumped records amounts of groundwater during the state’s historic drought.  The aqueduct is the 444-mile-long main artery in the state’s north-south water canal system, which was built in the 1960s. The system delivers water from reservoirs in the Sierra Nevada mountain range to 25 million urban residents and nearly one million acres of irrigated farmland in southern California. ... ”  Read more from the Circle of Blue here:  Sinking land causes California water chokepoint

State: Ground sinking near Corcoran, Avenal:  “The ground is sinking near Avenal and Corcoran, and the drop is damaging the California Aqueduct, according to a report released this week from the California Department of Water Resources.  The report identified agricultural groundwater pumping alongside the Aqueduct in a section near Avenal as the cause of a buckle in the Aqueduct’s cement-lined channel.  The report says the buckle is causing a 20 percent loss in the Aqueduct’s capacity to carry water. … ”  Read more from the Hanford Sentinel here:  State: Ground sinking near Corcoran, Avenal

As sea levels rise, vital salt marshes are disappearing:  “The Ridgway’s rail is a rare bird that relies on the salt marshes south of Los Angeles to survive. And that’s why its future is in doubt — the salt marsh is disappearing under rising seas.  Scientists working with the federal government said the rail’s plight at Seal Beach National Wildlife Refuge is indicative of what’s happening to salt marshes around the country.  Their assessment of eight of the country’s coastal salt marshes found that half will be gone in 350 years if they don’t regain some lost ground. The other four also are backsliding, and coastal communities and wildlife will suffer as the marshes continue to deteriorate. … ”  Read more from the Fresno Bee here:  As sea levels rise, vital salt marshes are disappearing

Twin tunnels prevent general water solutions, say Karen Mitchoff and Diane Burgis:  They write, “This winter and spring may forever be known – like many fishermen would say – as “the one that got away.”  Over the past two months, California has experienced a series of severe storms, which caused numerous cities and counties to declare states of emergency. Rather than having the necessary storage capacity in place to collect and store storm water runoff for future use, massive amounts of rainwater from our bountifully wet winter flowed down swollen creeks and rivers, through the Delta and out the San Francisco Bay to the ocean. It’s water that we desperately need during drought conditions like those we’ve experienced for much of the last decade. … ”  Read more from the East Bay Times here:  Twin tunnels prevent general water solutions

Shasta dam release may cause flooding through the weekend:  “Areas of Red Bluff River Park were blocked off Friday as water levels were expected to rise once again over the weekend causing possible flooding throughout the park, similar to Monday’s floods, and other areas within Tehama County due to the increased releases below Keswick Dam in Shasta County.  The Sacramento River water levels have decreased since Monday, but that may change as the Bureau of Reclamation began incrementally increasing releases from the dam late Thursday The bureau is expected to release 70,000 cubic feet per second by Sunday. ... ”  Read more from the Red Bluff Daily News here:  Shasta dam release may cause flooding through the weekend

Owens Valley: Technical group blasted on new West Bishop wells:  “Some Technical Group meetings are short and dry; Thursday morning’s wasn’t either.  All the big guns stepped up in strong opposition to two new wells in Bishop, B-2 near the Gun Club and B-5 in West Bishop, south of Schober Lane. The agenda item was “consideration of a pre-construction evaluation report” on the two wells, a formal acknowledgement by both entities, Los Angeles Department of Water and Power and Inyo County, that the joint-report was completed. But for those in attendance, it was a step in the wrong direction, at least until pumping impacts in the valley are fully mitigated and current environmental studies are done. … ”  Read more from the Sierra Wave here:  Owens Valley: Technical group blasted on new West Bishop wells

Diversifying Ventura’s water portfolio:  Erik Nasarenko and Shana Epstein write, “In 10 years, Ventura’s water supply could be substantially different than it is today. The goal is to make Ventura less susceptible to the boon years of high rainfall and the inevitable periods of drought and water shortages, and to continue to produce a safe and reliable water product at a cost-effective price for residents to drink.  Ventura has long looked to Mother Nature for water, relying exclusively on local precipitation to stock Lake Casitas, keep the Ventura River flowing and recharge local groundwater basins. But as this six-year drought and other droughts illustrate, our dependence is problematic because it rests squarely with what Ventura cannot control: the weather. … ”  Read more from the Ventura County Star here:  Diversifying Ventura’s water portfolio

NASA improves snowmelt forecast in Colorado River basin:  “NASA is keeping track of dust that settles on snow in the Rocky Mountains. The research will help hydrologists improve their predictions for how fast the Colorado River will rise this spring.  Michelle Stokes is a hydrologist for the Colorado River Basin Forecast Center in Utah. Her job is to project how much snowmelt will flow into the Colorado River and when it will arrive.  “It’s been known for a long time that if there’s a lot of dust on the snow it’s going to melt faster,” she said. “We always thought it would be really nice if we could quantify that, because it would improve our forecast, especially the timing of when the runoff comes.” ... ” Read more from KJZZ here:  NASA improves snowmelt forecast in Colorado River basin

From the National Weather Service:  “Dry weather will dominate through Tuesday, then another warm and wet storm will arrive across the region Wednesday into Thursday. Showery conditions dominate Friday and Saturday as a colder low pressure area moves inland over Central California with lower snow levels. River levels will rise and continue to pose problems late this week and into early next week due to more weather system, but lower snow levels may limit flooding impacts.”