The winter issue of Delta Voice, a publication of the Delta Protection Commission is now available.  In this month’s issue:

The State of the Bay 2015 (SOTB) report, produced by the Santa Monica Bay National Estuary Program (SMBNEP) over a five-year period, is published and released today for free as a special issue of Urban Coast: http://urbancoast.org/.  The SOTB report is a science-based comprehensive assessment of the environmental conditions of Santa Monica Bay and its watershed.  The report’s primary goals are: to measure progress in restoring the Bay’s natural habitats and resources, to educate the public about the Bay’s valuable natural resources, and to identify the challenges facing scientists and managers charged with the protection and management of the Bay and its watershed. This SOTB is the fifth such report published by the SMBNEP since 1993. 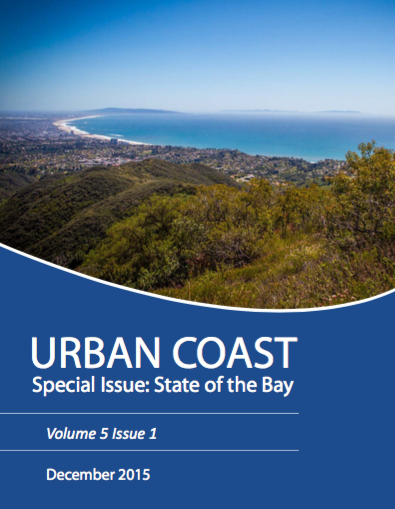 The SOTB 2015 report celebrates progress in categories such as water resources management and improving habitat conditions as a result of restoration efforts.  The report also examines the work still to be done in these areas, and identifies emerging issues we must begin to tackle in the next five years.  The report is informed and largely prepared by SMBNEP’s Technical Advisory Committee (TAC), a group of experts in their respective fields, gathered to apply the best available science and management strategies to SMBNEP’s restoration work and to the SOTB report.

The report points out that most habitats in most areas of the Bay and its watershed are degraded to some degree due to human disturbances.  With a continuously growing population, it would be nearly impossible for this not to be the case.  The SOTB 2015 report includes discussion and articles pertaining to seven habitats—Freshwater Aquatic and Riparian, Coastal Wetlands, Sandy Shores, Rocky Intertidal, Rocky Reefs, Soft-Bottom Benthos, and Coastal Pelagic—with status, trends, and suggested improvement projects.

The State of the Bay 2015 report is a special issue of the multidisciplinary scientific journal Urban Coast.  The report is produced by SMBNEP partners The Bay Foundation (TBF) and the Santa Monica Bay Restoration Commission (SMBRC), along with the Center for Santa Monica Bay Studies at Loyola Marymount University (LMU), a joint program of TBF and the Seaver College of Science and Engineering at LMU.  The SOTB conference in September, held at LMU, presented some of the findings, articles and methodology that comprise the report.

Click here to read the special issue of Urban Coast.

Weekly National Water and Climate Update: Snow at normal levels or above in many parts of the West

The current snow water equivalent percent of median map shows that the snowpack in the West is primarily at median or above at this time. Many stations in Washington, Oregon, Nevada, California, Idaho, Utah, Arizona, New Mexico, and Colorado are reporting above 150% of median.  The Bighorn Mountains of Wyoming, some stations on the eastern slope of the Rockies, and stations in western Wyoming, northern Idaho, and Montana have below median snowpack at this time.

The National Water Center’s current snow depth map for the continental U.S. shows areas of significant snow accumulation across much of the West and from the northern Great Plains to the upper Midwest. There is also a building snowpack across the Great Lakes to New York and New England. New snowpack for this week is reported in northern Texas, the central Great Plains, and the Appalachian Mountains.