From the California Weather Blog, a two-part update:

“The second major California heatwave of 2014 is now well underway, with record-breaking temperatures occurring or expected over the next 2-3 days over much of California. In addition, strong offshore (Santa Ana) winds are occurring in Southern California–and combined with record-warm temperatures and exceptionally low humidity, dangerously high early-season fire weather conditions are now in place. Temperatures across most of the state are expected to peak on Wednesday, with many warmer areas approaching or exceeding 100 degrees. Even the immediate coastline will be pretty hot–the beaches in Southern California will be in the 90s, and the areas along the water as far north as the Bay Area could approach 90.

Temperatures will cool as the heatwave wanes by late week, with substantially cooler conditions expected by the weekend. Around this time, a new Santa Ana wind event may develop as a new region of low pressure drops southeastward just to the north and east of California, possibly bringing a few mountain showers but most notably tightening pressure gradients over California and bringing strong winds once again across a wide region (with attendant fire weather concerns). … ” 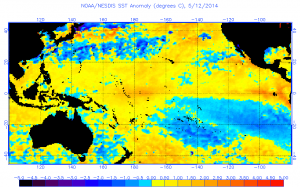 “One of the few things growing more rapidly than the Eastern Pacific sea surface temperature anomalies in recent weeks has been media speculation regarding the future evolution of El Niño conditions in the equatorial Pacific Ocean and potential meteorological impacts upon various regions around the globe.

Given the recent explosion in interest regarding El Niño and its potential effects upon California in particular, I’ve attempted to summarize some of the most important aspects of the developing event and the science behind it. While this discussion is by no means exhaustive, hopefully it provides a helpful starting point in navigating what appears increasingly likely to become a rather interesting year from a global climate perspective. … ”